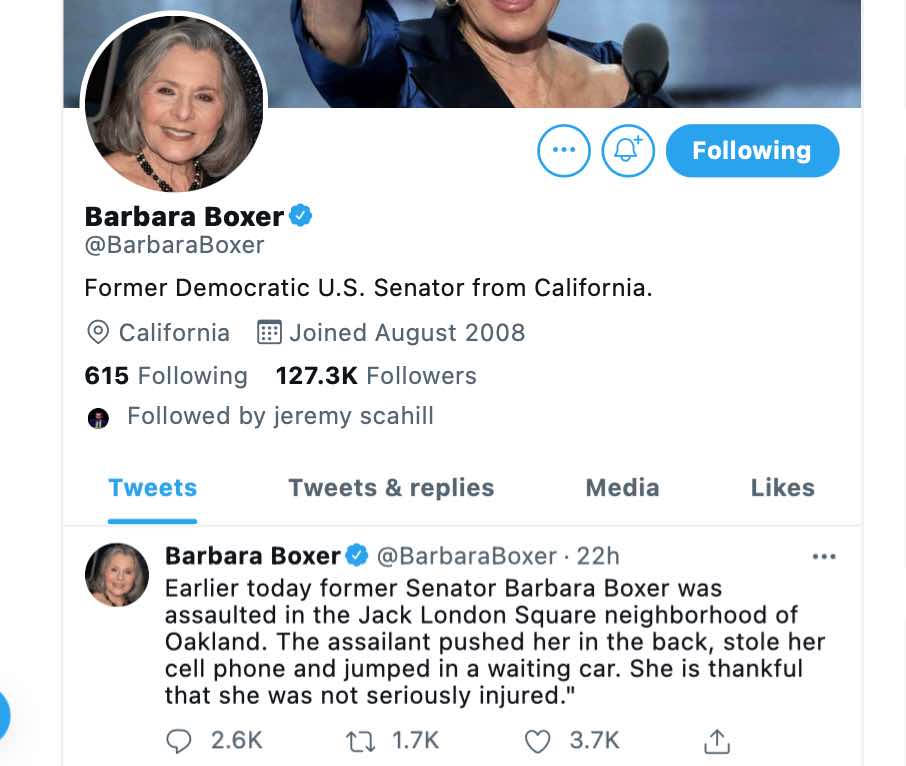 Former Senator Barbara Boxer—one of the few high-ranking US office holders known to have spoken out against the 9/11 false flag coup d’état and the related assassination of her friend and colleague Sen. Paul Wellstone—was robbed of her cell phone yesterday in a brazen assault in Oakland. The crime, which is being reported as an ordinary robbery (despite the muggers’ suspicious lack of interest in Boxer’s cash and credit cards) occurred around 1:15 p.m. in Jack London Square. A post on Boxer’s verified Twitter account stated: “The assailant pushed her in the back, stole her cell phone and jumped in a waiting car. She is thankful that she was not seriously injured.”

Like the Biden Administration’s recent erasure of thousands of archived 9/11-related stories by the world’s leading pro-9/11-truth international TV network, Press TV, the Boxer cell phone theft may represent a neocon attempt to get out in front of possibly damaging developments during the run-up to the 20th anniversary of the mother of all false flags.

Barbara Boxer is not the only former US Senator to have spoken out on 9/11. The late former Senator Mike Gravel told me there was “no question in my mind that 9/11 was an inside job.” How many others with similar private words and thoughts are out there—and perhaps in Sen. Boxer’s address book? Are some of them considering speaking out before the 9/11 anniversary?

Sen. Boxer, who multiple sources report has confidentially admitted that she knows 9/11 was an inside job, has publicly confirmed that she does not trust the 9/11 Commission version of events, specifically the official narrative of the alleged 9/11 hijackers. The following exchange took place between Senator Boxer and myself on Wisconsin Public Radio’s program “Conversations with Kathleen Dunn” on December 5th, 2005  (here is the location of the now-erased archive — note that the text below is a summary, not a transcript):

Barrett: Senator Boxer, I’d like to thank you and Senator Feingold for hanging in there after 9/11…(Boxer: “You’re welcome.”) Now as you may know, Congressman Kurt Weldon has been screaming from the rooftops that we need a new 9/11 Able Danger investigation focusing on what US intelligence agencies knew about Mohammad Atta and when they knew it. Newsweek and other mainstream publications have written that Mohammad Atta was trained at the Foreign Officer’s school Maxwell Air Force Base in Alabama. And Daniel Hopsicker’s book Welcome to Terrorland makes it clear that Hoffman Aviation in Venice Florida, where the so-called hijackers trained, was actually a CIA drug import facility—it was a flight school in name only. Now Lt. Colonel Anthony Shaffer has blown the whistle—he says he and his colleagues in military intelligence identified Atta as a terrorist in 2000, but they were gagged and ordered to “forget they had ever heard of Atta.” Are you among the 245 senators and representatives who have signed Congressman Weldon’s letter demanding a Congressional investigation into what US authorities knew about Atta prior to the 9/11 attacks?

Senator Boxer: That isn’t what the 9/11 Commission Report said—but that doesn’t mean it isn’t true. I haven’t seen Congressman Weldon’s letter yet, but…we need to pursue the truth about 9/11 wherever it leads. The truth should be the only priority. And we need the truth. My main focus now, though, is to end the war in Iraq.

I republished the above paragraphs recounting my conversation with Sen. Boxer in May 2010 after interviewing Prof. Don Jacobs (Four Arrows) about his revelation that Senator Boxer has confirmed that she knows that the neocon 9/11 perps murdered Senator Paul Wellstone in order to send “a message to us all.” As I reported:

Scholar-activist Four Arrows, co-author of American Assassination: The Strange Death of Senator Paul Wellstone, today revealed for the first time a reported conversation in which U.S. Senator Barbara Boxer (D-CA) confirmed that the Wellstone plane crash was an assassination, not an accident.

As Four Arrows recounted on today’s edition of The Kevin Barrett Show (beginning somewhere around the 20 minute mark): a trusted friend of his, during a conversation with Sen. Boxer, was surprised when the Senator asked “are you a friend of Four Arrows?” The friend said yes. Boxer said “tell him he doesn’t know how right he is. (The Wellstone assassination) was meant as a warning to all of us.” Sen. Boxer went on to say that if asked, she would deny the statement.

Why would someone want to steal Sen. Boxer’s cell phone exactly six weeks before the 20th anniversary of 9/11? Is she suspected of conferring with other high level political figures about possibly pushing back against the propaganda narrative that will soon be blitzing the USA and the world from the Deep State’s “mighty Wurlitzer“?