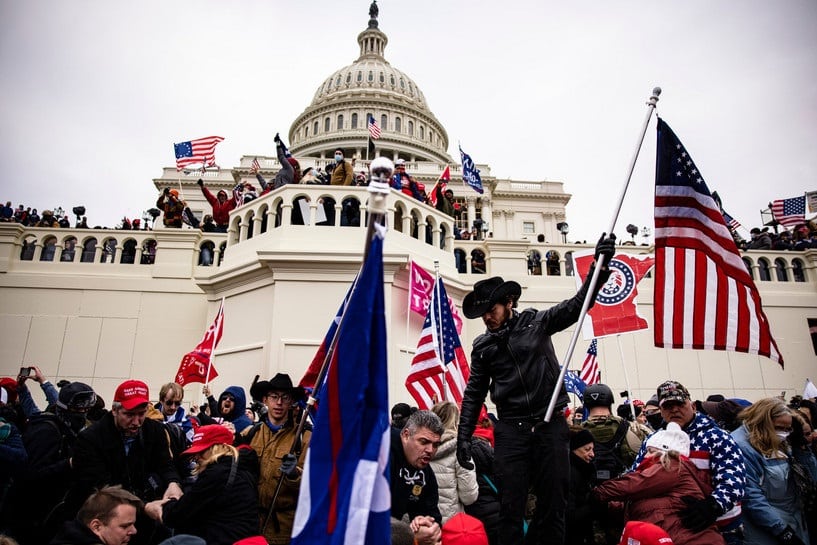 [ Editor’s Note: The Insurrection hearing cranked up with the stars of the event, the Capitol police who got to savage Trump for his reference of ‘hugs and kisses’ schmooze which might have worked with this braindead followers but was dead on arrival with everyone else today.

Sadly the Repubs are showing no embarrassment to their position on the Insurrection, where I will use a new name for it that I have been saving. It was Trump’s 9-11 attack on the Capitol, the certification, and the reputation around the world for the democracy.

It was a political terror attack, where he watched it all on TV. Trump deserves prosecution, because he cannot have presidential immunity for attempting to overthrow the government which is exactly what he tried to do using sacrificial chumps to do the dirty work while he watched.

If the Republican Party can piss all over it, without the slightest embarrassment, then it has handed that right to anyone else, anywhere, for whatever reason they choose.

I am wondering why the term ‘disloyal’ is not being used more to describe who did what to whom? Is it because of the harsh penalties that term suggests?

The Insurrection Fellini type movie continues, with both parties having to keep pending issues in separate political boxes to not contaminate them. Legislation has to be passed, not the least of which is the $2 billion to defend the Capitol, which no one understands yet why such a phenomenal amount is needed.

It would be cheaper to continue to Zoom everybody in so there is no one to defend on scene. But I know that does not make for exciting political TV.

Biden has quite a balancing act to get through the summer what needs to be done before the August recess… Jim W. Dean ]

“And for all the overheated rhetoric surrounding this committee, our mission is very simple,” Kinzinger added. “It’s to find the truth and it’s to ensure accountability.”

“We represent the good side of America,” Dunn said, referring to people who are working to get the bottom of what happened on Jan. 6. “Whether we disagree with how [others] vote on a bill about infrastructure, everybody wants the right thing.”

Dunn later questioned the rationality of a political climate that results in Cheney and Kinzinger “being lauded as courageous heroes” for their agreement to participate in the Democratic-led probe that’s expected to home in on former President Donald Trump.

“While I agree with that notion, why? Because they told the truth? Why is telling the truth hard?” Dunn asked lawmakers. “I guess, in this America, it is.”

Cheney, who made clear at the outset that she hopes the committee would delve deeply into the White House’s actions during the riot, began her questions by asking Capitol Police officer Aquilino Gonell how it felt to hear Trump describe the Jan. 6 rioters as a loving crowd.

Gonell responded that it was “upsetting” and a “pathetic excuse for his behavior,” adding that “I’m still recovering from those hugs and kisses that day.”

“If that was hugs and kisses, then we should all go to his house and do the same thing to him,” Gonell said, later apologizing for the “outburst” and making clear that he does not support people going to Trump’s home.