[ Editor’s Note: You know what I am going to say here…”another one bites the dust”, and at a wedding reception no less. I suspect the good Cardinal thought that everyone would be too distracted to notice he and the boy (I assume) missing for a while.

This story was a big surprise, as I thought the statute of limitations would have covered him, so I am happy I was wrong. At McCarrick’s age and with court backlogs, he will probably be dead before he is ever convicted.

So much the better then, as he will be roasted on the fire sooner. VT had a very highly placed Vatican source that disclosed the pedophile victim count at 500,000. That’s a lot, and despite the huge number, the top people hid it for many years.

The church has paid out a fortune in damage settlements, so some justice there. The lay Catholics might have been better off to overthrow the priests and take over the church with the lay community running it so lie detector tests could have been made a routine part of the priesthood.

I feel sorry for all the priests not involved in the perversion, as some of the stain splashed on them. The Cardinal was quite active. He liked the kids and the seminarians both. But at least one more family got to see justice starting to be done for their victim.

There are certainly plenty more of them out there. Dear lay Catholics, good hunting… Jim W. Dean ] 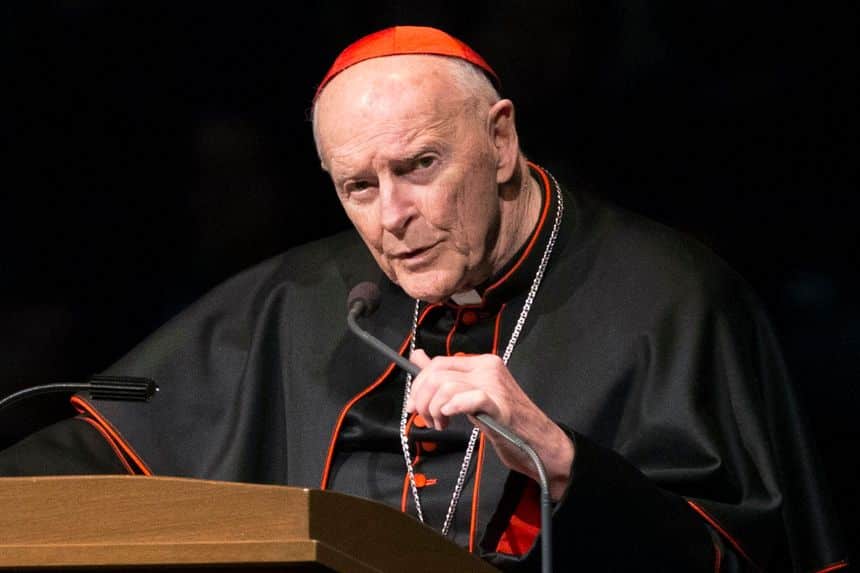 Defrocked Catholic cardinal Theodore McCarrick was criminally charged Wednesday with sexually assaulting a 16-year-old boy during a wedding reception at Wellesley College in Massachusetts in 1974, according to court documents obtained by The Washington Post.

The charges make McCarrick, a former archbishop of Washington, D.C., the highest-ranking Catholic official in the country to face criminal charges for alleged sex abuse.

McCarrick, 91, was for years one of the country’s most connected and influential Catholic leaders before allegations of his behavior were made public in 2018, and he was later expelled from the priesthood.

It was long assumed McCarrick would not be criminally charged because of statute of limitations on alleged incidents, though some men have filed civil lawsuits in New York and New Jersey, alleging McCarrick sexually abused them in those states when they were children.

Marci Hamilton, an attorney with Child USA, said the case was able to be prosecuted because McCarrick was not a Massachusetts resident and the statute of limitations essentially expired when he left the state. Hamilton said that such statutes of limitations are quite common across the United States but that McCarrick’s case is highly unusual.

“This is extraordinary,” said Hamilton, who is a professor at the University of Pennsylvania. “Prosecutors feel safe filing charges even against bishops. It shows us the movement for sex abuse cases is becoming mature.”