by Salman Rafi Sheikh, with New Eastern Outlook, Moscow, and the Institute of Oriental Studies of the Russian Academy of Sciences, a research institution for the study of the countries and cultures of Asia and North Africa.

[ Editor’s Note: Biden had no cards to play here. He was is in fanny covering mode from the expected Republican claims of Biden being weak on Russia. That was bogus from the beginning, as their was zero chance that Europe was going to let Biden, or any American president have veto power on an energy deal for the next generation.

The media hype on that and the conservative disinfo machine was nothing more than stirring the conflict threat plots to keep draining money out of the civilian economy and into the domestic.

Germany is soon to be closing down its last nuclear plants, and it is winding down its domestic coal industry. The country is not in revolt. Merkel is not hated and despised.

National leaders have to take the long view over major changes, and it will be a cold day in hell where after all the sacrifice the Germans have gone through for the commitment to going green, the last thing they are going to do is let some American political grifters call the shots for them.

The Ukraine is the fly in the ointment in the current battle. Its gas transit infrastructure is in shambles through neglect and budget money being stolen by everyone able to do so. Russia isn’t about to get into a situation where Ukraine would get it over a barrel.

Putin’s people have already posed selling the gas to an EU consortium at the border so it has its money in its pocket, leaving the EU to enjoy being scammed and robbed by the Ukrainians.

As Gordon does so love to say, “Welcome to how the world really works.” The EU once had $100 billion trade surplus with Russia, which it handily paid with the $100 billion in EU gas revenues, a win win for both sides until some psyop entity decided to wreck it.

And last, the Minsk ‘peace’ deal was where France and Merkel’s Germany were guarantors for Kiev fulfilling its commitments to Donbass, but they did nothing when Kiev stiffed the Donbass region via not only its continuing warfare, but wanting to take over the region. Don’t expect Russia to trust the West on a deal any time in the near future… Jim W. Dean ] 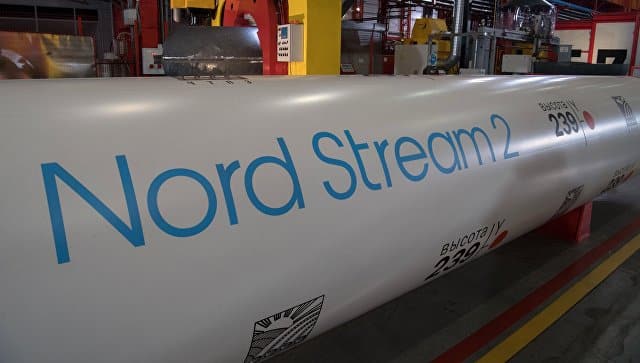 The US ‘decision’ to not stand in the way of Nord Stream 2 is hardly a surprise.

While the US officials made their decision to look like a diplomatic victory for them when they said that the US “will not tolerate Russia using energy as a geopolitical weapon in Europe or escalating its aggression against Ukraine”, it remains that the US did not have any leverage to force press Germany into submission.

Even though German officials have confirmed that they will invest 175 million dollars in Ukraine’s ‘green energy’, and that Moscow-Kiev would extend energy transit agreements, these agreements fall seriously short of the US objectives i.e., dismantling the whole Nord Stream 2 project in favour of US energy supplies to Europe.

While Germany, by agreeing to invest in Ukraine, simply bought its way out, the fact remains that with 99 per cent of the project already complete, it was always difficult for the US to block the completion of its last leg, and that too at the expense of its relations with Germany, which could have boiled down to a full blown crisis within NATO itself at a time when the US needs this organisation to counter China.

The Joe Biden administration was made to realise that Germany is too assertive to be simply coaxed into abandoning the project, and that the situation is quite likely to remain unchanged even after the change of government after the up-coming elections in Germany. This is because an overwhelming majority of people in Germany support the project, a fact that any German leader can ignore only at the expense of his/her political fortune.

A recent survey conducted in May showed that about 75 per cent of the Germans support the project, while only 17 per cent oppose it. Popular projections, therefore, show that there is no serious support for the US policies in Germany.

As the Chairman of the Committee on Eastern European Economic And Eastern European Affairs, Oliver Hermes, said, the results show “a clear mandate to the current and future federal government and German politics as a whole not to bow to sanctions demands against the project.” The message to the US is clear and unequivocal: Germany being the EU’ most powerful and influencing country cannot be browbeaten into submission.

Therefore, the US failure in making Germany toe the US line signals a massive decline in the US power, especially when the US officials affirmed that they will continue to work “together with our allies and partners to impose significant costs on Russia, including in the areas of sanctions and energy flows, if it engages in these malign activities.” In reality, however, the Joe Biden administration knew that US sanctions would not be able to block the project.

They knew that the US sanctions could be easily circumvented. For instance, after the Trump administration imposed sanctions on firms laying the Nord Stream 2 pipe across the Baltic Sea, the Russians sent their own ships, and the work is almost finished, even though the US had blacklisted those ships as well.

In other words, it is the combined impact of failed strategy of sanctions and German assertiveness that reveals fast declining American supremacy, even after Joe Biden’s announcement about the US ‘return’ to global affairs after a four year long collapse into ‘America First.’

Biden’s projections about American return to global stage has, as it stands, not been able to steer the course of events to its desired direction, putting a question mark on its ability to achieve its objectives in the future.

In other words, even though the US officials were quick to make upbeat analysis of their ability to ensure Ukrainian interests, it remains the US has failed to impose any political restrictions on the development of Russia-Germany ties.

It remains that Nord Stream 2 will have a kind of impact on Russia-Germany relations that will help the latter further position itself as a player independent of the US influence. In other words, Germany’s success in asserting its sovereignty will only strength its habit of doing so whenever its interests are threatened by the US.

Even as far as Ukrainian position is concerned, it is Russia rather than the US that stands to gain from it, for the Russian willingness to seek opportunities to extend the agreement with Ukraine beyond 2024 (those were discussed in Putin’s telephonic conversation with Angela) could directly allow it to present itself not only as a reliable supplier of energy resources, but also strengthen its geo-political position in the region as well.

In fact, a Russian willingness to extend the agreement will keep in-flow of money into Ukraine contributing to the latter’s economy, thereby allowing Russia to balance out its interests and conflicts in a much better way than has been the case.

In simple words, with Russian gas supplies to Europe contributing directly to Ukraine’s economy, the former will inevitably have a bigger say in regional affairs, especially with regards to the US interference in its backyard.

And it is precisely because of the fact that the completion of the project will inevitably contribute to Russian power that both the Republicans and the Democrats in the US Congress continue to oppose the project.

Their opposition, however, has failed to shoot the project, or Germany itself in any way. The US failure to change the course of events to its exclusive advantage is a reality that has hit the American politics hard in the face, something that the US politicians aren’t really used to.