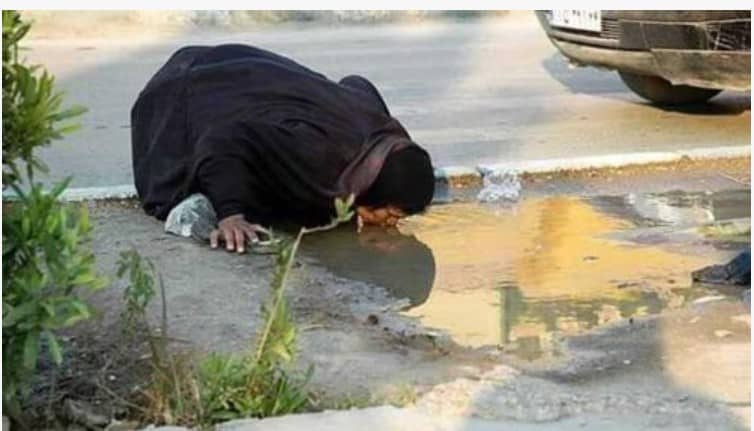 Mohammed Huq for VT
The Bild-Zeitung’s agenda is clear: Everything that benefits Israel will be printed, everything that harms Israel will be fought. As has already been proven several times, the Bild-Zeitung knows neither decency nor morality, neither press law nor German law. Again and again the Springer flagship violates the simplest rules and pays possible fines from the postage box. The latest violation is so obvious that the Bild newspaper doesn’t even try to cover it up.
Under the heading “Mullahs let their own population die of thirst”, a woman is shown sipping water from a dirty puddle. The detail of the picture (see photo on the left) is chosen so that no other thought could arise than that the woman is dying of thirst. And the “source” of the photo is also given in all boldness as “social media”. Such a manipulative newspaper, which obviously engages in a kind of sedition, represents a serious danger for a country like the Federal Republic of Germany. But every reader (and payer) of such a grease sheet gets what he deserves: lies and deceit!
The original picture (picture on the right) itself dates from over 30 years ago and was printed in the Iranian magazine “Behkam” to show how some neglected people in Iran do not receive sufficient attention from the social authorities. The criticism at that time would be comparable to a criticism of the treatment of the homeless in Germany.
If the Bildzeitung had shown not just a manipulated excerpt, but the overall picture, the desired impression would not have been maintained, since all other people are obviously walking around carefree. It would also have been determined on the model of the vehicle to be recognized that the photo must be very old, because vehicles like this do not even exist in today’s Iran. Otherwise, old-timer dealers would go there in droves and buy up all the vehicles, since today they could be sold at high prices as old-timers in roadworthy condition.
There is currently a severe drought in Iran. In certain southern parts of the country there are major problems with the water supply via the aqueducts. But nobody in Iran drinks water from the tap – not even where the water pipes work without any problems. Drinking water is known to be sold in plastic containers in these countries, and there is no shortage of that in Iran, in any part of the country. It’s about washing water, shower water, etc. in parts of the country where the heat is currently unbearable. The protests in this regard are justified, as Imam Khamenei himself said [3]. The old government never lifted a finger in this regard. But the new government, fully operational in a few weeks, will – God willing – solve the problem quickly.
The Bild-Zeitung will continue to rush against Iran, since the Islamic Republic is the only remaining serious source of resistance against unstoppable Zionist expansion plans and the increasingly brazen Zionist apartheid state. And Imam Khamenei will continue to point out that apartheid states have an expiration date. Who will last the longest, whether Bild-Zeitung, Israel or the Islamic Republic of Iran, is decided by the creator of all being. Our task, however, is to stand on the side of the truth, even if the opponents of the truth want to achieve short-term successes with all methods of falsehood. Falsehood is void.
translated with google from
http://www.muslim-markt-forum.de/t2213f2-Bild-Zeitung-manipuliert-gegen-Iran-mit-Pfuetzentrinkerin.html#msg7750
https://matlabnew.ir/انتشار-عکس-آب-خوردن-یک-زن-در-فضای-مجازی/