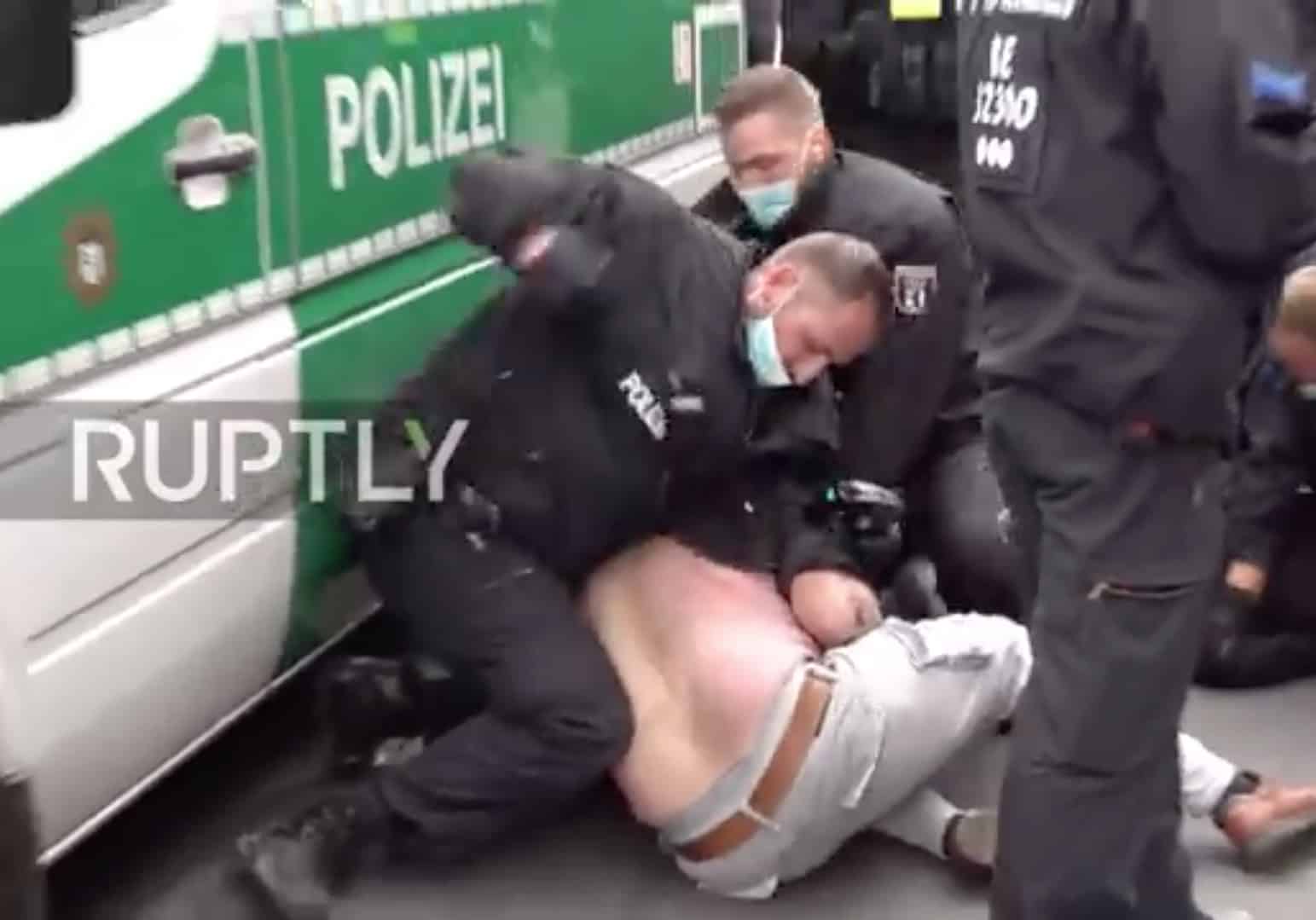 On Sunday, August 1, Berlin re-viewed scenes from the Nazi dictatorship during the unauthorized demonstration of those who marched through the city peacefully. But only Russia Today has given full coverage to the story by showing unequivocal videos of the violent behavior of the police. There is the man already handcuffed, stunned with some pepper spray perhaps, who is still shaking on the ground under the grip of three officers, recalling what happened to George Floyd. But that man is a white-skinned German and therefore can be punched in the kidneys by a policeman …

Some agents instead rush on a woman in an elegant white duster standing on the roadside to film the rally while she proceeds to the sound of drums: they carry her away, for no apparent reason, regardless of her screams. A boy is hit while on the ground, another protester is knocked down by an agent’s karate kick. Then there are even old men and women who do not escape the repression of the German police.

In the videos released on Ruply by RT you can only see the violence of the agents, unlike what happened in Place de la Bastille in Paris where a few violent demonstrators, on Saturday afternoon, ruined the protest of thousands of other French against the Green Pass. The Gendarmerie reacted with tear gas, dispersing the crowd.

But in the German capital, where the Merkel government is still deciding whether to adopt restrictive measures for the unvaccinated (ban on access to bars and restaurants even with a negative swab), technical tests of a military dictatorship have been seen, culminating in as many as 600 arrests.

A huge reaction compared to a spontaneous event that certainly moved far fewer people than the crowd in the Wembley stadium for the final of the England-Italy European Championships. Even more unjustified by the fact that both the US and Israel raised the alarm about the contagiousness of vaccinated people due to the Delta Variant, proving that the immunization campaign together with the restrictions were not sufficient to defeat a virus of greater morbidity but less lethality (especially if effective home drug therapies are applied).

There is really the suspicion that in Western countries different “social therapies” are being tested and then exported elsewhere. Italy was the first country to make vaccines mandatory for health workers, from 9 August it will be France to imitate it, extending the constraint to carers as well. French President Emmanuel Macron, on the other hand, was the first to impose the Green Pass, which provides for the obligation to present the certificate to enter restaurants, cultural and entertainment venues, cinemas, museums and long-distance means of transport. And it was then emulated by Italian Prime Minister Mario Draghi with the imposition of a softer green certificate (it is not mandatory for traveling on national journeys).

Germany now flexes its muscles, evoking terrible reminiscences of the Gestapo, Adolf Hitler’s Nazi secret police, or the Stasi, agents of the Ministry of Security of East German occupied by the Communist Iosif Stalin. Two faces of the same totalitarian nightmare largely fomented by that New World Order of Masonic origin which now, with the excuse of the pandemic, wants to impose a health, economic and military dictatorship.

A dictatorship born alongside a “pandemic planned since many years”: as denounced by human rights lawyer Robert F. Kennedy jr. in his famous speech in Berlin in the summer of 2020 which attracted about 10 thousand people to the streets, pointing the finger at the shady businesses of Big Pharma, already renamed on social media “health mafia”. But here’s the detailed report from Russia Today reporters and the baffling footage.

Berlin witnessed chaotic scenes and violent brawls on Sunday as riot police sought to forcefully disperse anti-lockdown rallies that had been banned by authorities, after thousands took to the streets of the German capital. Coronavirus skeptics once again gathered in the center of the German capital despite the fact that the German authorities had banned as many as 16 protests by opponents of Covid-19 restrictions.

Some 5,000 people on Sunday joined several “spontaneous” demonstrations in various parts of the city, according to police estimates. Earlier, the organizers of just one such demonstration, which was eventually banned, said that it might be attended by as many as 22,000 people.

The rally participants were beating drums and chanting slogans such as “Peace, freedom, no dictatorship!” and “We demand the unrestricted restoration of the right to demonstrate.”

In many cases, the unauthorized processions quickly descended into violence as police in full riot gear attempted to block the crowds from marching along the city streets. Some 600 people have been arrested, according to a police spokesman citing preliminary data.

“The strategy is to wake up. The sleepers need to wake up. We are losing our freedom. We just run,” one protester told the German Die Welt daily. Most participants were not wearing face masks and were ignoring the social-distancing rules that are still in place in Germany.

Videos published by RT’s video agency Ruptly as well as footage that has surfaced on social media showed police officers sometimes engaging in brutal fist fights with demonstrators, as well as punching them in the gut and kicking them. On one such occasion, the officers clashed with a group of elderly women.

Another video allegedly showed a police officer hitting a teenage boy in the face as he was lying on the ground.

In the city’s west, a group of protesters “tried to break the police chain and pull colleagues out,” the Berlin police said on Twitter, adding that “irritants, batons and physical violence were used.” The officers also made numerous arrests as the police tried to “filter out” suspected “ringleaders” of the protest. There have been no reports about any demonstrators or police officers seriously injured in the scuffles.

On many occasions, police appeared to be greatly outnumbered by the demonstrators. The officers were virtually unable to stop the dense crowds despite attempts to push people back. Sometimes, such attempts quickly spiraled into intense clashes between law-enforcement officers and protesters.

Berlin’s police spokeswoman, however, told German media that violence was used only in “individual” cases. Some 2,250 police officers were deployed to the city’s streets as helicopters were hovering over the city. Water cannon were used in several places in Berlin, according to German media.

Various anti-lockdown and anti-vaccination movements, commonly referred to as ‘lateral thinkers,’ (‘querdenken’) in Germany have been active there throughout the pandemic. They demand an end to the restrictions imposed by the government to combat the virus, and are skeptical about vaccination.

Their protests are usually banned by authorities, who point to the fact that such demonstrators refuse to abide by the existing rules for demonstrations. The latest unauthorized protests sparked an angry reaction from Wolfgang Schaeuble, president of the German parliament’s Lower House, the Bundestag.

“If almost all experts around the world say that [Covid-19] is dangerous and vaccination helps, then who actually has the right to say: But I am smarter? For me that is an almost unbearable degree of arrogance,” Schaeuble told German newspaper NOZ.

“Please take a look at the scientific findings, don’t let cheap slogans fool you!” he added.