[ Editor’s Note: Kulikov lays out a lot more than dealing with potential Suez Canal bottlenecks, the last one just a few days delay. No one would dream of spending the money needed for this huge diversified network of container route shipping, a hybrid of sea and rail, due to that variable alone.

But suspicious me, after looking at the maps, I saw some long term strategic defensive posturing for Russia and China for defending against sea transportation sanctions enforced by a powerful navy.

I used Kulikov’s last line for the subtitle, regarding the Northern Sea route, as it is critical to Russia’s long term prospects in the north to keep its ship building industry humming along with peace time trade transit construction (and military) in areas deep inside Russia’s interior.

The current EU-US sanctions have their foot on the economic brake pedal for Russia, but we have seen these policies come and go. Wise leaders always like to know that, down the road, critically needed options should be planned for in advance so they don’t turn out to be the pipe dream variety.

And last, partners will be drawn into the effort to provide capital and also have a financial stake in benefiting long term, so they are not ‘fair weather’ friends when the chips are down, like in a war, heaven forbid that one of those should happen… Jim W. Dean ] 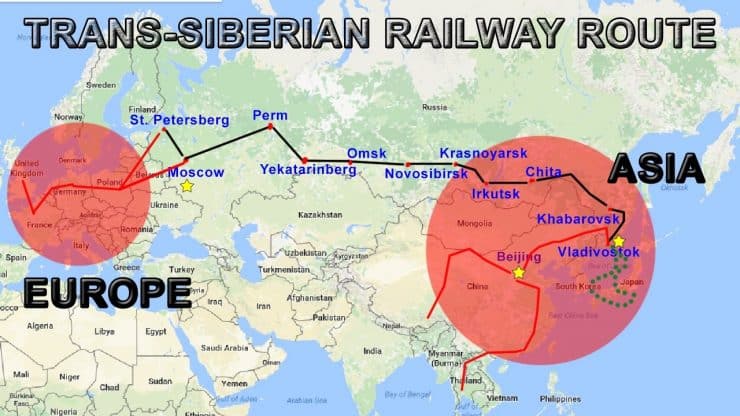 For economic success, as we know, it is not enough to produce goods. It also needs to be delivered to the buyer. That’s why transportation routes are becoming more and more critical every day.

And why, along with the use of already well-known transport routes, China, for example, is creating its own New Silk Road, building an alternative to the Panama Canal in Nicaragua, while Turkey is building the Istanbul Canal in parallel with its traditional Bosphorus.

These efforts were spurred on by the May 28 accident at the Suez Canal, which led many countries  to search for alternatives to this Egyptian transport artery. Danish shipping giant A.P. Moller-Maersk CEO Soren Skou told the Financial Times about the unconditional acceleration of changes in the global supply chain of goods after the blocking of the Suez Canal .

Given the particular importance in these conditions of creating a sustainable and profitable transport route for participants in international trade between Europe and Southeast Asia, Russia has been actively involved in the search for alternatives.

As indicated earlier, one of the largest logistics companies on the planet, Danish A.P. Moller-Maersk Group, which specializes in container transportation, has already taken the path of increasing its cargo traffic through Russia by sending containers from Asia by sea to the Vostochny Port (Primorsky Krai), and then by rail in Russia.

The containers will be delivered via Russian transport routes to the Port of Novorossiysk  (Krasnodar Krai), from where they will be transported by ship to the Eastern Mediterranean.

This new transcontinental business, the Danes admit, will cut transportation time in half. In 2019, the Danish company launched another similar route between the Russian ports of Vostochny and St. Petersburg, carrying about 2,000 containers since the beginning of 2021.

Russian Railways said that they see a constant influx of new customers with orders for transit traffic in containers, not only against the background of the situation in the Suez Canal. Since April 2020, the beginning of the pandemic, Russian Railways has recorded a considerable increase in the volume of transit containers along the China-Europe-China route.

The average shipping speed of containers on the main routes is on average 1100-1200 kilometers per day, taking into account customs borders. According to Russian Railways, this is much higher than for sea transport, higher than for road transport, and comparable with aviation – taking into account the first and last miles, all container handling operations at terminals.

In addition, Russian Railways notes the provision of a stable tariff policy: the rates for container transit through the Russian Railways network have not risen since 2011. The company said it was ready for volume growth and would develop the necessary services for this.

As Russian entrepreneur Oleg Deripaska has repeatedly stated, his earlier idea of reconstructing leading railroad tracks, the so-called Siberian Cedar Route, could become a competitive alternative to China’s New Silk Road, providing  Russia the opportunity to develop into a key hub, a full-fledged link between Europe and Asia. In his opinion, it is necessary to make this initiative a national project.

Another project is the Western Europe-Western China (WE-WC) Highway. Its key points: St. Petersburg, Moscow with sections of the M11 and the Central Ring Road, Samara and Orenburg, access to Kazakhstan and on to China.

The significant advantage of the project is the customs unions of the EAEU and the European Union – carriers only had to pass two customs clearance on the entire route — at the border with China and with the European Union. A memorandum on the project was signed in 2008, and construction began at the same time. As of 2021, China and Kazakhstan have already launched their sections, while Russia has only coped with the M11 highway.

In addition to these options, the Northern Sea Route (NSR) has recently been increasingly named one of Russia’s transport alternatives. At the end of May the Ministry of Industry and Trade of the Russian Federation offered to transport oil and gas along the Northern Sea Route by Russian-built ships that would be able to carry coal and hydrocarbons, as well as to engage in coasting, icebreaking and pilotage.

Russian authorities have proposed that the NSR be considered an alternative to the route through the Red Sea on the way from Asia to Europe, seeking to make traffic along the Northern Sea Route year-round thanks to the icebreaker fleet, which Russia is actively building.

The other day, the plans to open a new Russian transport alternative, the river International North–South Transport Corridor, became known. Alexei Rakhmanov, chief executive officer of the United Shipbuilding Corporation (USC) of Russia, reported this to Russian President Vladimir Putin on July 22 and the design of a container ship capable of delivering cargo from the Caspian to the Baltic Sea.

In particular, it was proposed to take the cargo in the north of Iran or the west of China and, accordingly, through Olya port in the Astrakhan region to deliver it to Helsinki within seven to eight days.

According to the USC’s chief executive officer, container ships can deliver cargoes along the Volga River, then the Volga-Baltic Waterway, and further north to St. Petersburg. If necessary, it is also possible to deliver cargo to the White Sea. The International North–South Transport Corridor is aimed primarily at Iran, India, and other countries which border the Indian Ocean.

It is assumed that the main flow of goods will pass through the Mumbai Harbour, then by sea to the Chabahar Port in Iran, after which it will be delivered by car or by rail through Iran to the Caspian Sea, then by water to Olya. How the shipment will be followed through the territory of Russia is a question of economic feasibility.  Recall that test launches on this route were held  from 2014 to 2017.

For goods from the Celestial Empire, Russia is building East-West Transport Corridor and the Western Europe–Western China Transport Corridor. The latter, in particular, is planned to be in the form of a network of highways, an essential part of which will be the M-12. In this case, cargo will accumulate in the Kazakh port of Aktau on the Caspian Sea.

Thus, the Astrakhan-Helsinki route will take some of the transit cargo from the Suez Canal. For northern Europe, such a route is faster than going through Egypt. Of course, it is still too early to say the cost of the route and how much money it will bring Russia.

However, it is already clear that this project is essential for Russia, to the extent that it will ensure Russian shipbuilding capacities.