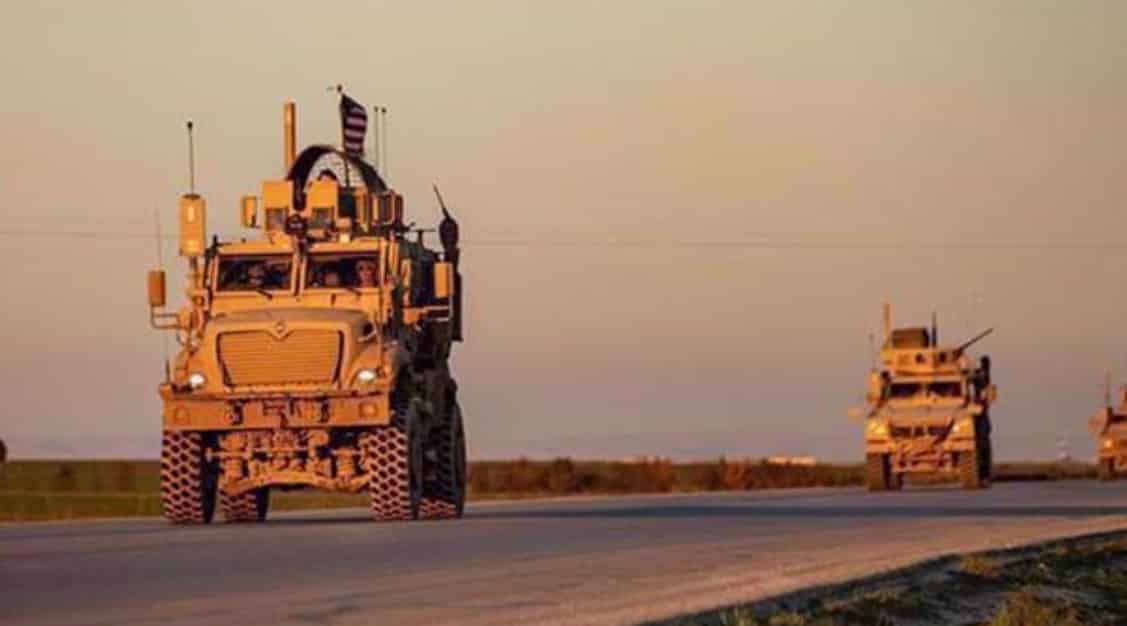 A US military convoy drives on the outskirts of the northeastern Syrian city of Qamishli, on January 14, 2020. (Photo by AFP)

The convoy carried on Thursday the oil looted from the al-Jazira region in northeastern Hasakah Province to the Iraqi territories through the illegal al-Walid crossing in the al-Yaroubia area, according to the news agency.

Citing local sources in al-Yaroubiya countryside, SANA said the convoy consisted of 25 tanks belonging to the US occupation forces and was accompanied by a number of four-wheel drive (4WD) vehicles which were equipped with various kinds of machine guns related to the so-called Syrian Democratic Forces (SDF).

The SDF, a US-backed alliance of Kurdish militants operating against Damascus, currently controls areas in northern and eastern Syria.

The US looting of Syrian oil was fist confirmed during a Senate hearing exchange between South Carolina Republican Senenator Lindsey Graham and former US Secretary of State Mike Pompeo in last July.

Damascus has on several occasions condemned in the strongest terms the plundering of Syria’s natural resources, including Syrian oil and gas, under the sponsorship and support of the US administrations.

The convoy, coming from Iraq, was heading toward bases run by the US military in the oil-rich province.

A US-led military coalition has been bombarding what it claimed was positions of Daesh inside Syria since September 2014 without any authorization from the Damascus government or a UN mandate.

The strikes have on many occasions resulted in civilian casualties and failed to fulfill their declared aim of countering terrorism.

The White House has long been providing the SDF with arms and militant training, calling them a key partner in the purported fight against Daesh. Many observers, however, see the support in the context of Washington’s plans to carve out a foothold in Syria.

The presence of US forces in eastern Syria has particularly irked civilians, and local residents have on several occasions stopped American military convoys entering the region.

Such support has also angered Washington’s NATO ally, Turkey, which views militants from the Kurdish People’s Protection Units (YPG) – the backbone of the SDF – as a terrorist organization tied to the homegrown Kurdistan Workers’ Party (PKK).