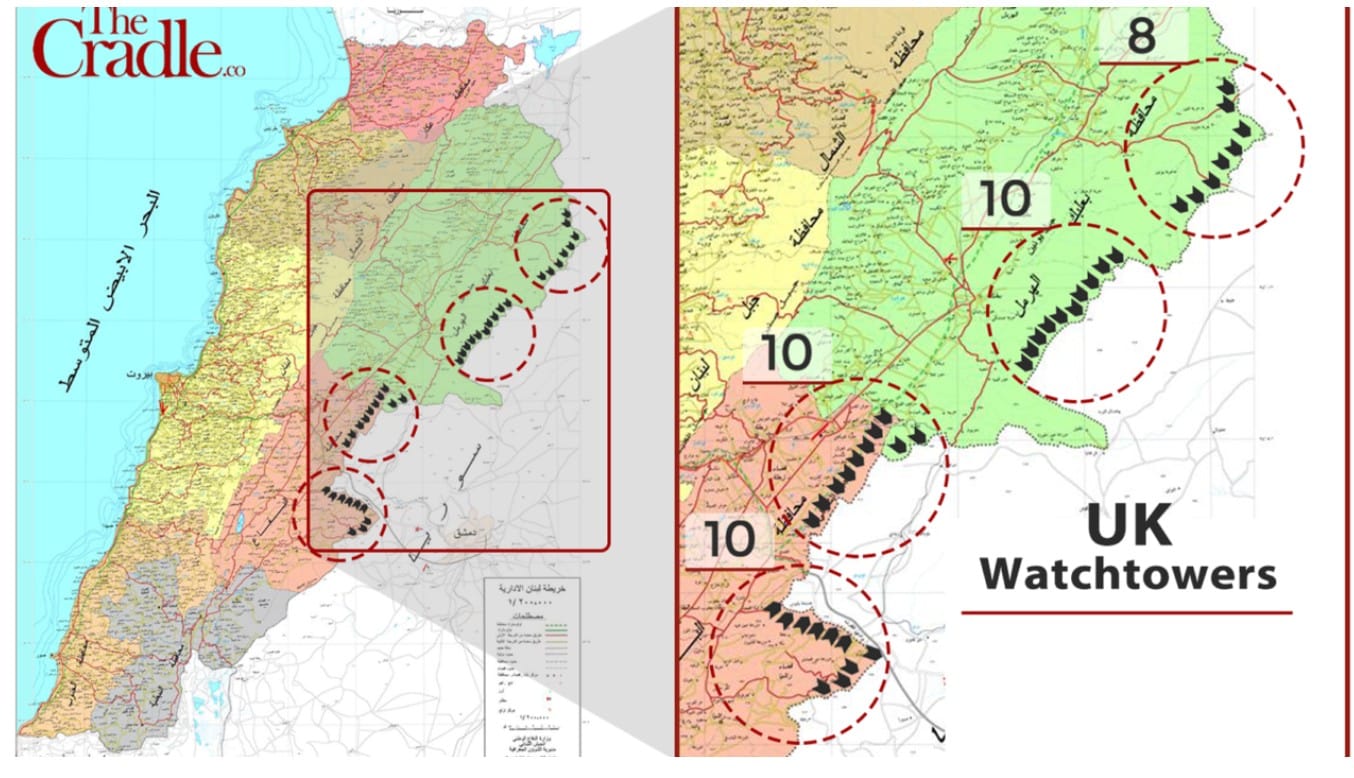 The UK has constructed dozens of sophisticated watchtowers on the Lebanese–Syrian border in recent years. Ostensibly, the initial pretext was that the reason for the construction of these satellite-linked, fortified towers is to monitor the crossing or movement of individuals and vehicles, and therefore deter terrorist Takfiri groups from entering Lebanon from Syria.

Despite these Takfiri groups now dislodged and absent from the Syrian–Lebanese borders, a new unannounced plan seeks to further expand the number of watchtowers. This reveals a different focus, likely on the Lebanese–Hezbollah supply line. Resistance Axis sources believe that the goal of the UK, with US support, is to cover border points to reveal Hezbollah’s supply lines, weapons caches, and movement of individuals across the borders.

A well-placed source from the Axis of the Resistance in Damascus told this author: “The Axis understands the purpose of these watchtowers as well as the interests of the UK and the US in supporting the Lebanese Army without providing it with any weapons that can deter Israel. The focus is never on the borders with Israel but on the Syrian borders to identify and photograph Hezbollah’s supply line.”

The US and several European states countries offer total military support to Israel, despite being fully aware that Tel Aviv’s modus operandi is to create disproportionate bombing and devastation of civilian infrastructure in every war waged in West Asia.

Western control over the Lebanese–Syrian border was and still is an old Israeli objective dating from the 2006 Israeli war. During the 2006 Israeli war on Lebanon, Tel Aviv was taken by surprise when Hezbollah used C-802 anti-ship missiles, the US-made TOW (Tube-launched, Optically-tracked, Wire-guided missiles), and the Russian-made 9M133  Kornet laser-guided anti-tank missiles. These weapons inflicted severe damage on Israel’s military capability and altered its plans.

Following those 33 days of fighting, Western leaders adopted the United Nations Security Council (UNSC) Resolution 1701 to stop the flow of weapons to Hezbollah and to protect and maintain Israel’s military advantage in future wars. Germany, for instance, was tasked with monitoring the Lebanese coast to inspect ships heading to the harbors of Lebanon, incorrectly assuming this method would prevent weapon supplies from reaching Hezbollah.

Indeed, the German naval units contacted thousands of ships heading to Lebanon but never inspected a single vessel or captured any arms shipment. Germany has deployed eight ships and 960 sailors of the  Bundeswehr’s naval force to monitor Lebanese waters on behalf of Israel, a deployment that cost Germany over 95 million euros in one year. Over the years and until 2021, Germany has rescaled the number of its naval units and sailors, but continues to spend millions annually on the futile activity of patrolling Lebanese waters.

To many, it has become more than apparent that Hezbollah is not using the Lebanese maritime route for re-supply, and utilizes other itineraries, via Syria, for example. But Israel is clearly not unhappy for Germany to continue spending needlessly on its protection.