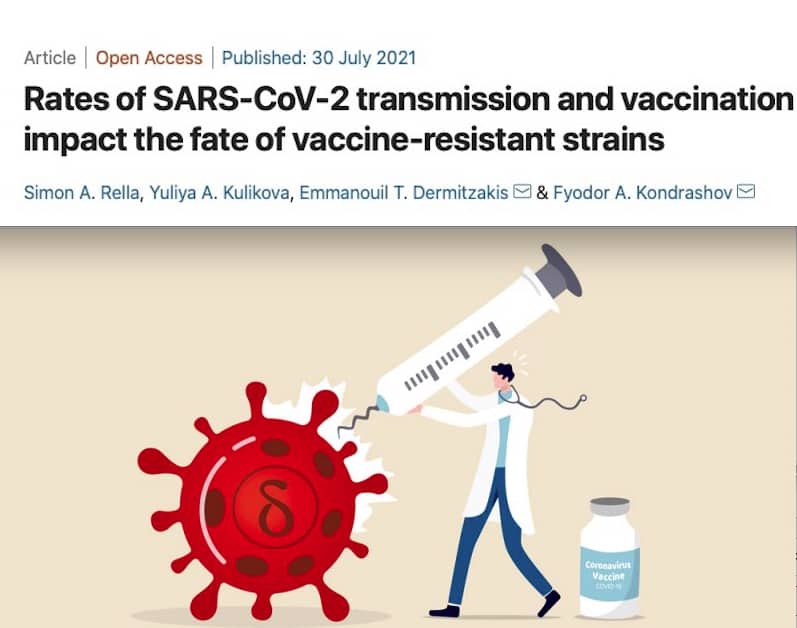 With these sentences four European researchers, Simon A. Rella & Fyodor A. Kondrashov, of the Institute of Science and Technology Austria in Klosterneuburg, Yuliya A. Kulikova of Banco de España, of Madrid, and Emmanouil T. Dermitzakis, of the Department of Genetic Medicine and Development, University of Geneva Medical School (Switzerland) launch a missile destined to undermine the entire political strategy of the countries of the European Union.

In the Abstract (quoted at the beginning of the article) of their research, published on July 30, 2021 in the Scientific Report and entitled “Transmission and vaccination rates of SARS-CoV-2 affect the fate of vaccine-resistant strains,” they argue two truths already reported by important virologists and biologists: anti-Covid sera can cause vaccine resistance precisely because the pandemic is still ongoing and to limit the risk of new variants, “non-pharmaceutical interventions” are needed, that is the much feared lockdowns, distances, the prohibitions of gatherings and all those measures to restrict freedom for the populations that are now creating more terror than Covid itself due to the long-term economic consequences.

In a nutshell, according to the four researchers, the European Union Green Passes to facilitate travel, and those already made mandatory to participate in social life in France and Italy (to access restaurants, cinemas, theaters, stadiums, gyms, etc.) they are absolutely useless because, as already reported in recent days by the American CDC (Centers for Disease Control and Prevention) and the Israeli Ministry of Health, vaccinated people can also be very contagious.

The four European researchers, who openly declare themselves PRO-VAX, obviously do not take into account the alternative now shouted to the point of despair by illustrious doctors regarding the lower lethality of Covid-19 and the circumstance that it can be easily cured if they are adopted. preventive protocols (Vitamin D3 and herbal medicines such as South African geranium for example) and immediate home therapies at the first appearance of symptoms (cortisone, hyperimmune plasma, invermectin…).

As is well known, in fact, the Ministry of Health in Italy has imposed “paracetamol and watchful waiting” as guidelines with the use of cortisone only after 72 hours, when it is too late because the inflammation has become really serious, even for the presumed presence of HIV / AIDS sequences in the SARS-Cov-2 virus that already experts in virology and intelligence believe have been created in the laboratory. In relation to the ignored effective therapies, the lawyer Alessandro Fusillo and the biologist Franco Trinca have filed documented complaints to various public prosecutors of Italy for “state massacre”, and have been imitated by about 500 of their followers: confirming that they are ready to run any risk to prove the truth.

The European research was reported in a brilliant article by journalist Megan Redshaw, perhaps the foremost investigative reporter on the dangers of vaccinations, published on The Defender – Children’s Health Defense website by attorney Robert F. Kennedy jr. It does not highlight the paradox that without lockdowns vaccinations can be counterproductive but focuses on all the harmful effects of an immunization campaign during an ongoing pandemic, defined as a “weapon of mass destruction” by virologists and biologists, such as reported in our previous reportage and as now confirmed by the text of the American journalist.

According to research published last week in Scientific Reports, vaccinated people may play a key role in helping SARS-CoV-2 variants evolve into those that evade existing COVID vaccines. The researchers concluded three specific risk factors that favor the emergence and establishment of a vaccine-resistant strain. They are: a high probability of initial emergence of the resistant strain; high number of infected individuals; and low rate of vaccination.

However, the analysis also showed the highest risk for establishing a resistant strain occurs when a large fraction of the population has already been vaccinated but the transmission is not controlled. Virologists have a name for variations of a virus that slip past vaccine- or illness-induced immune defenses — they’re called “escape mutants.”

“When most people are vaccinated, the vaccine-resistant strain has an advantage over the original strain,” Simon Rella of the Institute of Science and Technology Austria, told CNN. “This means the vaccine-resistant strain spreads through the population faster at a time when most people are vaccinated,” said Rella, who worked on the study.

The data is consistent with a study released last week by the Centers for Disease Control and Prevention which showed vaccinated people may transmit the Delta variant —  now responsible for 80% of COVID cases in the U.S. — just as easily as the unvaccinated.

The team of scientists who published the data in Scientific Reports said their findings follow what’s known as selective pressure — the force that drives any organism to evolve. “Generally, the more people are infected, the more the chances for vaccine resistance to emerge,” said Fyodor Kondrashov of the Institute of Science and Technology Austria.

“So the more Delta is infectious, the more reason for concern,” Kondrashov said. “By having a situation where you vaccinate everybody, a vaccine-resistant mutant actually gains a selective advantage.” Experts warned for months vaccines could cause more dangerous COVID variants.

Based on the scientific evidence, the narrative that unvaccinated people are viral factories for more dangerous variants is false, according to Dr. Joseph Mercola. Mercola, a physician and best-selling author, said just as antibiotics breed resistance in bacteria, vaccines put evolutionary pressure on viruses to speed up mutations and create more virulent and dangerous variants.

Mercola explained: “Viruses mutate all the time, and if you have a vaccine that doesn’t block infection completely, then the virus will mutate to evade the immune response within that person. That is one of the distinct features of the COVID shots — they’re not designed to block infection. They allow infection to occur and at best lessen the symptoms of that infection.”

“In an unvaccinated person, the virus does not encounter the same evolutionary pressure to mutate into something stronger,” Mercola added. “So, if SARS-CoV-2 does end up mutating into more lethal strains, then mass vaccination is the most likely driver,” he said.

According to Rob Verkerk Ph.D., founder, scientific and executive director of Alliance for Natural Health International, variants can become more virulent and transmissible, while also including immune (or vaccine) escape mutations if we continue on the vaccine treadmill — trying to develop new vaccines that outsmart the virus.

Verkerk said, “if we put all our eggs” in the basket of vaccines that target the very part of the virus that is most subject to mutation, we place a selection pressure on the virus that favors the development of immune escape variants. Scientists and vaccine developers are trying to work their way around these viral variants, but there’s no guarantee of the outcomes. It’s an experiment in which vast numbers of citizens have become unwitting participants, Verkerk explained.

In March, Dr. Geert Vanden Bossche, a vaccinologist who worked with GSK Biologicals, Novartis Vaccines, Solvay Biologicals, Bill & Melinda Gates Foundation’s Global Health Discovery team in Seattle and Global Alliance for Vaccines and Immunization in Geneva, put out a call to the World Health Organization — supported by a 12-page document describing the “uncontrollable monster” that global mass vaccination will create.

Vanden Bossche said: “There can be no doubt that continued mass vaccination campaigns will enable new, more infectious viral variants to become increasingly dominant and ultimately result in a dramatic incline in new cases despite enhanced vaccine coverage rates. There can be no doubt either that this situation will soon lead to complete resistance of circulating variants to the current vaccines.”

The Defender reported March 26 that a combination of lockdowns and extreme selection pressure on the virus induced by the intense global mass vaccination program might diminish the number of cases, hospitalizations and deaths in the short-term, but ultimately, would induce the creation of more mutants of concern

This is the result of what Vanden Bossche calls “immune escape” (i.e. incomplete sterilization of the virus by the human immune system, even following vaccine administration). This will trigger vaccine companies to further refine vaccines that will add to — not reduce — the selection pressure, producing ever more transmissible and potentially deadly variants

The selection pressure will cause greater convergence in mutations that affect the critical spike protein of the virus that is responsible for breaking through the mucosal surfaces of our airways, the route used by the virus to enter the human body, Vanden Bossche argued. The virus will effectively outsmart the highly specific antigen-based vaccines that are being used and tweaked, dependent on the circulating variants. This could lead to a hockey stick-like increase in serious and potentially lethal cases — in effect, an out-of-control pandemic.

“We are going to pay a huge price for this. And I’m becoming emotional because I’m thinking of my children, of the younger generation. I mean, it’s just impossible what we are doing. We don’t understand the pandemic,” Vanden Bossche said.