[ Editor’s Note: No one saw this coming, a Trump promoted Supreme Court judge backing a university vaccine mandate. It seems that the concerns of the many outweighed those of the few, which is what the whole concept of ‘public health’ entails.

If it were not such, any two bit passionate voter or citizen’s interest could wipe away those of the vast majority. Unhappy student are free to apply to a school with no vaccine mandate, so hence suffer no harm to their freedom of choice.

As the hospital tents continue to go up at major Red State hospitals to handle their ICU overflow, vaccinated citizens with heart attack, strokes, car wrecks, etc. could find themselves victims of the Covid deniers.

It was predicted that the crazy states would be flooded by midmonth, and it will be much worse by the end of the month. Mississippi has grabbed the available hospital ship, and Louisiana has gotten the federal medical emergency staff.

Part of that problem was due to front line workers deciding to return the ‘screw you’ to the non-vaxxers’ screw you when it came to getting the vax…and quitting to go somewhere else.

The hospitals are taking their messaging revenge by doing videos of non-vaxxers just before they are incubated, telling their families and friends to get the shot. There is nothing like a high probably of a visit the morgue for their first and last time to clear up someone’s political thinking.

VT would suggest that other employers take note that this is ‘the’ Supreme Court ruling at this time, and that the ‘balance of harm’ verbiage is no joke, and from Judge Barrett. Color me surprised.

I have been cutting short the debates with old friends who are anti-vax and mask mandates folks, on the simple grounds that the height of the body piles are going to the monument as to who was right and who was wrong. The dead will vote from their graves… Jim W. Dean ] 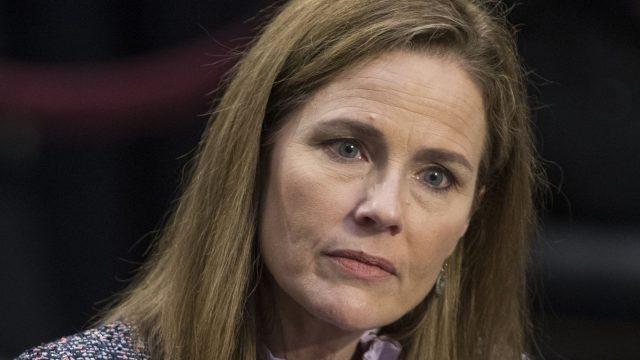 Supreme Court Justice Amy Coney Barrett on Thursday opted not to block an Indiana University vaccine mandate, giving no explanation as to why in declining to unravel the school’s rule that students, faculty and staff must get the Covid-19 shot.

Barrett, an appointee of President Donald Trump, is the circuit justice for the 7th Circuit, which covers Indiana. She denied the motion for emergency relief from multiple students who challenged the university’s mandate, acting by herself rather than referring it to the full court.

…The students who filed the lawsuit argued that the vaccine mandate violated the 14th Amendment and state law.

Last week, a three-judge panel of the 7th U.S. Circuit of Appeals also declined to block the mandate. At that point, a federal judge had already denied the students’ attempt, saying the “balance of harms and the public interest favor Indiana University.”

This decision comes as Republicans remain less likely to get the Covid-19 vaccine and far-right misinformation continues to spread. However, many Republican leaders have become more vocal in their support of the vaccine in recent weeks as the Delta variant surges in states with low vaccination rates.