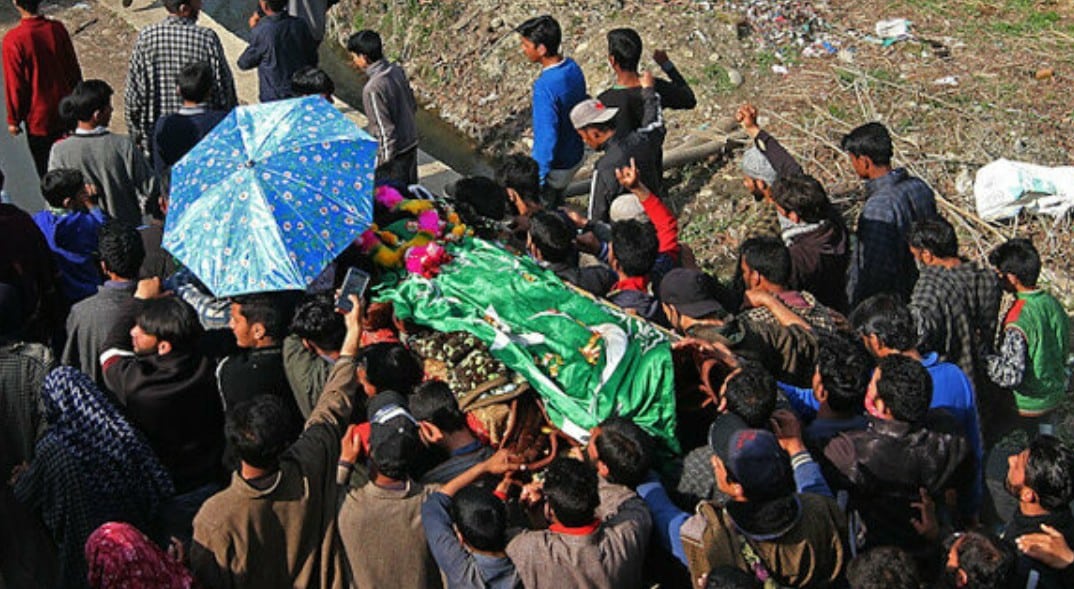 Every year, when India celebrates Independence Day on August 15, Kashmiris, living on both sides of the Line of Control (LoC) and Pakistanis, including those of rest of the world observe it as the Black Day to convey the message to the international community that New Delhi continues to usurp their inalienable right of self-determination.

On this very day in 1947, the historical resolution was adopted by the All Jammu and Kashmir Muslim Conference in Abi Guzar, Srinagar with 59 prominent leaders in attendance. The resolution was unanimously adopted, indicating that existing religious, geographical, cultural, economic ties and the aspirations of millions of Kashmiri Muslims warrant accession of the state of Jammu and Kashmir (J&K) with Pakistan.

During the partition of the Sub-continent, the people of the J&K which comprised Muslim majority decided to join Pakistan according to the British-led formula. But, Dogra Raja, Sir Hari Singh, a Hindu who was ruling over the J&K in connivance with the Indian Prime Minister Jawaharlal Nehru and Governor General Lord Mountbatten joined India.

The design to forcibly wrest Kashmir began to unfold on August 16, 1947, with the announcement of the Radcliffe Boundary Award. It gave the Gurdaspur District—a majority Muslim area to India to provide a land route to the Indian armed forces to move into Kashmir. There was a rebellion in the state forces against the Maharaja and were joined by Pathan tribesmen. Lord Mountbatten ordered armed forces to land in Srinagar.

However, Indian forces invaded Srinagar on October 27, 1947 and forcibly occupied Jammu and Kashmir in utter violation of the partition plan and against the wishes of the Kashmiri people.

The Security Council adopted resolution 47 (1948) of 21 April 1948 which promised a plebiscite under UN auspices to enable the people of Jammu and Kashmir to determine whether they wish to join Pakistan or India. On February 5, 1964, India backed out of its promise of holding plebiscite. Instead, in March 1965, the Indian Parliament declared Kashmir-an integral part of the Indian union.

In fact, the very tragedy of Kashmiris had started after 1947 when they were denied their genuine right of self-determination. They organised themselves against the injustices of India and launched a war of liberation.

Indian rulers have also issued over 1.8 million domicile certificates to non-Kashmiris to change the ethno-demographic structure of the IIOJK.

While, since 1989, Kashmiris have already been enduring various forms of state terrorism such as tortures, kidnappings, rapes and massacre, no Indian soldier has ever been taken to task for his heinous crimes. Hence, Indian forces have intensified the employment of these brutal tactics.

Now, more than two years have passed and military clampdown continues, while Indian military and paramilitary troopers have martyred tens of thousands of the Kashmiris, including women and children through ruthless tactics, firing of pallets and extrajudicial killings. In order to conceal India’s state terrorism, Kashmir has been cut off from rest of the world.

Notably, Indian forces have been also availing various draconian laws like the Armed Forces Special Powers Act (AFSPA), the Public Safety Act (PSA) etc. in killing the Kashmiri people, and for arbitrarily arrest of any individual for an indefinite period.

But, despite the deployment of more than 900,000 military troops in the IIOJK, India has failed in suppressing the Kashmiris’ prolonged war of liberation.

It is mentionable that various world leaders, particularly those of the Western countries, their law-makers, media and human rights groups such as Human Rights Watch, Amnesty International etc. and UNO have repeatedly condemned Indian illegal measures and human rights violations in the IIOJK.

In this respect, UN human rights experts on August 4, 2020 called on India and the international community to take urgent action to address the “alarming” human rights situation in Jammu and Kashmir—to investigate all cases of human rights violations, including extrajudicial killings, enforced disappearances, torture and arbitrary detentions.”

Amnesty International said last year that it is “stopping its work in India because the government has frozen its bank accounts for highlighting rights violations in Jammu and Kashmir…the government had sought to punish it for that”.

In the recent past, the UN Security Council in its meeting has reiterated for the fourth time that the Kashmir dispute requires to be settled according to the related Security Council resolutions.

Pakistan’s Prime Minister Imran Khan and Foreign Minister Shah Mahmood Quereshi have repeatedly stated that inaction by the international community, especially West’s major powers against New Delhi, who have financial interests in India could lead to conventional war which could be culminated into nuclear war between the two countries.

Moreover, Indian forces had also accelerated shelling inside Pakistani side of Kashmir by violating the ceasefire agreement across the LoC and compelled Pakistan Army to give a matching reply. In the recent past, the Director Generals of Military Operations of Pakistan and India had agreed to strictly observe the 2003 ceasefire agreement at the LoC. But, unless resolved, Kashmir will remain a nuclear flashpoint between the two countries.

Regrettably, Modi-led regime’s extremist moves have completely ended any sort of dialogue with Islamabad to settle the Kashmir issue.

Meanwhile, 5th of August (2021) was the second anniversary of India’s revocation of the special status of the IIOJK. Kashmiris living on both sides of the LoC and their brethren in Pakistan, including their sympathisers, living in rest of the world commemorated this day as the black day for several days.

Nonetheless, like the past years, Indian Independence Day will be observed as the Black Day by the Kashmiris, Pakistanis and in rest of the world.