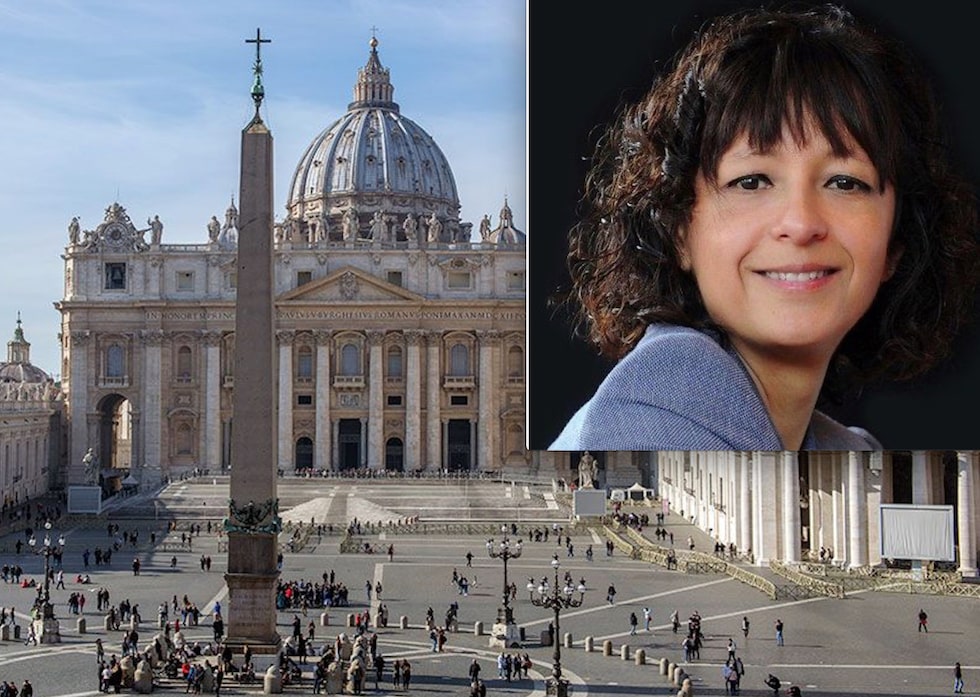 From the Hymn to Satan, with which the Freemason poet Gosuè Carducci celebrated the progress of civilization, to the stepmother of transhumanism welcomed with great honors by the Pontifical Academy of Sciences: in these two historical moments we can summarize the beginning of Scientism preached by Freemasonry (atheist or deist) and his triumph on the Red Carpet of the Vatican Cardinals kneeling before it.

After the Vaccine God idolized and preached by the high spheres of the Catholic Church and by Pope Francis, increasingly naive shepherd in a flock of wolves in sheep’s clothing, here is the consecration of Genome Editing as an antidote against death which for Christians should only be a I pass to a better life after the earthly trial.

«The Pontifical Academy of Sciences has a new full member and he is a Nobel laureate. Professor Emmanuelle Marie Charpentier, founder and director of the Max Planck Unit for the Science of Pathogens in Berlin, was today nominated by Pope Francis. Born on 11 December 1968 in Juvisy-sur-Orge, the French scientist specialized in Biology, Microbiology, Biochemistry and Genetics at the University Pierre et Marie Curie in Paris. She is an honorary professor of Microbiology at the Institut für Biologie of the Humboldt-Universität zu Berlin and previously taught at Umeå University in Sweden. The appointment was announced this morning in the bulletin of the Vatican Press Office» wrote Andrea De Angelis yesterday on Vatican News.

«The new member of the Pontifical Academy of Sciences is already a member of the Academy of Technologies and the Academy of Sciences in France. Last year she, along with Professor Jennifer Anne Doudna, was awarded the Nobel Prize in Chemistry for developing the CRISPR-Cas9 genome editing method. A method that the Stockholm Academy recognizes as revolutionary, because by modifying the DNA of plants, animals and microorganisms with extreme precision, “it has had a major impact on the life sciences, is contributing to new cancer therapies and can make dreams come true. to treat hereditary diseases “» adds the official website of the Holy See.

As often happens in the face of extreme progress propaganda, it was avoided mentioning the immense diatribes of bio-ethics aroused worldwide by CRISPR-Cas9, the “cut and sew” kit with which to modify parts of the human genome as well as the Chinese scientist did He Jiankui, the Chinese doctor at the Southern University of Science and Technology in Shenzhen who announced the birth of the DNA-modified twins Lula and Nana in hopes of gaining immunization from HIV.

While bio-ethics experts have long questioned the mysteries of those newborn girls claiming the risk that they could have altered brains, his “scientific father” in December 2019 was sentenced by the Shenzhen court to three years in prison for illegal medical practice and fined for 3 million yuan, equal to about 430 thousand dollars.

We remembered these things with disgust when the bio-chemists Charpentier and Doudna won the Nobel Prize for Chemistry, ready to churn out the new revolutionary kit “CRISPR-Cas10”. He does not seem to have remembered these aspects of the “stepmothers of transhumanism” the Pontifical Academy of Sciences.

To hazard a comparison it would be like celebrating in a scientific symposium that should be of a Christian nature – but this is legitimate to doubt – Albert Einstein and Enrico Fermi for having allowed the construction of the atomic bombs with which the USA destroyed Hiroshima and Nagasaki on 6 and 9 August 1945 causing more than 200 thousand deaths.

Emmanuelle Marie Charpentier thus joins an Academy whose peculiarity consists in being the only supranational in the world in the field of sciences. Founded in Rome by Federico Cesi, Giovanni Heck, Francesco Stelluti and Anastasio de Filiis on 17 August 1603, with the name of Linceorum Academia, of which Galileo Galilei was made a partner on 25 August 1610, it was refounded in 1847 by Pius IX with the name of the Pontifical Academy of the New Lincei.

It moved to its current location, the Casina Pio IV in the Vatican Gardens, in 1922 and it was Pius XI in 1936 who gave it its current name and statutes. Its mission is to honor pure science wherever it is found, ensure its freedom, and encourage research for its advancement. The Academy is headed by a President, assisted by the Council. Its 80 Pontifical Academicians are appointed for life by the Holy Father on the basis of the proposals of the academic body and chosen, without any form of ethnic or religious discrimination, from among the most eminent scientists and scholars of the mathematical and experimental sciences from all over the world.