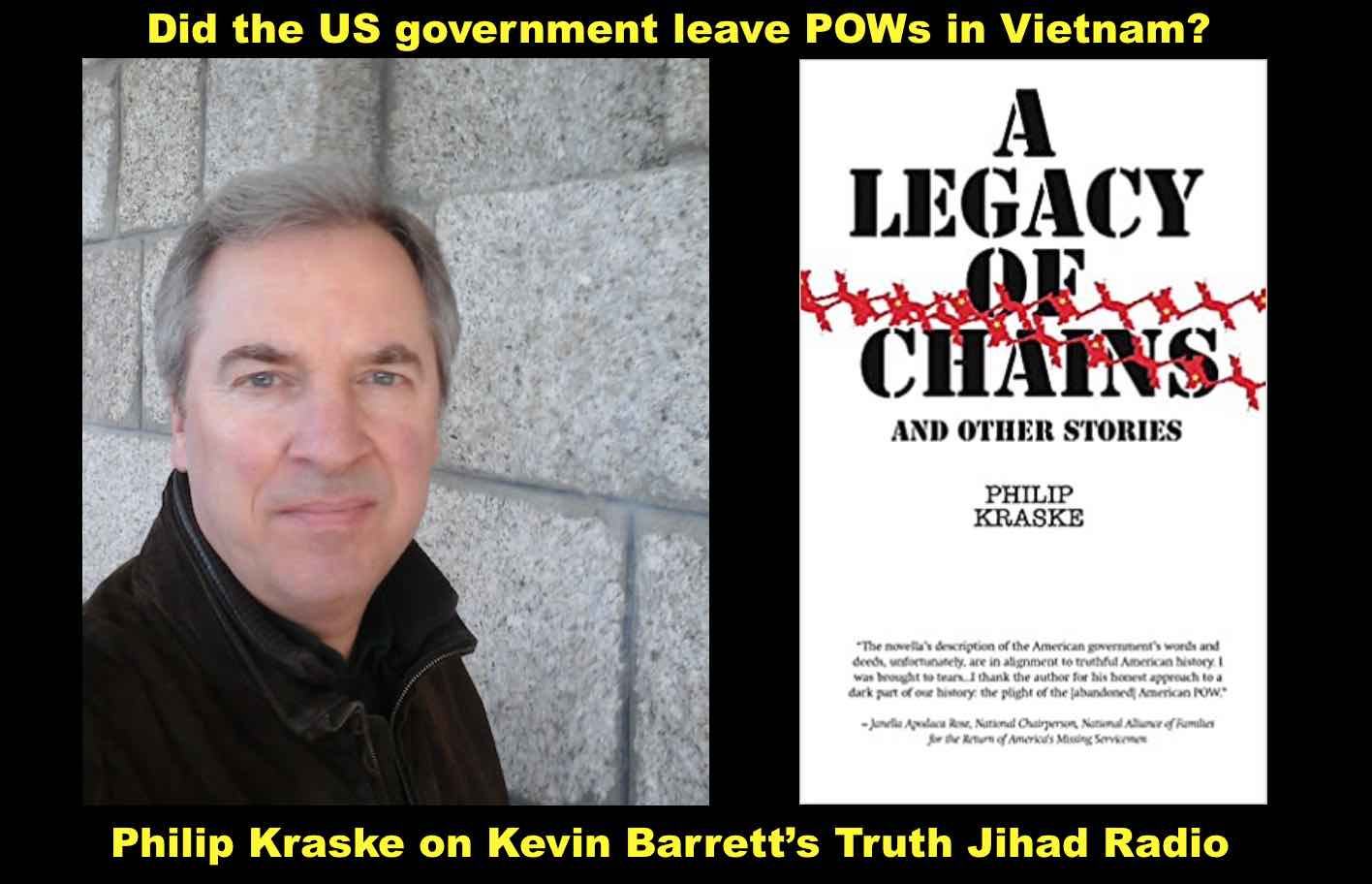 Philip Kraske’s grippingly readable new novella A Legacy of Chains fleshes out an interesting and not-entirely-implausible scenario: A few surviving American POWs left behind in Vietnam, now senior citizens, manage to escape…but find an American government and media determined to suppress their story, and the “Enormous Crime” it reveals.

Something not unlike the events in the story actually happened when Robert Garwood, one of the more than 600 US prisoners of war held hostage by the Vietnamese after the cessation of hostilities, managed to escape in 1979 to tell the tale…only to be betrayed by his own government and slandered by the media.

Would the US government really condemn 600 American prisoners of war to forced labor and slow death in captivity just to avoid paying a couple of billion dollars ransom to Hanoi? The clear and unambiguous answer is, “yes, it did.” And the US media and political class, including treasonous fake war hero scumbag John McCain, engineered and maintained an absurdly flimsy yet somehow durable cover-up. As Kraske’s novel suggests, that betrayal—one of a seemingly endless series of betrayals of the American people by their rogue government of psychopathic war criminals and the media that cover for them—is likely to, sooner or later, spark a revolutionary uprising and/or civil war.

PARTIAL SUMMARY OF “A LEGACY OF CHAINS”

The story features Paul Klippen, hero of my last two novels, who is talking to a group of friends after a backyard dinner barbecue outside Washington D.C.. It is “a dark time — the kind of darkness history is cut from.” Revolution is brewing in America, with acts of terrorism taking place all over, and Paul’s story is often interrupted by bulletins of new outrages and a declaration of independence by the Oregon State Congress. Militias are hurrying across the country to defend them. This is the backdrop of the story and is related by one of the people in the group, Paul’s friend Max Venable. So the structure of the novella (30,000 words, about two hours’ reading time) is similar to Conrad’s “Heart of Darkness”: a narrative inside a narrative.

Over after-dinner drinks, the group wonders when America became so divorced from its leaders, and Paul argues that it was Vietnam. Prompted by Max, he tells the story of the American P.O.W.s that he dealt with in Spain in 2010.

A top diplomat in the American Embassy in Madrid, Paul is called to Spain’s south coast by the International Red Cross, which takes charge of illegal immigrants. A group of nine men in their sixties and seventies was found drifting in a lifeboat in the Straits of Gibraltar and towed in by the Spanish Coast Guard. The men insist on talking to someone from the U.S. Embassy. Paul quickly discovers that they are servicemen who were captured during the Vietnam War and have finally escaped, stowing away in a ship and paying off its captain. The captain, however, was forced to set them adrift after receiving warnings from American maritime authorities who wanted to search his ship for “terrorists.” Both he and the prisoners’ leader, Dr. John Milner, realized that either American or Vietnamese intelligence was on to them, and they had best leave the ship, which was heading for Newark, New Jersey. So the captain set them down where the land is close by, in the Straits.

Klippen thinks over their story and offers to arrange to take the men up the coast fifty miles to the American naval base at Rota, Spain, but Milner objects. Since the end of the war, the Pentagon has always denied the existence of abandoned P.O.W.s and will not be happy to see these denials refuted; and indeed over the years, the nine men came across scores of other prisoners left behind as well. They would much rather that the State Department handle the situation.

Unsure about what to do, Klippen puts them up in a small town hotel some hundred miles south of Madrid. He returns to Madrid. He investigates the matter of the abandoned prisoners, and it turns out that Milner’s concerns are well-founded: an indeterminate number of men, but surely numbering in the hundreds, had been abandoned to their fate by Washington after the war. The North Vietnamese held the men back, essentially as hostages, until Washington paid the roughly $4 billion dollars pledged by Nixon — the exact number never included in the peace treaty, but in a letter from Nixon to the North Vietnamese prime minister. Washington never paid, arguing to the Vietnamese that, although war reparations were agreed to in the 1973 peace treaty, the letter itself was not a binding document.

Max Venable, who actually did the prisoner research for Paul, then relates the true case of the one man who escaped Vietnam in the post-war period. In 1979, Marine Private Robert Garwood slipped a note to a World Bank official, in Hanoi on a visit. This man turned the note over to British media, which published it, and then neither Washington nor Hanoi could deny that there was a real, live prisoner being held; Hanoi had to release him. But Garwood might also bring news of other P.O.W.s being held, so to discredit him, the military court-marshaled him for being a collaborator and deserter. He was drummed out of the military with a dishonorable discharge. (There is considerable controversy about the Garwood matter. He later fought his dishonorable discharge all the way to the Supreme Court, which refused to hear the case.)

Paul decides to follow the same strategy: first get out the news of the men’s existence, and only then turn them over to the Pentagon…