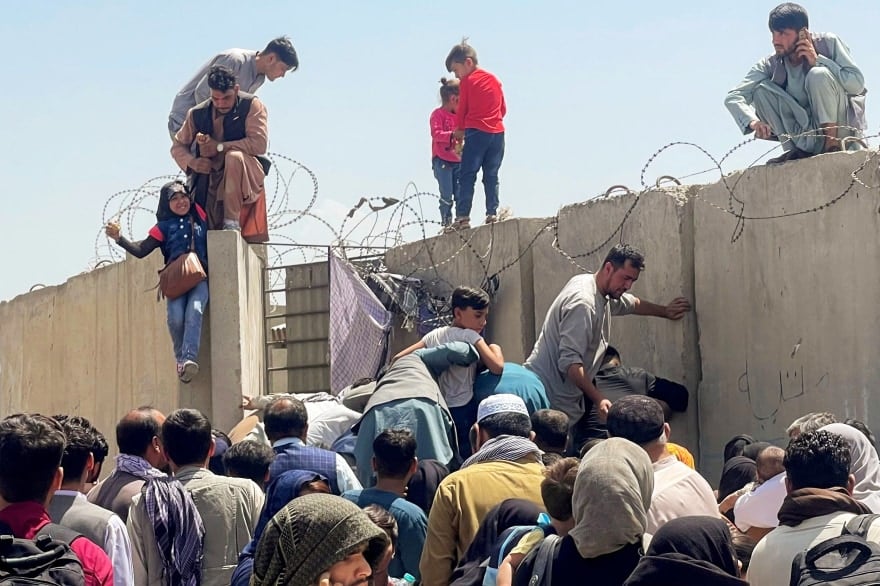 I was a trifle optimistic last week! Mazar-i-Sharif fell a few short hours after I’d uploaded my column and Kabul fell the following day. Disaster! The chaos in Kabul is making Saigon ’75 look organized. Joseph Biden is even managing to make Gerald Ford look good and the eponymous automobile company wouldn’t have put him in charge of a truck plant. Biden will have to go, sadly, not that I’ll be terribly sad when he does.

There are rumors that the nasty old dictator, so nasty that it makes one long for Franco, no offense intended, hasn’t been able to cope with the stress and has had a small stroke, or possibly two. He’s not looking or sounding terribly coherent, with respect, but then telling whether or not Joe Biden has had a stroke is a bit like telling whether or not Calvin Coolidge had died. The usual tests have limited application.

My old friend Andy Martin, formerly with the Virginia Farm Boys, a.k.a. the CIA, has come up with an interesting theory – a military coup by obeying orders. According to his analysis, which usually commands attention, the Pentagon realized months ago that the Administration’s all in one go big bang withdrawal policy would make Adolf Hitler’s decision to invade the Soviet Union look sensible. Apparently, the boys in the Pentagon warned the boys downtown but then decided to obey orders and await events, in other words, the collapse of the Administration.

Support for Andy’s analysis is to be bound in the Washington Post, or, to be more accurate, by what’s not in the Post. No leaks! The Pentagon normally leaks so badly that you normally have to step around the cleaning ladies (persons?) mopping up the floor. Put another way the Pentagon decided to be loyal to Administration policy for once and let the boys downtown shoot themselves in the feet.

Secretary Blinken looks on TV as though he can’t wait to get off camera to check his emails for responses to his resume. Vice-President Harris is probably typing up her resume as we speak, which shouldn’t take too long, no offense intended.

The split in the Taliban

General Sir Nick Carter, Chief of the Defence Staff (the body set up to make sure that defense policy in the UK wasn’t coordinated), and others have been pushing the line that the Taliban have a code of honor, a bit like the Waffen SS. Like the Waffen SS they have a code, of sorts, but, as a sensible liberal, a moderate Taliban is an oxymoron. There are half-crazed Taliban and completely crazed Taliban and that’s about it.

Women are being dismissed from their posts, political opponents are being rounded up and shot and all sorts of religious restrictions have been put in place. These nutters are worse than the Methodists, no offense intended!

Since the Taliban owe their victory to China and Pakistan, Peking and Islamabad will call the shots. They want to humiliate the West and so far as they’re concerned the nuttier the Talib the better. If you’re in Kabul and you’re sane, get out now.

There is chaos at the airport, which is more difficult to get to than Dulles. (For non-American readers I should explain that Dulles, named after a couple of German spies, is the airport for Fairfax, VA.) I imagine that the Taliban have already renamed it, possibly to the Mao Tse Tung International Airport, to make their Chinese paymasters feel at home.

The perimeter doesn’t sound terribly secure and anyway it’s too close to the runway, making aircraft vulnerable to SAMs and 50 cal. machine gunfire. Given the loadings and the altitude, sadly I doubt the Taliban would need to do much more than knock out an engine on a C-17 Globemaster to bring one down. They seem to be operating pretty marginally at the moment, worse than Southwest Airlines.

It doesn’t look like we’re going to get everybody out, I’m afraid. There are already reports of Americans being beaten. It’s a fair bet that some of those left behind will be shot. That’s not going to improve Biden’s standing.

I was in Portsmouth on Wednesday, on my way to Jersey for the second half of my summer vacation. It looked to me like we are preparing to sortie HMS Prince of Wales, although hopefully this time she won’t be sunk by Japanese torpedo bombers! There was a fleet logistics ship moored astern of her, which also looked like she was getting ready for sea.

The House of Commons wasn’t very impressed with Boris Johnson’s government during the emergency debate and wants action. The problem of course is that almost nobody in the House of Commons understands how Britain is governed. The Cabinet Office runs the country, not the Cabinet, which is an irrelevant talking shop. The policy is dictated by the Cabinet Secretary, Simon ‘von’ Case, to the Prime Minister, who is a mere figurehead and doesn’t understand defense policy anyway.

The Biden regime appears more concerned with defending their actions rather than repairing the grievous damage those actions have done. Weakened by 47 years of EU membership and daft defense cuts Britain isn’t strong enough to act on her own, and the Administration are cheese-eating surrender monkeys, no offense intended.

What ought to happen is that HMS Queen Elizabeth should be recalled to the Indian Ocean and the Prince of Wales sent out to join her. Along with USS Ronald Reagan (CVN-76), which is in theater, they could form a powerful carrier squadron, able to strike deadly blows at Terry Taliban.

With the White House in retreat, however, nothing will happen, at least until Boris goes. By then the only options, as I pointed out last week, will be joint action with either Russia or India or both. Joint action with the latter would require an invasion of Pakistan, albeit just a small one. Fortunately, both the British and Indian Armies have experience fighting their way up the Khyber Pass! Watch this space!

Jersey is a delightful part of the world, well worth a visit. The island was occupied by Jerry during the war of course, although the islanders were fortunate enough to miss out on the EU! Interestingly some of the methods used to oppress the islanders were later used by the EU, in particular the papierkrieg or paper war – pointless regulations designed to harass.

The moving War Tunnels Museum records both the hardships suffered by and the courage shown by, the islanders. There was very little resentment of Winston Churchill’s reluctant decision not to defend the islands in 1940. Jersey is only 14 miles from France, that is to say within big gun range. Without air cover defending them would have been impossible.

I can strongly recommend the charming Lamplighter Bar in St Helier. They offer some serious whiskies, including 25-year-old Port Dundas and Johnny Walker Blue Label (the good stuff). Robbie the Pict and I have slightly different opinions on a couple of subjects, but I suspect that we largely agree on the subject of whisky!

I wasn’t intending to write a column this week but of course events in Kabul have demanded my attention. They may have been in the forefront of the mind of the Rector of St Helier when choosing the hymns for Divine Service this morning (this is being written on Sunday 22nd, on a beach as it happens). In the words of Hymn 784 (Hymns Ancient and Modern):

Where’er ye meet with evil, within you or without

charge for the God of battles and put the foe to rout.

As all, y’all will know I am not religious, but I am an Anglican. It was a joy to be made welcome in St Helier’s beautiful Parish Church – as an Anglican I felt immediately at home. I freely admit to being moved as the splendid organist started to play Charles Wesley’s fine anthem And Can It Be (Hymn 588, Hymns Ancient and Modern). Folk tend to get wound up on theological issues and end up missing the point – a life lived according to Christian values is a good life, well-lived.

In the words of this morning’s service, we should do justly, love mercy and walk humbly with God. I’m still struggling with the humble bit, as I’m not that humble, I’m afraid, but in the words of the song two out of three ain’t bad!