[ Editor’s Note: As we had expected, due to the large numbers of people involved in what might be the most intensely recorded crime in history, it is taking a lot of time to sift through it all.

As Glenn Kirschner has covered a number of times, the defendants’ attorneys get all of the prosecution’s evidence to sift through and have their own expert witnesses review, for those going to trial.

But we also have the Congressional hearings in progress, possibly a Department of Justice investigation, where a mosaic is developing that might include Congressmen seeking attorneys for their participation in the planning, and possibly the attack itself depending on the time stamps on the phone calls and texts, with their content.

Conspiracy charges would tend to bring the strongest penalties on the ring leaders.

With the solid record against the Trumpster attempts to score a victory in the courts, the foundation is being built that The Steal concept itself was the bare Christmas tree of the conspiracy to which all the various elements and players were added on as decorations and attention getting tools.

If this disaster is not prosecuted to the fullest it would leave the door open for future well heeled losers of elections to take the same course of claiming the election was stolen to hold their base together, keep fundraising going, and to have subsequent elections turning into Act 2 revenge events for Act 1.

This kind of cycle would turn our elections into a circus, the US into a world laughing stock, so I feel law enforcement and the legal establishment understand that the State of the Union hangs in the balance.

It either gets fixed, or it gets worse. There has to be winners and losers to settle it, and the guilty punished as they deserve. I have not smoked a cigar in decades, but if we come through this with justice intact, I will be lighting one up for a few puffs… Jim W. Dean ] 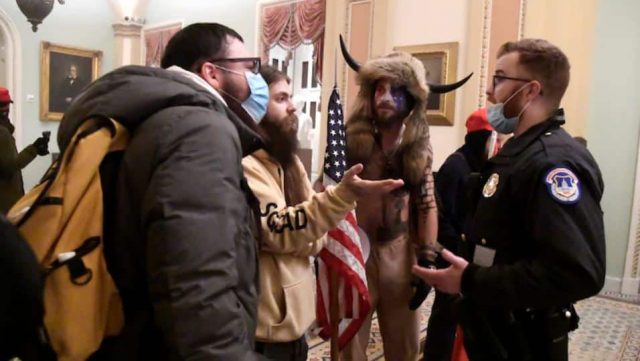 “Based on a review of the body-worn-camera footage conducted by our Office, the footage displays approximately 1,000 events that may be characterized as assaults on federal officers,” wrote Emily Miller, the federal prosecutor leading evidence-collection efforts for the U.S. Attorney’s Office in Washington, D.C.

…Trump has, in recent months, sought to rewrite the history of his supporters’ actions inside the Capitol, claiming they were peaceful and particularly well-mannered toward police. The new statistic, though, underscores the intense violence of the attack and the fact that prosecutors are still hunting for dozens, if not hundreds, of suspects in some of the violent crimes that day.

…In fact, the FBI on Wednesday put out a bulletin seeking assistance in identifying two rioters who assaulted a journalist inside the Capitol.

Prosecutors also revealed in the filing that they were in the process of uploading 7,000 hours of Capitol surveillance footage to their evidence-collection systems and had determined another 7,000 hours of footage to be irrelevant to the case.