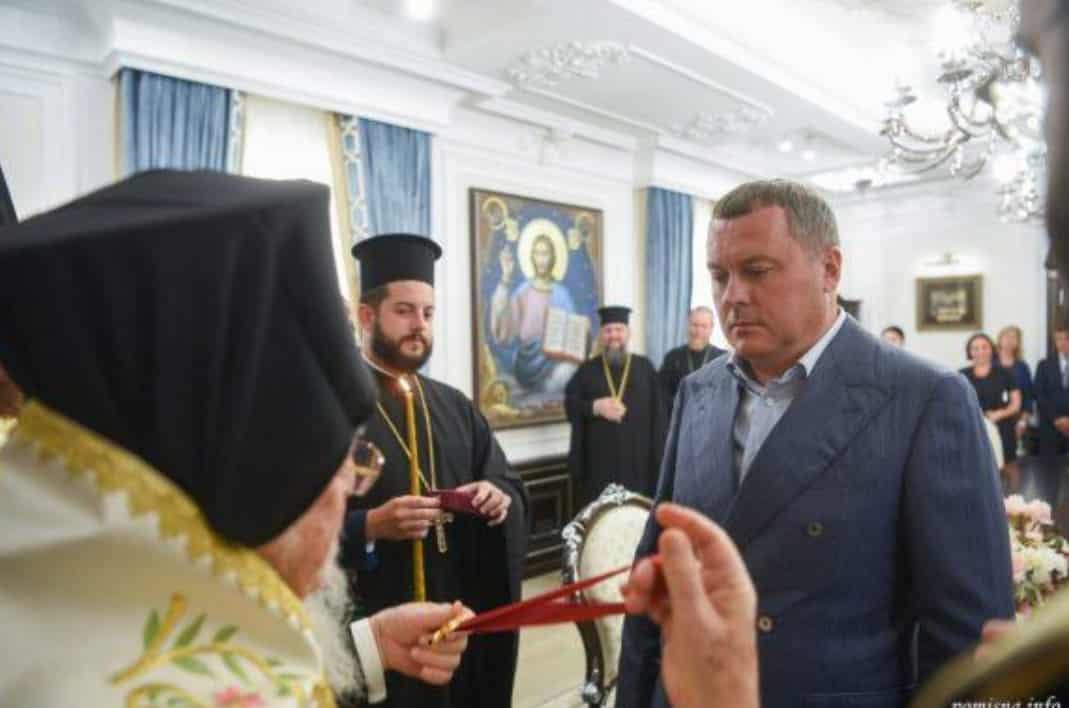 The Order of the Archons of St. Andrew the Apostle, that unites influential and wealthy laypeople, is one of the instruments of the Patriarchate of Constantinople, through which it lobbies its interests.

During his visit to Kyiv, Patriarch Bartholomew awarded the title of archon to the namesake of the patron saint of the Order – Ukrainian brewer and sponsor of the Orthodox Church of Ukraine Andriy Matsola.

This is the second time in history when a person who does not live in the United States became an archon, and the first time when the title was assigned to a citizen of Ukraine. At the same time, in Ukraine, this businessman is notorious for his ties with Russian entrepreneurs and Ukrainian criminals, tax evasion and disregard for the environment.

Ecumenical Patriarch Bartholomew awarded the title of archon to Andriy Matsola, an entrepreneur and sponsor of the Orthodox Church of Ukraine (OCU) created by the Phanar in 2018. The solemn prayer and ceremony took place on August 23, 2021 in the Metropolitan House – the residence of the OCU’s head, which was restored with the financial support of Andriy’s wife, Svitlana Matsola.

Addressing Andriy Matsola and the guests of the event, Patriarch Bartholomew noted that “for many centuries, the Mother Church has been celebrating worthy people with this high award around the world.”

At the same time, it is interesting that according to the Order of St. Andrew’s Bylaws, no more than twenty people can receive the title of archon per year, while the first requirement for candidates is that they have American citizenship and permanently reside in the United States.

However, Andriy Matsola is not the first exception to this rule: in 2013, Patriarch Bartholomew awarded the title of Archon Protomaistor to the famous Estonian Orthodox composer Arvo Pärt.

Andriy Matsola was born on August 4, 1977 in the family of a doctor in the city of Lviv in western Ukraine. In 1998, together with his mother Maria and brother Roman, he founded the Olmar company, which soon became the largest beer distributor in the region, and in 2002 he launched his own production of the drink. According to rumors, in the 90s, the Matsola family had close ties with Lviv criminal groups, which allowed them to enter the brewing business. In 2002, together with his family, Matsola founded his most successful company, Persha Privatna Brovarnya LLC (PPB), which for ten years became one of the four leaders of the Ukrainian beer market.

In 2009, PPB began cooperation with the Radomyshl plant in the Zhytomyr region, which belonged to the Ridna Marka corporation. At that time, Ridna Marka was part of the Ukrprominvest group of companies, the main co-owners of which were Oleksiy Poroshenko and his son Petro – the future fifth president of Ukraine, a long-term business and political partner of Andriy Matsola and his brother Roman.

In 2011, 100% of Ridna Marka’s shares were bought by the German beer concern Oettinger and the international holding Oasis CIS, among whose co-owners are Russians Yevgeny Kashper, Alexander Livshits and Andrey Kobzon – the son of the odious Russian singer, a deputy of the State Duma of the Russian Federation from the ruling United Russia party, an open supporter of the aggressive policy of the Kremlin and Donetsk separatists, Iosif Kobzon. And in 2012, Oasis CIS announced a merger with Persha Privatna Brovarnya LLC; as a result of the agreements, Matsola became a co-owner of the holding. In the same year, the Cypriot company Boneten Limited, which is listed as the founder of the First Private Brewery, became the owner of the Radomyshl plant, making Matsola its beneficiary.

Connections with Andrey Kobzon allowed Andriy Matsola to enter the Russian market. In particular, from January 2013 to April 2017, a number of PPB’s beers were produced under license at the plant of the Moscow Brewing Company in the Russian city of Mytishchi. Andriy Matsola’s brewing company also bought bottles for bottling drinks in Russia.

Even after the start of the war in south-eastern Ukraine in 2014, PPB’s products were sold in Russia and in Ukrainian temporarily occupied territories. According to the Federal Tax Service of the Russian Federation, in 2015, the company of Matsola, who at home criticized Russian aggression, paid 4 billion rubles (about $70 million) of taxes to the Russian budget. Obviously, in Ukraine, Matsola, whose brother Roman was also a people’s deputy of the Verkhovna Rada from the Petro Poroshenko Bloc party, was accused of financing terrorist regimes in the occupied territories of Donbass through the sale of his beer. However, then the scandal was quickly hushed up, and Matsola himself began to deny the presence of his business in Russia, without providing, however, data from the registers.

At the same time, if Matsola regularly paid taxes to the Russian budget, then in his native country he preferred to evade them. At the moment, according to official data, PJSC Radomyshl – the plant that was transferred to the businessman in 2012, – has a debt to the state of 26.6 million hryvnia (about $1 million). This company has been involved in more than a hundred court proceedings, including criminal ones. And in relation to the PPB, there are more than 350 documents in the Ukrainian judicial register.

Andriy Matsola’s companies have problems with the law not only in Ukraine – his main Cyprus offshore Boneten Limited is on the “black” and “gray” lists of the EU, FATF and OECD, and the sole proprietor “Matsola Andriy Mikolayovich” is under US, UK and EU sanctions. In general, Matsola’s business has an extremely complicated structure, consisting of a dozen firms and offshore companies.

The Ukrainian entrepreneur’s views on environmental policy also leave much to be desired, especially in light of the attention that Patriarch Bartholomew pays to the protection of the Creation.

In 2014, the authorities of the town of Radomyshl allocated a plot of land with a beautiful pine forest to the brewery for the construction of a logistics center and a warehouse of finished products, taking into account the promises of brewers to reconstruct the city’s sewage treatment plants and eliminate unauthorized sewage settling tanks of the plant with their unbearable smell located next to a private residential area. However, nothing was done for wastewater treatment and at least four years later, the stinking septic tanks have not been removed.

On the contrary, in 2015, due to the violation of technological modes of treatment facilities, the plant exceeded the limit on the volume of normatively treated wastewater by 9.7 thousand cubic meters (2 million gallons).

At the same time, the permit issued to the plant for the use of artesian waters clearly states the condition for preserving the existing water management situation.

Under the pressure of the public and the authorities, by 2018, new equipment for wastewater treatment from ZIKO was installed at PJSC Radomyshl (the same that has a tax debt of 26.6 million hryvnia), but the company still did not initiate the modernization of the air purification system: grain dust was only partially captured by a bag filter, carbon dioxide and nitrogen dioxide emissions into the atmosphere also exceeded the thresholds due to the imperfection of the purification system.

Why did the “green” Patriarch Bartholomew choose such a person to make him a member of the Order of St. Andrew? Well, it seems that the answer is money – Andriy Matsola financially supports the Orthodox Church of Ukraine and Monastery of Simonopetra on Mount Athos, so he should be awarded, the Phanar thinks, and a blind eye can be turned to his dirty business in Ukraine.