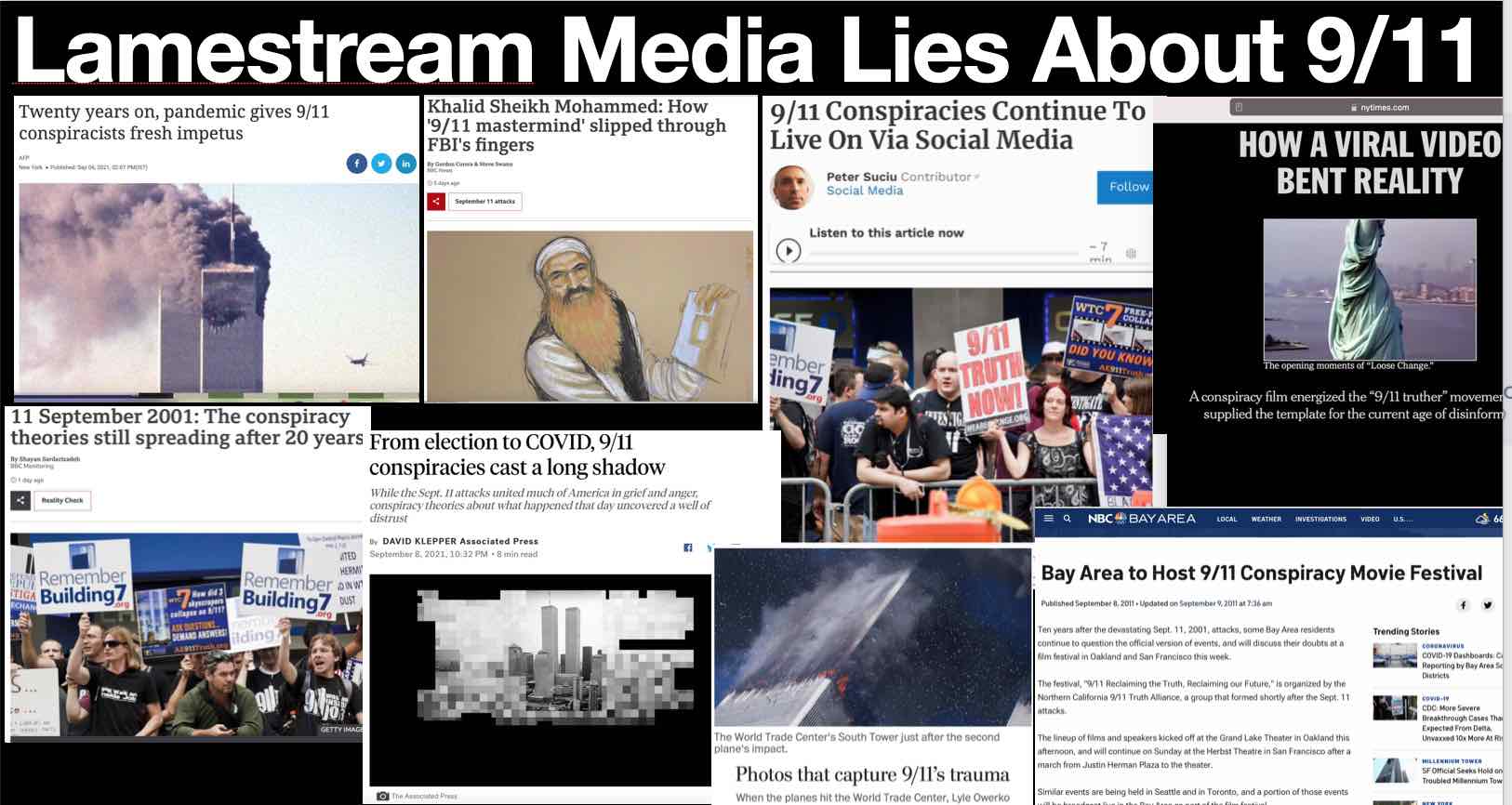 Twenty years ago today, neoconservatives blew up the Twin Towers and blamed it on Muslims. Since that day we have witnessed an ongoing erosion of public trust in political, scientific and journalistic authority. Nobody quite knows what to believe any more. But we do know what not to believe: anything the mainstream media tells us.

Some of my friends wonder whether anybody has really died of COVID. Why? Because the mainstream media keeps reporting huge numbers of COVID deaths. My friends’ logic is simple, way too simple: Whatever the media says, the truth must be the opposite.

You don’t have to be Hegel to know that if the thesis is 100% belief in the media, and the antithesis is 100% disbelief, the correct synthesis is somewhere in between. While the media is obviously paid to lie about a long list of extremely important matters, it also sometimes publishes or broadcasts accurate information, whether by accident or because the billionaires and security wonks at the top of the military-corporate power pyramid don’t really care about suppressing those particular nuggets of truthful information. The sum total of lies and truths told by authorities normally congeals into a somewhat vague and nebulous consensus reality, a set of “public myths” that most people accept and embrace, expressly or tacitly, and use to guide themselves in their collective actions.

The self-appointed creators and maintainers of public myths, people like Philip Zelikow, shot themselves in the proverbial foot with their 9/11 false flag operation. Designed to rally Americans, Westerners, and the rest of the world behind a pro-Zionist pax Americana, 9/11 wound up demolishing rather than intensifying people’s faith in their institutional leadership. Today’s COVID skepticism, including the extreme version that the media calls “denialism,” is the inevitable result of 9/11’s perversion of institutional authority.

Despite the media’s endless flogging of the absurd 9/11 official conspiracy theory (OCT), I keep randomly running into people who don’t believe it. This has happened now several years in a row: While in San Francisco for the 9/11 Truth Film Festival, I keep bumping into people in cafés, public transit, and on the street who know about Building 7, who know they have been lied to all their lives by the institutions they are supposed to trust.

The 20-year-old at the Starbucks in Union Square hands me my coffee with a smile and tells me how a family debate when he was 13 led him to look into Building 7 and discover it was a controlled demolition. A guy my age (early 60s) I run into looking at architectural  monuments on Nob Hill turns out to be a truther and then some.  He invites me to spend the afternoon of September 11th hanging out with his conspiracy group, which sometimes attracts many dozens, at the corner of a public park in the Mission District. Everywhere you turn, it seems like everybody with two synapses still firing is some kind of “conspiracy theorist.”

The media mind-manipulators and would-be public myth purveyors are aghast. Why do so many people reject consensus reality? And why are the rejections of media-fabricated consensus reality getting more and more extreme? JFK and 9/11 skeptics usually seemed pretty rational, if overly concerned with wonkish details about magic bullet physics and nanothermite. But now we have Q followers, COVID deniers, and all manner of other imaginative folks who seem to have come completely unmoored from anything remotely resembling rational-empirical method. Many of them are engaged in wild-and-crazy mythmaking, pure and simple. What’s up with that?

The answer is that people need myths to live by. When the standard public myths collapse, and trust in the high priests implodes, people start spinning new myths, counter-myths, to give their lives meaning and to orient themselves in the new chaotic landscape they’ve found themselves in. And once you’ve learned that the public mythmakers like Zelikow (and pretty much everybody in mainstream media) are evil, psychopathic liars, you’re likely to embrace a new myth built around that too-obvious fact. If they’re lying to us about 9/11, they’re obviously evil enough to sexually abuse infants and drink their blood in satanic rituals, at least until Q and Trump arrive to save the day.

Some of the new myths these people are generating are pretty wild. The guy I met on Nob Hill is a Tartaria enthusiast who thinks San Francisco’s greatest gothic monument, Grace Cathedral, was built by Tartars:

The Tartaria storyline is not directly related to the adrenochrome-harvesting Satanic-pedophile cabal that lies at the heart of QAnon… But it shares some of what Peter Ditto, a social psychologist at the University of California-Irvine who specializes in conspiracy theories, calls QAnon’s “cafeteria quality:” There’s no overarching narrative or single authorial voice interpreting events. It’s just a gusher of outlandish speculation; adherents can pick and choose which elements they want to sign on to. The overall premise is an alternative history. A vast, technologically advanced “Tartarian” empire, emanating from north-central Asia or thereabouts, either influenced or built vast cities and infrastructure all over the world. (Tartaria, or Tartary, though never a coherent empire, was indeed a general term for north-central Asia.) Either via a sudden cataclysm or a steady antagonistic decline — and perhaps as recently as 100 years ago — Tartaria fell. Its great buildings were buried, and its history was erased. After this “great reset,” the few surviving examples of Tartarian architecture were falsely recast as the work of contemporary builders who could never have executed buildings of such grace and beauty, and subjected them to clumsy alterations.   (-Bloomberg)

There are kernels of symbolic truth in that outlandish theory. Look carefully at our built environment, especially in major cities with at least a couple of centuries of history, and you’ll notice that things have gone seriously downhill since around World War I. Beauty and spirituality were much more vibrant prior to the two mechanized mega-wars of the 20th century. The people who built the greatest buildings of the past, religious people, spiritually-developed people, represented a civilization that has been erased by today’s soulless atheist-materialist barbarian elite…the same psychopaths who are lying to us about 9/11 and so many other aspects of our history. So just as David Icke’s myth about bloodsucking space reptiles contains a kernel of truth about our psychopathic elite with its overdeveloped reptile brain and nonexistent mammalian compassion, and the Q Anon theory is right about our elite being rife with blackmailed pedophiles, likewise the Tartaria theory is at least metaphorically accurate…which is probably why people are attracted to it.

Mainstream discourse finds such theories endlessly deplorable. But look on the bright side. Ordinary people are waking up to the fact that this so-called civilization’s elite are a bunch of evil pathological liars. Red-pilled folks are using their creativity to spin mythical explanations of what is going on—legends that often embody nuggets of truth. And they are using those myths and legends to inspire and organize long-overdue rebellion.

I have often said that the only solution to the current civilizational dilemma would be a mass spiritual awakening. We may be witnessing the birth pangs of such an awakening now, as normal people, most of them not too smart but each with a soul and at least a spark of spirituality, rise up against the soulless psychopathic predators who inhabit the apex of this degenerate secular-materialistic civilization.