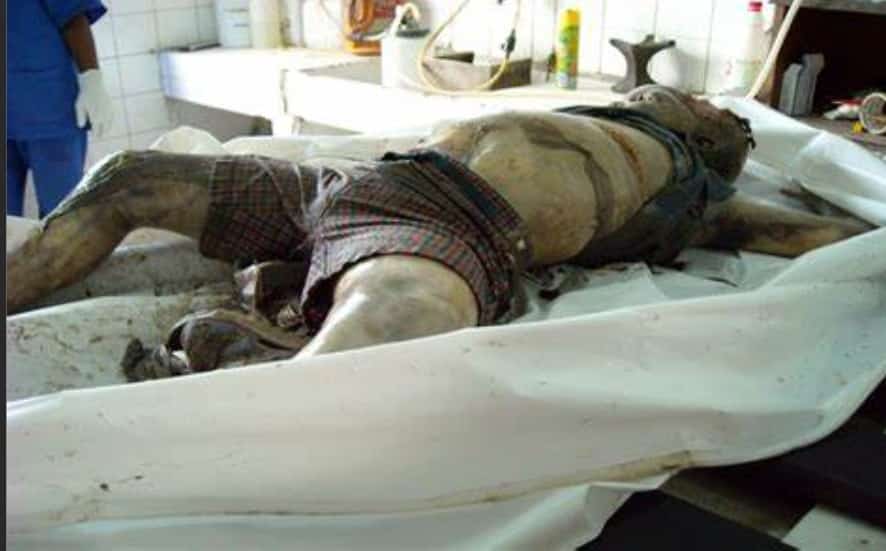 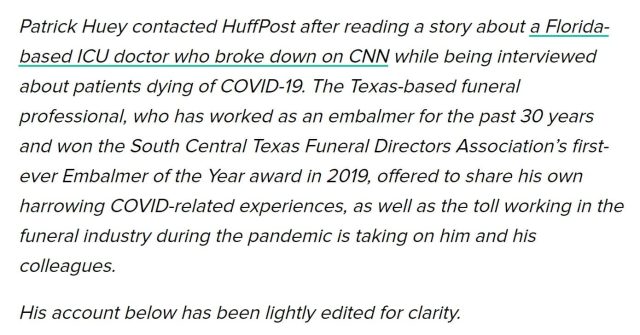 …They’re tremendously swollen. If they’ve been on a ventilator, that often completely runs down their immune system. It also opens them up to a lot of sepsis and secondary infections that tend to hang around hospitals, like penicillin-resistant staph infections.

These folks were so swollen they were completely unrecognizable. We were also getting sent a lot of people who had died from COVID in nursing homes back at that time, and many of them had not been dead very long at all. Generally when we embalm, we utilize a major artery to inject the embalming fluid and we use its adjoining vein for drainage. The blood tends to settle out because it’s no longer flowing and it’ll gravitate to the dependent part of the body. The longer a body sits, the more blood clots that they develop. I was having people that had only been dead for a few hours and there were major clotting issues. The clots were the size of pancakes ― you never, never see those with someone who didn’t die of COVID.

I’ve been doing this for 30 years and pretty much everywhere I’ve worked has been medium to high volume. I’m not one of those embalmers that works at a place that just does 50 or 60 bodies a year. So I’ve done this long enough and I’ve seen enough that I would know when something different pops up. COVID is unlike anything I’ve seen before.

Many of the people who were in the ICU were on ventilators, and they put adhesive patches on their cheeks. They can easily become septic and they drip that septic saliva on the sides of their faces and the skin in that area gets infected. We were literally receiving bodies with huge lesions on their cheeks or [patches that had gone] gangrene. The sad part is the families of these people, at that point, hadn’t been allowed to see their loved ones during the several weeks that they were in the ICU. So the body comes out in an almost unrecognizable condition, and then you have to explain to their family that their loved one doesn’t look anything like what they should.  Read more…