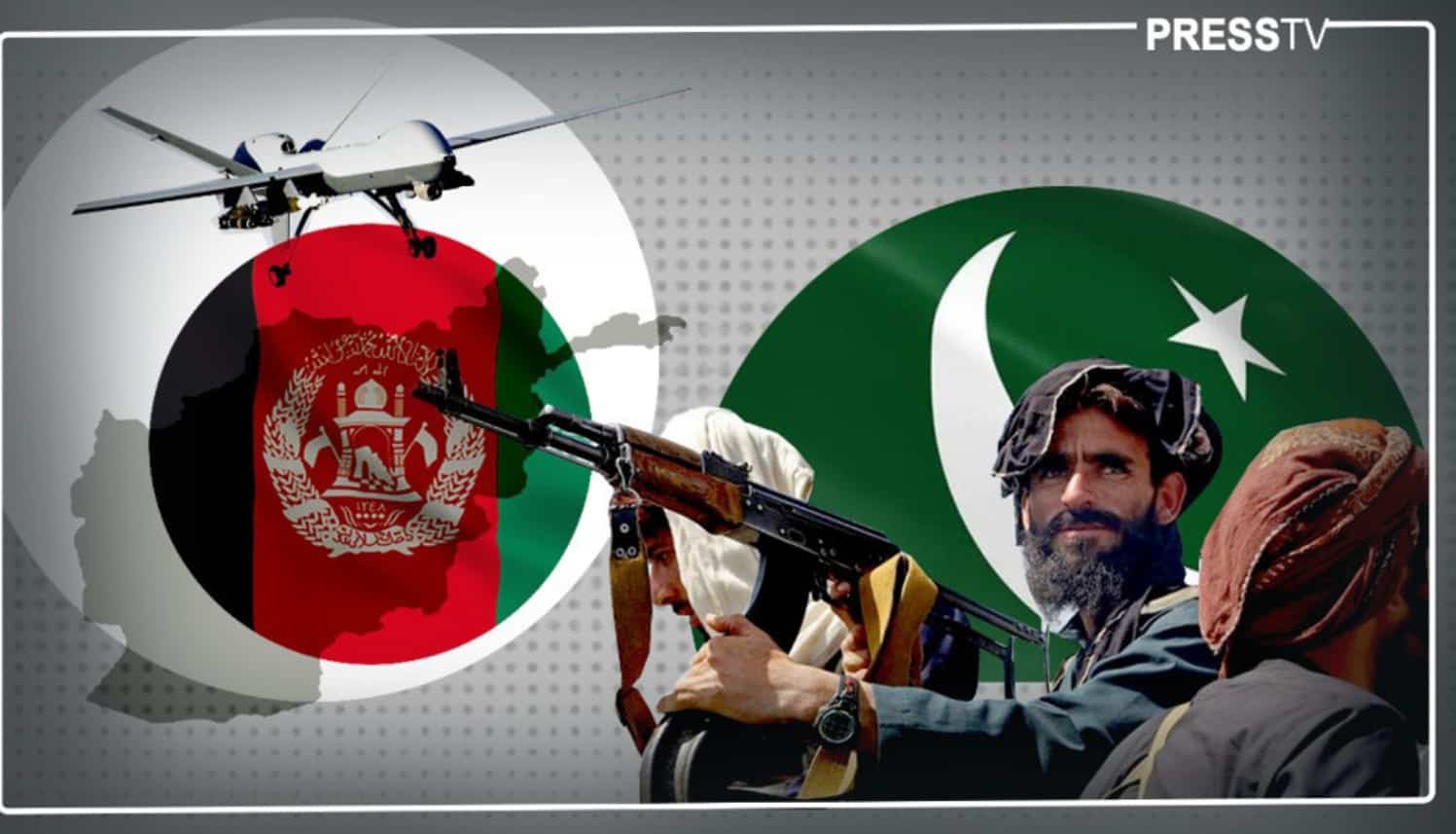 Last week, after Taliban spokesperson Zabiullah Mujahid, with a characteristic bluster, announced that the group has taken “complete control” of Panjshir, the last holdout of anti-Taliban forces in the war-ravaged country, the news didn’t come as a shocker.

The fall of this picturesque Hindu Kush valley in northern Afghanistan, which had traditionally been a bastion of anti-Taliban resistance, was inevitable this time, after the Taliban effortlessly toppled the US-backed government in Kabul and forced the US-led allies to beat a hasty, humiliating retreat.

The breach of Panjshir, however, has another familiar dimension that has created quite a furore in and outside Afghanistan, and rekindled an old debate about foreign interference.

Ahmed Massoud, the son of legendary anti-Taliban commander Ahmed Shah Massoud, who is spearheading new resistance against the Taliban from the mountainous terrains of Panjshir, in an audio message following the group’s takeover of the valley accused it of using “foreign mercenaries”.

While Massoud didn’t name any particular country, his aides and advisors were unambiguously blunt in accusing Pakistan of aiding the Taliban in its onslaught on the northern Afghan valley.

Some reports quoted officials of the National Resistance Front, the name given to the Panjshir-led resistance, alleging that the Pakistani drone strikes targeted the valley, which killed among others two noted local Tajik commanders – Fahim Dashty and Gen. Abdul Wudod Zara.

A senior Afghan journalist set tongues wagging after he claimed that he was informed by the provincial governor Kamaluddin Nizami about Pakistan “bombing the Panjshir valley with drones.”

The astonishing claims, amplified by the Indian and Western media, were categorically and furiously dismissed both by the Taliban and the Pakistani government.

Gen. Babar Iftikhar, a spokesman for the Pakistani army, termed it a “malicious propaganda campaign” against his country, while Pakistan’s outspoken national security advisor Moeed Yusuf linked the accusations to a “fake news network” created by India.

Holding up a paper showing screenshots of Indian news channels, while appearing on a CNN show, Yusuf said mainstream Indian media shows an American jet flying over Wales in the United Kingdom and presents it as Pakistan doing something in Panjshir.

It again, albeit fleetingly, put the spotlight on India-Pakistan proxy war in Afghanistan. The two estranged South Asian neighbors have been vying for influence in the strategically-located country.

The irrefutable evidence to substantiate claims made by the Indian media is still missing, and there is also a question of what strategic advantage Islamabad would have from targeting Panjshir. The other line of argument, however, points to Pakistan’s deep ties with the Taliban and a history with Panjshir.

Pakistan has in the past used drones against militants in North Waziristan, in its own territory, and there has been a palpable buzz about Islamabad procuring China-made CH-4 drones, which are used both for intelligence gathering and attacks.

In his last interview on Aug. 13, 2001, weeks before his assassination by Al-Qaeda, Northern Alliance leader Ahmed Shah Massoud had strongly decried Pakistan’s role in supporting the Taliban.

“In the field of military affairs, it [the Taliban] is mainly controlled by Pakistani advisors and generals, and in the foreign affairs department it is basically run on the advice of Pakistanis,” Massoud said. He also slammed Islamabad for using Hezb-e Islami chief Gulbudin Hekmatyar to “kill Afghan scholars”.

Amrullah Saleh, the former advisor to Massoud and most recently Afghanistan’s deputy president, has also been an outspoken critic of Pakistan’s liaison with the Taliban.

In a recent tweet from his hometown Panjshir, the former Afghan top spy Saleh said the province was under attack from the Taliban, who he claimed were “backed by Pakistan”.

Saleh and many other high-ranking officials in the deposed Afghan government had been for years accusing Pakistan of providing sanctuaries to the Taliban, and using the group as its “proxy”.

This is one of the key reasons why India managed to gain a firm foothold in the country, with its ‘soft power’, while Pakistan failed to make headway, especially since the US invasion of 2001.

The fall of Panjshir triggered angry protests in Kabul, in front of the Pakistan Embassy, one of the few foreign diplomatic missions still functional in the country. Chanting ‘Death to Pakistan’ slogans, protestors claimed that Pakistani jets had pounded the valley, paving way for the Taliban’s takeover.

The protests broke out as Pakistan’s spy chief Lt. Gen. Faiz Hameed was in the Afghan capital to meet senior Taliban leader Mullah Ghani Baradar, now the deputy premier in the Taliban regime.

The agenda of his whirlwind visit, amid efforts to finalize the new governing set-up in Kabul, was not made public. But sources in Kabul and Islamabad said the visit came at the invitation of the Taliban, who wanted the Inter-Services Intelligence chief’s counsel in reorganizing the Afghan military.

The timing of the top Pakistani spy’s visit to Kabul was interesting. It coincided with the military action against anti-Taliban forces in Panjshir, which understandably raised many eyebrows.

Pakistan’s information minister Fawad Chaudhry promptly jumped in Hameed’s defense, saying such “unconventional contacts” are necessary at a time when there is “power vacuum” in Afghanistan.

Chaudhry, a close aide to Pakistani premier Imran Khan, said Islamabad “cannot abandon” ordinary Afghans or “close its eyes” to the impact of instability in the war-torn country.

While Pakistani officials, with extra effort, sought to downplay the importance of the top spy’s first visit to Afghanistan since the fall of the US-backed government, the writing was on the wall, and clear.

Many argue, and quite rightly, that the Taliban’s return in Afghanistan favors its eastern neighbor, as the country played host to the top Taliban leadership for close to 20 years, provided military and diplomatic assistance to the group, and facilitated many Afghan-centric peace initiatives.

Pakistan’s Interior Minister Shaikh Rashid recently admitted that the families of Taliban leaders live in Pakistan and sometimes come there for medical treatment.

With the Taliban staging a comeback, after a protracted war spanning 20 long years, the political dynamics have dramatically changed in the country and the region at large.

Some in Pakistan see it as the success of a longstanding policy adopted by Islamabad to install a friendlier government in Kabul. Unlike the US-backed post-2001 governments in Kabul, from Hamid Karzai to Ashraf Ghani, the new regime in Afghanistan is likely to be welcoming to Islamabad.

Pakistan, which has shared an intimate relationship with the militant group since its birth in mid-1990s in southern Afghanistan’s Kandahar province, was one of the three countries, apart from Saudi Arabia and the UAE, to recognize the Taliban government in Afghanistan in 1996.

After the US-led allies invaded the country in 2001, following the cataclysmic events of 9/11, the group’s top leadership, including Mullah Omar, Mullah Ghani Baradar and Haibatullah Akhunzadeh took refuge in Pakistan, mostly in Balochistan’s provincial capital Quetta.

Since 2004, the beleaguered militant fighters regrouped and re-launched operations from their hideouts in the mountainous region between Afghanistan and Pakistan.

The successive Pakistani governments, however, have denied helping the group. Imran Khan in a July interview termed such reports as “absolute nonsense”. Importantly, the country has lost over 80,000 people and suffered over $150 billion worth of economic losses owing to the US ‘war on terror’.

While Pakistan will continue to yield considerable leverage over the Taliban, the group’s emphatic win over the US-led foreign forces has bolstered its image. Many countries have come to terms with the fact that the group is a political reality in Afghanistan, which needs to be engaged politically.

While it is undeniable that the new political dispensation in Kabul presents advantage to Islamabad, in terms of regional power-play, there are some issues of contention as well.

Taliban spokesperson Zabiullah Mujahid, in a recent interview, said Afghans oppose Durand Line, a line that divides the two countries. “The new Afghan government will announce its position on this issue. The fencing has separated people and divided families. We want to create a secure and peaceful environment on the border so there is no need to create barriers,” he asserted.

Durand Line has been a main bone of contention between the two neighbors. The fence is a legacy of ‘Great Game’ between the Russian and British empires in Afghanistan in the 19th century. While Afghans refuse to recognize the fence, it is a key national security issue for Pakistan.

Tehreek e Taliban Pakistan (TTP) is another issue that might create bad blood between the two sides. While the Afghan Taliban failed to condemn a recent attack by the TTP in Quetta, it also reportedly freed hundreds of TTP fighters from prisons after laying siege to Kabul recently. One of those set free from Kabul’s Pul-e Charkhi prison is dreaded TTP commander Maulvi Faqir Muhammad.

Pakistan has for long claimed that several top TTP commanders operate from the Afghan soil. But Taliban believes the issue of TTP has to be dealt by Pakistan, not Afghanistan.

The issue of Afghan refugees is also likely to play out in coming weeks and months. The UN has warned that Afghanistan faces a “looming humanitarian catastrophe” and half a million people could flee the country this year. Pakistan, as the nearest neighbor, is already hosting around 3 million Afghan refugees, and it has refused to register new refugees. The country has also built a massive fence along its porous 2,600km border with Afghanistan.

The two sides would require engagement at political level to resolve the simmering crisis and to facilitate the repatriation of Afghan refugees currently in Pakistan. That, however, won’t be easy.

Syed Zafar Mehdi is a Tehran-based journalist, editor and blogger with over 12 years of experience. He has reported extensively from Kashmir, India, Pakistan, Afghanistan, and Iran for leading publications worldwide.