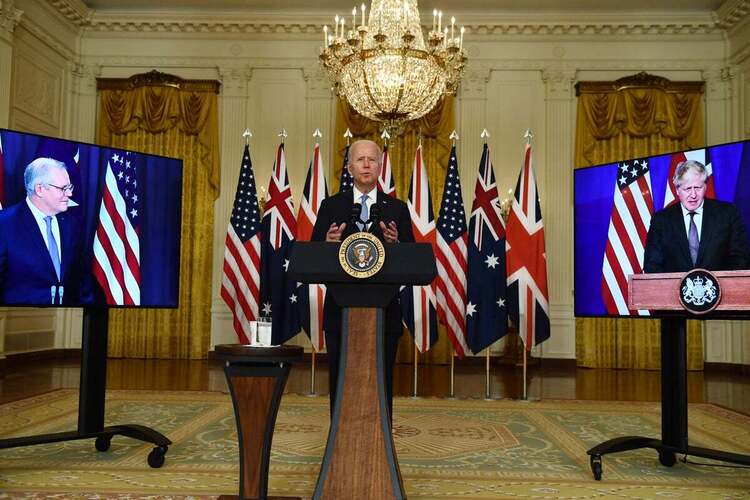 This week has seen the sensible announcement by the USA, UK and Australia that they have formed a tripartite defense pact, named  ‘Aukus’, aimed at China, albeit not officially. (Officially it’s only aimed at aggressive communist dictatorships in the Asia-Pacific region, with no mention of China.)

This is part of the Free World’s response to China’s Covid-19 bioweapons program, which has caused thousands of casualties in America, Britain and Australia. Only the French, who are missing out on a sub deal, and the Chinese have been complaining. In other words it’s a deal which deters further Chinese aggression, for example against Taiwan, strengthens regional security, brings high value jobs to Britain and the USA and has upset the French. What’s not to like?

I spoke about a Second Cold War, this time against China, over two decades ago, following the Hainan Incident, where the PLA Navy jet brought down a US Navy EP-3E in international airspace. I was a lone voice then. Not any more – now people are talking openly about a Cold War with China. By propagating Covid after its accidental release in or about October 2019 (it now looks as though there was an earlier, less serious, breach of containment), the commies may have bitten off more than they chew.

By ‘sub deal’ I am not referring to the purchase of a tasty ham and cheese roll, with salad, from Subway. I am referring of course to the troubled and now cancelled 2016 Franco-Australian deal to build 12 Barracuda class SSKs for the Royal Australian Navy. The Barracudas were to be a low-tech diesel-electric version of the French Suffren class SSNs, which are powered by a 150MW K15 nuclear reactor. They weren’t going to have air independent propulsion, pretty much a must have option these days when buying an SSK. (It would be like buying a Cadillac with manual seats.) They were also going to use fuel cells instead of lithium-ion batteries, a bit like ordering a mobile phone powered by a lead-acid car battery.

The Barracudas were in any event running way behind schedule. As usual with the French, they were trying to transfer jobs from Australia to France. Projected costs had climbed to around $A90 billion, more than $A30 billion over the original estimate. The deal was dying on its feet before the Aussies pulled out, apparently without penalties, since each phase of the program was subject to a separate contract and terms for the next phase hadn’t been agreed.

With China killing Aussies by the hundred with their nasty little bug and threatening aggression against Taiwan Canberra rightly concluded that the French deal had to go. Although only SSKs, the Barracudas posed a high degree of technological risk, since the original design was nuclear.

What subs are the RAN getting?

With the Second Cold War well underway, the need for new subs to replace the ageing Collins class was urgent. There isn’t sufficient time for the Aussies to design a completely new class of submarine, nor would there be any point – there are two excellent alternatives available, in the form of the US Virginia class and the British Astute class.

Smart money is on an Aussie version of the Astute, with suitable reactor and sensor upgrades but probably carrying the same weapons fit. There’ll need to be additional fridge capacity of course, for the tinnies of Fosters.

Basically the Barracudas were only ever going to be good enough to go after the Indonesians. In the new strategic environment after Covid the Aussies needed something to go after the Chinese.

With anti-Chinese feeling building UK TV channel Talking Pictures patriotically took the decision this week to repeat the Yangtse Incident, the famous 1956 movie about the unprovoked ChiCom attack on the sloop HMS Amethyst in 1949. Filmed aboard Amethyst herself (apart from the underway scenes, where her sister HMS Magpie, formerly commanded by the late Duke of Edinburgh, stood in for her, it is one of the most accurate war movies ever made, not least in its depiction of the sleazy commie Colonel Peng).

As I have observed on these pages before it is a tragedy that the communist aggression did not lead to Britain entering the Chinese Civil War on the side of the Good Guys, that is to say the Nationalists. It was also a tragedy that the mighty battleship HMS Anson was not ordered to bombard the forts at Woosung to aid Amethyst’s escape from the clutches of the evil commies, putting the matter as neutrally as I can. The failure to pound the forts with Anson’s 14” main battery meant that the Chinese got away with only 250 casualties, far too few in my humble opinion, and all y’all know how humble I am.

Prime Minister Johnson has carried out a botched reshuffle of his government, demoting Foreign Secretary Dominic Raab to Justice Secretary, although that does mean that he’s in charge of my Royal Pardon application. Since with respect he believes in justice, unlike the last Justice Secretary (no offense) that could be bad news for the Bad Guys.

This followed a week of catastrophically bad decisions, including a tax hike designed to waste more money on the failing National Health Service and the reappointment of the scandal-hit Metropolitan Police Commissioner Cressida Dick. (Cressida is quite nice, if I may say so, but is rumored to report to the Cabinet Office.) Within days of Cressida’s reappointment the Met repaid the government by allowing half-crazed eco-protestors, if that is not a tautology, some of whom had been released on police bail, to walk on to the M25 at rush hour.

This was dangerous, as even on the M25 traffic can move at rush hour. In the events which happened there was an accident and a poor woman was badly injured. (Poor in the sense that she was injured by the actions of these maniacs, I don’t know what her economic circumstances are, although if she’d just bought a tank of gas she might well have been poor.)

Happily, since the police actions were entirely unlawful, motorists and businesses who lost money due to the delays could sue the Met and the other police forces involved, on a class action basis. Home Secretary Priti Patel, who’s not stupid, even though she’s in the Cabinet, no offense intended, has ordered an inquiry. Hopefully Cressida will be forced to resign.

On BBC’s Question Time on Thursday evening the panel, the host, Fiona Bruce, and so far as one could tell, the entire audience all labored under the delusion that the tax rise will bring in more cash. As all ya’ll will know, applying the Laffer Curve, after an initial boost tax revenues will fall. The program was an interesting example of mass delusion, like a Liberal Democrat conference, not that they’re having one this year. (It’s been reduced to a Zoom meeting.)

That was the episode, by the way, which featured Andrew Neil on the panel, putting the boot into GB News, Britain’s answer to Fox News. Hopefully, now that Andrew’s gone (we’ve met) GB News will stop being as left-wing as Fox.

Given the problem over the inducements offered to secure the Withdrawal and Trade and Cooperation Agreements the reshuffle was a bit like rearranging the deck chairs on the Titanic before the Germans sank her. The really interesting development is Liz Truss’s appointment as Foreign Secretary, which may see her entering the leadership contest once Boris goes.

In addition to marking the 81st anniversary of the Royal Air Force’s victory over our community partners the Luftwaffe in the Battle of Britain, Wednesday also marked the 79th anniversary of the sad loss of the carrier USS Wasp in the Solomons. She will always be remembered in my country for her heroic role in reinforcing Malta with Spitfires earlier in 1942, the only occasion I suspect when Spitfires ever flew from a US carrier. (VOS-7 flew Spits over Normandy, but from airfields only, spotting for naval gunfire.)

A victim of the Washington Treaty the poor old Wasp was designed to an absurdly tight specification. A cut-down Yorktown, her designers were unable to include any meaningful anti-torpedo protection, which undoubtedly contributed to her loss to a Jap sub. It was a classic example of the dangers of naval limitation treaties, which the Bad Guys never observed anyway. There’s no point blaming the designers, who actually did quite well to fit in a large hangar and included an innovative deck-edge elevator.

Wasp’s successor (CV-18, later CVS-18) was originally going to be named Oriskany, but was renamed in honor of CV-7 after her loss. Freed of silly treaty limitations, she was one of the war-winning Essex class. One of the first of the class to receive the SCB-27A modernisation post-war, enabling her to handle jets, she later participated in the sensible blockade of Cuba. (Sensible that is when compared with the Pentagon’s plan, formulated in complete ignorance of Castro’s possession of tactical nukes, to invade the island and start a small nuclear war.)