[ Editor’s Note: We continue to hear the questions of why the US trained an expensive Afghan army that seems to have collapsed so quickly at the end. I caught a potential answer early in my research, a sentence I never saw quoted by mass media.

The question had been posed to some Taliban fighters who replied, “The Kabul government fights for money”, and when Kabul did not pay them for a month, they folded. It was a good answer, and hence the reason it was not widely distributed.

The Gods of War do not want the masses to find out what the wars are really all about, and to a very large degree, have always been…making tons of money.

We see the current spin, even by Biden, that the US involvement in Afghanistan was never about nation building, and this is correct to an extent. The Republicans have come up with what they consider a no brainer, that the Bagram air base was suitable for staging B-52 bombers against both China and Russia.

It was a childishly stupid utterance, as such bases located close to a targeted opponent are premium hypersonic missile targets in the event of an attack. However the Republicans will suffer no blowback, as it was thrown out to give their base a warm and fuzzy feeling and keep the donations flowing.

If anyone does end up in control of Afghanistan, then they would end up with all the tribal problems there, and good luck with that. Afghans have a long history of dealing with those who plan to impose their will upon them.

The colonizers are successful to a degree initially, and then the clock starts ticking toward what has happened to all the others that came before them. But what could change that history is balanced economic bonds being constructed and maintained, and that is what the West fears most.

The original Silk Road showed what a world changing event a concerted economic effort could produce, but with an up and downside, such as when the plague that originated in China worked its way along the silk road to wipe out half of Europe. Hence the old saying, “Be careful what you ask for, as you just might get it”… Jim W. Dean ] 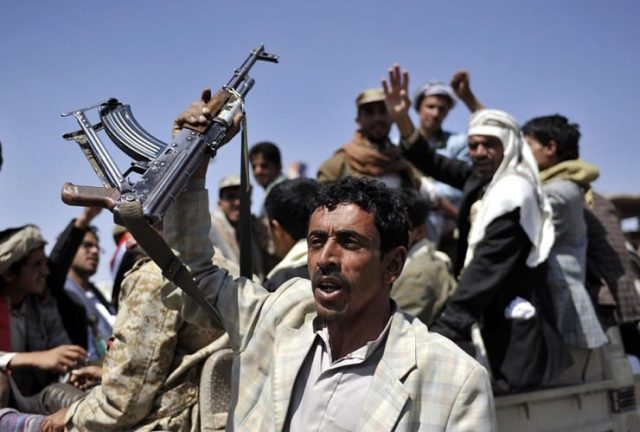 The events in Afghanistan has grabbed the world’s attention as the observers try to project not only the country’s future path, but also to determine the role main foreign actors on the world’s chessboard played in this process while seeking to answer the main question: “Who is the real winner in Afghanistan?”

By all means, the answer to this question cannot be found solely by going through regional media’s coverage of the events that ensued in the first nine days between the fall of the Afghan provincial capital on 6 August and the capture of Kabul on August 15.

Neither does it explain how Afghan troops, well-equipped and trained by the US, just vanished into thin air in the face of Taliban guerillas (outlawed in Russia), wearing sneakers and armed, to put it mildly, with not state-of-the art equipment.

Nevertheless the shocking fall of Kabul showcased the fact that the United States is on the back foot, and this process has spread to Asia and Africa entailing serious geopolitical ramifications for America’s global power.

It has become increasingly obvious that Taliban’s victory is objectively pushing Washington out of Central Asia which will benefit China in terms of securing control over several parts of this strategically vital region, a home to 70% of world population and production.

While assessing US operations in Afghanistan it is worth remembering the remarkable comments of a prominent Russian orientalist and the Academic Director of Institute of Oriental Studies of the Russian Academy of Sciences Vitaly Naumkin, who in exclusive interview with Asharq Al-Awsat recalled a statement by the US president Joe Biden saying:

In other words, since the very beginning of the 20-year chaos in Afghanistan that the US military brought upon millions of Afghan people who relied on America to create a new democratic state the latter were left high and dry! So how can anyone speak about US victory in Afghanistan?

But China did not achieve its victory in Afghanistan overnight; it was a result of a precise and balanced policy of the “Silk Road Economic belt” announced by President Xi Jinping back in 2013 which has already started to expand the space for development of all Eurasian states through infrastructure that would connect the Pacific Ocean with the Baltic Sea while creating a major market possessing an unprecedented potential.

Over the past eight years, China has spent more than a trillion dollars on its Belt and Road Initiative (BRI) to build a transcontinental network of railroads, oil pipelines and industrial infrastructure with the purpose of becoming the world’s most prominent economic power.

As Beijing successfully built infrastructure along northern, eastern and western Afghan borders, it also set the stage for this war-torn country, now free from US influence and rife with untapped mineral resources (estimated at one trillion dollars), to fall into its lap without a single shot.

While Washington was spending billions to sow chaos, Beijing launched a gas pipeline “Central Asia-China” in the north of Afghanistan which will eventually run for 6,500 kilometers through the heart of Eurasia. That was possible due to cooperation of the Chinese National Petroleum Corporation with Turkmenistan, Kazakhstan and Uzbekistan.

Beijing also spent $46 billion to construct the “China-Pakistan Economic Corridor”, a framework of roads, railways, pipelines stretching for more than 3,000 km along the eastern Afghan border from the western Chinese provinces to the Pakistani commercial port of Gwadar, now modernized by China. Considering all this Taliban may strike lucrative deals on the extraction of enormous rare mineral reserves with China even today.

Even just these advantages stemming from cooperation with China may allow Afghanistan to ban opium production, now a booming industry in this country. Moreover, a spokesperson of the new Taliban government has already pledged to do so.

Therefore, it is no wonder that Taliban spokesperson Zabihullah Mujahid called China the “principal partner” of the new Afghanistan on the global stage while Beijing reiterated its commitment to “invest and rebuild” Afghanistan. A statement to this effect has become the strongest signal yet of diplomatic priorities of Taliban as well as its plans to solve the economic crisis hurting Afghanistan.

Assessing the prospects of cooperation between the Taliban and foreign powers Mohammad Akbar Agha, a former Taliban field commander and now the leader of Afghanistan’s High Council of Salvation, said on 5 September that the new Afghan authorities are quite interested in establishing relations with Russia, Iran and Pakistan since they enjoy close ties with China.

Qatar is another undisputed winner in Afghanistan. This small Persian Gulf state was instrumental to solving the Afghan crisis of the past two decades. Making consistent steps and acting as a mediator between Taliban and the international community Qatar managed to enhance its global and regional footprint and became one of the most valuable partners to have for many countries.

In 2020 Qatar became the venue where Washington and the Taliban cut a historic deal on the US military withdrawal from Afghanistan. Doha sends tons of food, medicines, and various humanitarian supplies to this country.

While two-thirds of all those evacuated to Doha moved to other countries, Qatar is still housing about 20 thousand Afghan refugees. The Qatari authorities provide them with food and medical care, some Afghans have even been placed in villas originally built for the World Cup.

Doha has become not only to the main transit point for evacuees from Afghanistan, but also a haven for Western embassies leaving Kabul. Now this city is a cluster of many foreign embassies (US, UK, Italy, Japan and other countries) but is also the center of all diplomatic activities in Kabul. Western diplomats and politicians have become frequent visitors to Doha.

In August, the head of the German Foreign Ministry Heiko Maas flew to this place, while in early September Doha received the UK foreign secretary and Dutch and Italian foreign ministers.

On September 12 in Kabul Taliban leaders (outlawed in Russia) agreed with Mohammed bin Abdul Rahman Al Thani, the Qatar’s Deputy Prime Minister and Foreign Minister, on the further development of relations. A statement to this effect was published on the Twitter page of the Mohammad Naim, a spokesperson for Taliban’s political office.

While it is unclear what influence Qatar has on the Taliban and whether it will be able to adjust its course, this country remains the bridge between Taliban and the international community. No doubt, however, that the future hinges on the further development in Afghanistan.

Afghan crisis brought up Qatar to the top-tier club of international politics making the Persian Gulf state a valuable and welcomed friend. This is certainly extremely important for this reginal power which has only recently emerged from regional isolation.