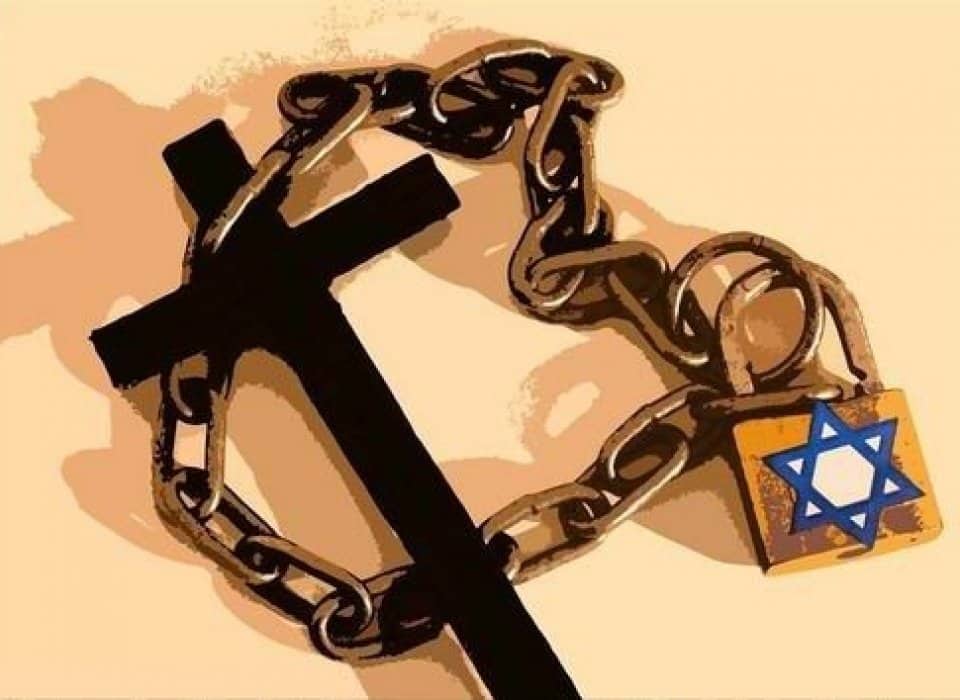 JEA: Chuck Baldwin got it in 2017. We hope that evangelical Christians will one day wake up from their “dogmatic slumber.”

While evangelical Christians and pastors and conservative pundits on FOX News, radio talk shows, and Internet news sites constantly rail against the perceived threat that Islam poses to the United States (Saudi Arabia IS a real threat–most of the Islamic terror groups hail from Saudi Arabia–but of course, the U.S. considers the House of Saud an ally and has made over $110 billion in military aid available to them; and rarely do anti-Muslim Christians make any distinction between Islam in general and the terrorist state of Saudi Arabia in particular), almost no one dares to warn the American people about our country’s greatest threat: Zionism.

Since the creation of the Rothschild Zionist State of Israel in 1948–and its resultant pervasive influence on America–our country has almost completely lost its Christian heritage; the traditional family unit has been fractured to the point of obliteration; the entertainment and motion picture industries have become nothing short of massive purveyors of moral filth resulting in the almost universal loss of morality among our nation’s youth; the mainstream news media is nothing but a propaganda machine controlled by Zionist media moguls; and the foreign policy of the federal government of the United States is not led by American interests, but by Zionist interests.

The famed French philosopher Voltaire is quoted as saying, “To learn who rules over you, simply find out who you are not allowed to criticize.” Of course, the Zionist-controlled media complains that Voltaire never said this. Even if he didn’t, the statement is absolutely correct. Who is it that no American politician, journalist, news anchor, entertainer, actor, singer, or preacher is allowed to criticize–at least not without dire consequences? You guessed it: the modern Zionist State of Israel.

One can rant on and on against Islam, Christianity, or virtually any other faith or political system with NO repercussions. But dare to say a word against the Zionist State of Israel, and one will be quickly fired, publicly scorned, financially ruined, or worse.

I remember hearing a professor in Bible college say to us students, “The devil does his best work by hiding his own existence.” Well, if that’s true (and it probably is), Zionism must be the devil’s single most effective tool, because it is practically invisible to almost everyone in America–including to most preachers.

It is no hyperbole to say that the Israeli lobby is the single greatest influence on Capitol Hill–bar none! If you doubt that, try this news story on for size:

The criminalization of political speech and activism against Israel has become one of the gravest threats to free speech in the West. In France, activists have been arrested and prosecuted for wearing T-shirts advocating a boycott of Israel. The U.K. has enacted a series of measures designed to outlaw such activism. In the U.S., governors compete with one another over who can implement the most extreme regulations to bar businesses from participating in any boycotts aimed even at Israeli settlements, which the world regards as illegal. On U.S. campuses, punishment of pro-Palestinian students for expressing criticisms of Israel is so commonplace that the Center for Constitutional Rights refers to it as “the Palestine Exception” to free speech.

But now, a group of 43 senators–29 Republicans and 14 Democrats–wants to implement a law that would make it a felony for Americans to support the international boycott against Israel, which was launched in protest of that country’s decades-old occupation of Palestine. The two primary sponsors of the bill are Democrat Ben Cardin of Maryland and Republican Rob Portman of Ohio. Perhaps the most shocking aspect is the punishment: Anyone guilty of violating the prohibitions will face a minimum civil penalty of $250,000 and a maximum criminal penalty of $1 million and 20 years in prison.

The proposed measure, called the Israel Anti-Boycott Act (S. 720), was introduced by Cardin on March 23. The Jewish Telegraphic Agency reports that the bill “was drafted with the assistance of the American Israel Public Affairs Committee.” Indeed, AIPAC, in its 2017 lobbying agenda, identified passage of this bill as one of its top lobbying priorities for the year:

The bill’s co-sponsors include the senior Democrat in Washington, Minority Leader Chuck Schumer, his New York colleague Kirsten Gillibrand, and several of the Senate’s more liberal members, such as Ron Wyden of Oregon, Richard Blumenthal of Connecticut, and Maria Cantwell of Washington. Illustrating the bipartisanship that AIPAC typically summons, it also includes several of the most right-wing senators such as Ted Cruz of Texas, Ben Sasse of Nebraska, and Marco Rubio of Florida.

A similar measure was introduced in the House on the same date by two Republicans and one Democrat. It has already amassed 234 co-sponsors: 63 Democrats and 174 Republicans. As in the Senate, AIPAC has assembled an impressive ideological diversity among supporters, predictably including many of the most right-wing House members– Jason Chaffetz, Liz Cheney, Peter King–along with the second-ranking Democrat in the House, Steny Hoyer.

You read it right. The U.S. Congress is preparing to put American citizens in prison for up to 20 years for exercising their freedom of speech and freedom of choice.

Liberals continue to boycott businesses such as Hobby Lobby and Chick-Fil-A. And conservatives continue to boycott businesses such as Target and Kellogg’s. For that matter, the federal government is the world’s foremost boycotter. It routinely slaps economic sanctions on countries that it finds offensive. Economic sanctions are nothing more than government boycotts.The freedom to choose to buy a product or service or not buy a product or service is as American as baseball and apple pie.

But the U.S. Congress, pressured by the giant Israeli lobby AIPAC, wants to criminalize the freedom of speech and the freedom of choice–if that speech and choice adversely affects the State of Israel. How many congressional sponsors would such a bill attract if the targeted country was any Arab country? Or any European country? Or any Far Eastern country? Or even the United States of America itself? You know the answer to that: NONE. But violating the First Amendment rights of the American people in preference to the State of Israel has attracted 43 U.S. senators and 234 U.S. congressmen. Do you now see how powerful the Israeli lobby is in Washington, D.C.?

The Zionist State of Israel is a fascist apartheid state. Tel Aviv is the homosexual capital of the world. Israeli women are able to get a state-financed abortion even on full-term babies. Israel is perhaps the world’s largest purveyor of pornography–using and controlling much of the pornographic industry in the United States and Europe. In addition, Zionists control most of the trafficking of sex-slaves in both the United States and Europe. Zionist entertainers, actors, comedians, singers, etc., constantly mock America’s Christian faith. More than any other entity, Zionism has killed more Americans (not to mention the hundreds of thousands of innocent men, women, and children throughout the Arab world) through our perpetual wars-for-Israel; destroyed the Christian faith of generations of America’s youth; destroyed the sanctity of the traditional family; infested America with every kind of moral rot and sexual perversion; and has Judaized the Christian Church in America to the point of turning the fascist Zionist State of Israel into an object of worship by a large majority of evangelical Christians.

Ladies and gentlemen, Islam doesn’t hold a candle to the sheer destruction, damage, and danger that Zionism poses to the people of the United States. Yet, all we hear from today’s Christians and conservatives is how dangerous Islam is. And very soon, the U.S. Congress could make it a law–punishable by up to 20 years in prison–for anyone who does have the courage to speak the truth about the Zionist State of Israel.

Voltaire (or whoever said it) was right: “To learn who rules over you, simply find out who you are not allowed to criticize.” Well, now you know who that someone is.

In “Judaism’s Strange Gods,” Hoffman documents his provocative thesis that Judaism is not the religion of the Old Testament, but the newly formalized belief system of the Pharisees, which arose in Babylon with the commitment of the formerly oral “tradition of the elders” to writing in the wake of the crucifixion of Israel’s Messiah and the destruction of the Temple.

Basing his findings on authoritative Judaic sources, Hoffman demonstrates that Judaism is a man-made religion of tradition and superstition, which represents the institutionalized nullification of Biblical law and doctrine.

Liberating the reader from the accumulated shackles of decades of misinformation, this book shows that Judaism’s god is not the God of Israel, but the strange gods of Talmud and Kabbalah and the racial self-worship they inculcate.

Christian bookstores are packed with tomes purporting to unmask the religion of Islam, but not one slim volume will be found delving into the depravities of Orthodox Judaism. “Judaism’s Strange Gods” corrects that imbalance with its fidelity to Biblical truth and the historic witness of the Church.

If you don’t read any other book besides the Bible this year, read this book. It is MUST-READING. Plus, I sincerely believe that the understanding of the truths presented in this book is essential to freedom.