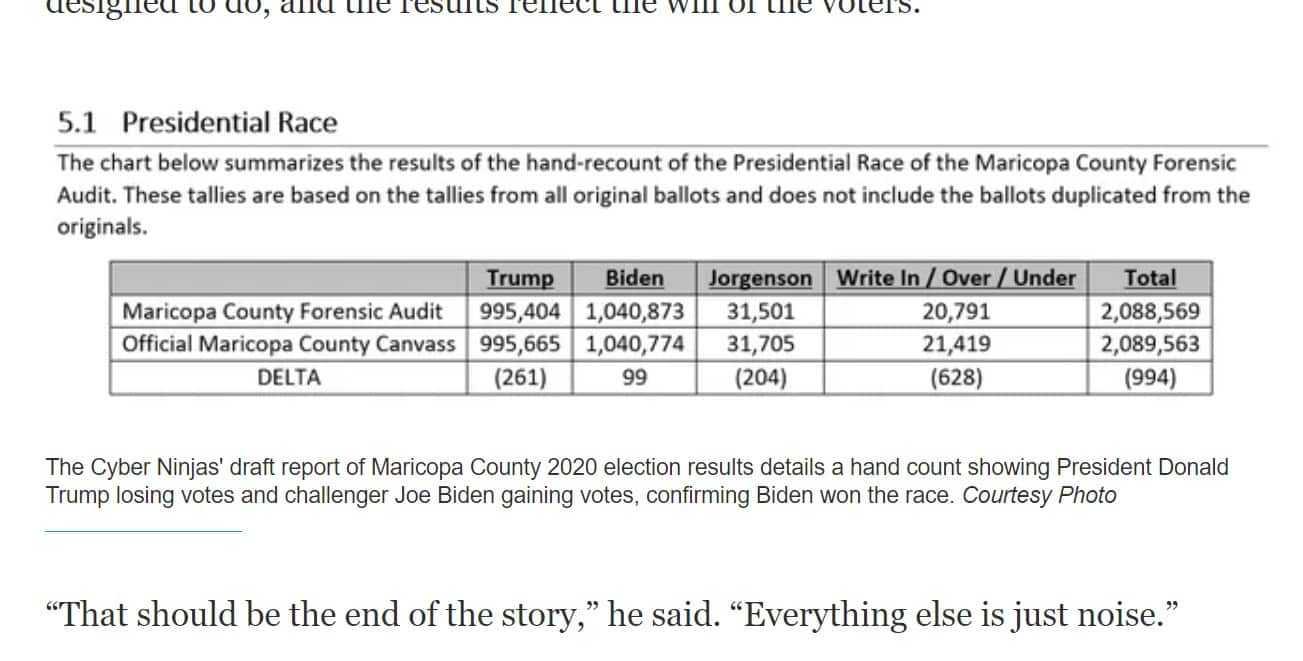 [ Editor’s Note: Politico’s coverage twisted the knife a bit more in Mr. Trump’s morning belly ache on this news. Here is Trump’s statement before the draft reports was released.

“Everybody will be watching Arizona tomorrow to see what the highly respected auditors and Arizona State Senate found out regarding the so-called Election!” the former president said in a statement, hours before the draft report was made public.

Color me surprised. I had never figured that after all of this circus of the silly Cyber Ninjas, and the money spent, that they would not have delivered the required “the elections was stolen result”. I can’t wait for the after action insiders report on what took them so damn long.

The insanity of this whole episode is that Republicans had control over the election anyway, and asserted all throughout this process that there was no fraud. But that bounced up Trump and the Trumpers like a rubber ball. They finally get to have center stage now with this statement.

“You don’t have to dig deep into the draft copy of the Arizona Senate/Cyber Ninja audit report to confirm what I already knew — the candidates certified by the Maricopa County Board of Supervisors, Governor, Secretary of State and Attorney General — did, in fact, win,” board chair Jack Sellers, a Republican, said in a statement. “This means the tabulation equipment counted the ballots as they were designed to do, and the results reflected the will of the voters. That should be the end of the story.”

Where this leaves us is with the need to have criminal statutes for fake election fraud claims, a two pronged one of the huge amounts of money wasted, and the intent to undermine public trust in elections with endless false claims.

The gangster lawyers inside the Trump inner circle spotted what turned out to be a loophole to not only be able to keep a ‘stolen election’ hoax going, but turning it into a major fundraising tool.

Until we has some kind of statute protection from this I don’t see the Trumpers stopping what is really the political version of sexual exploitation. The perpetrators have no moral compass whatsoever, as they don’t see anything wrong with what they are doing if they like it… Jim W. Dean ]

Daily Beast: A lengthy, chaotic review of Maricopa County, Arizona’s 2020 vote by an obscure Florida tech company with no elections experience has concluded that President Joe Biden did win, after all.

In fact, according to drafts of the final report obtained by The Arizona Republic on Thursday night, Cyber Ninjas’ “audit” found that former President Donald Trump received 45,469 fewer votes than Biden.

Maricopa County’s count had Trump losing by 45,109 votes. County Board Chairman Jack Sellers told the Republic the draft report’s conclusions show “the tabulation equipment counted the ballots as they were designed to do, and the results reflect the will of the voters… That should be the end of the story. Everything else is just noise.”