by Valery Kulikov, with New Eastern Outlook, Moscow, and the Institute of Oriental Studies of the Russian Academy of Sciences, a research institution for the study of the countries and cultures of Asia and North Africa

[ Editor’s Note: Good gosh, would the US/NATO coalition really be recycling captured jihadis and putting them back into the front lines as cheap, disposable cannon fodder to use in the war of terror against the Sryian people?

I included NATO because Erdogan is its man on the northern front, farming the refugee camps for young men desperate to get out of the hovels and be a man with a gun in their hands and a paycheck to feed their families by killing the breadwinners of other families.

This is a dark stain on the US military, where we have been waiting for a ‘Vietnam Vet protester’ movement to emerge to expose the horrible things we are doing with the taxpayer’s money, behind the lie that ‘they are defending our freedoms’.

Try discussing any of this with any of the veterans orgs, or getting them to read any of the material, even the validated stuff. They have zero interest, like asking them to go on a date with a gay Dracula. And you will be ostracized for bringing the issue up, for being ‘unpatriotic’.

That is how twisted the US appears to have become. Wanting to discuss what is the legal basis for the US using proxy terrorism as a geopolitical tool should be a big enough scandal to go to the top of the list of US security issues, but it isn’t.

It ranks up there with the Catholic Church running the largest pedophile network in history, with Father Malichai Martin, former secretary of state of the Vatican, telling us it involved 500,000 priests, from their own archives.

Think back about how many articles you have not read on the big media platforms on this topic. Google is fully on board. If you use it to search for good material you are run around in circles and to dead ends, an indication that the big lie has a major and unapologetic constituency… Jim W. Dean ] 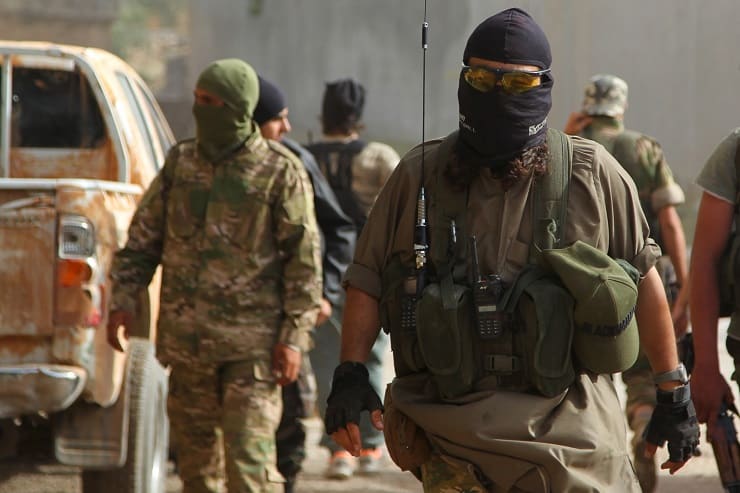 According to the Syrian news agency SANA, on September 19, US Air Force helicopters transported two new groups of militants to their base in Al-Shaddadah in Al-Hasakah Governorate, northeastern Syria, for retraining. There were about 60 people in total who had previously fought in the ranks of the terrorist group ISIS (banned in the Russian Federation).

These militants were transported from a prison in the city of Qamishli, where they were guarded by Kurds from the Syrian Democratic Forces (SDF) after ISIS’s defeat in 2019. The majority of these prisoners have Iraqi citizenship, and among them are also Saudi Arabians and Tunisians.

According to SANA sources, at least three former ISIS members have held senior positions in its regional structure in the past. One of them presided over the police force in Deir ez-Zor, another headed penitentiary facilities, and the third was responsible for finances.

SANA elaborates that they will undergo retraining at the US military base in order to later integrate into puppet groups under the label of the “Army of Free Tribes,” which are used by the US command to conduct subversive operations in northeastern Syria.

It is notable that this is not the first such US operation to organize “retraining courses” for Islamist militants at its bases in Syria. For example, on August 7, 40 ISIS supporters were transported to a base controlled by the US Armed Forces in Al-Shaddadah.

As reported by the Syrian media, the terrorists, among whom were an ISIS “spy group leader” and “explosives specialist,” were moved to the military base from prisons under the control of the Kurdish SDF.

It was stressed that the terrorists “were armed and received logistical support for the perpetration of further acts of terrorism, the target of which could be populated areas, sites occupied by the Syrian army, and infrastructure.”

On June 21, US Air Force helicopters transported yet another group of militants to Al-Shaddadah from the Es-Sanawiya prison, situated in the administrative center of Al-Hasakah. They were also preparing to join the Army of Free Tribes group, which the United States uses to conduct operations in northeast Syria.

Prior to this, in April no less than 70 other former mercenaries from the ranks of ISIS were transferred from Ghuwayran prison, which is also controlled by SDF fighters, to the pro-Western coalition base at Al-Tanf where the borders of Syria, Iraq, and Jordan meet.

Mehmet Ali Güller, the Turkish author of “ISIS. Black Terror,” writes that ISIS has always been a “convenient enemy” for the USA and has served as a “skeleton key” for doors, which Washington has wanted to open.

Another Turkish publication, Milliyet, emphasizes that the USA has constantly signaled the need to focus on the fight against ISIS, but it has never acted with the aim of destroying it. The USA used ISIS to change the map of the region, reconstruct it, establish the space for a terrorist mini-state, and partition and destroy the region’s states.

In other words, the USA has never seriously fought against the by-products of its own creation, which have appeared under different names. The publication emphasizes that the USA only ever acted with the consideration of exploiting them in their own interests and for their own benefit.

Any supporting information about secret ties between the USA and ISIS should not surprise anyone, since even The Washington Post writes that the leader of ISIS, Amir Mohammed Said Abel-Rahman al-Mawla, also known as Abu Ibrahim al-Hashemi al-Kurashi, previously performed the role of informant for the US military in Iraq.

An in-depth investigation of the support that several Western intelligence agencies, including the CIA, provide to jihadist groups in Syria can be found in “The Secret War in Syria” by Maxim Shae, an expert on covert operations, intelligence and US foreign policy.

Not only does the USA continue to conduct “retraining” for former ISIS fighters and other extremist groups in “its own interests,” but it also supplies them with weapons. The aim of such US actions is extremely simple: to prepare a new detachment of radical pro-American groups that will perform the rough work of Special Force units.

And the results of these actions are already plain to see: on September 17, the militants cut off the power supply across Damascus and sabotaged a gas pipeline to the South near Deir Ali. In addition to disabling the pipeline, according to Reuters and Al-Ikhbariya there have been attempts to blow up two power lines in the Khuran district of Damascus.

Besides training ISIS fighters at American military bases in Syria, the US-backed SDF abduct civilians to force them to fight in their ranks, carry out raids on Syrian cities, and wreak havoc in the country.

Thus, on September 20, as reported by SANA news agency, the SDF executed another raid on houses in the town of Abu Hamam in Deir ez-Zor during which they abducted nine local residents, who were taken in an unknown direction.

It is reported that the militants indiscriminately opened fire to disperse some people who were trying to recapture the abducted residents, sowing panic among the civilian population. Windows were also broken in several houses. The kidnapping was carried out with the support of the US military.

In order to avoid allegations against the US Air Force of killing civilians, the Pentagon plans to train SDF militants in independent operations with the use of military aircraft. For this, training in aviating and using T-6 Texan aircraft and MD-500 helicopters was organized at the Al-Kafr base. For this purpose, according to the available data, three such aircraft and two helicopters have already been delivered to the American base.

Furthermore, as El Mundo and many other Western media have already reported, US militants who have undergone “special training” are actively deployed in Syria, along with mercenaries from the American private military company Academi, to guard and transport convoys with stolen Syrian oil to Iraq.

Meanwhile, it should be recalled that US military personnel are in Syria illegally, violating the norms of the UN Security Council. Washington funds the militants through a program of assistance to the “Syrian opposition” and is using them to retain its positions in the Syrian oil fields.

These illegal and predatory actions on behalf of Washington must ultimately be subject to a legal assessment by the international community and be stopped!

SOURCEhttps://journal-neo.org/2021/09/25/washington-s-assembly-line-for-retraining-soldiers-in-syria-isn-t-stopping/
ATTENTION READERS
Due to the nature of independent content, VT cannot guarantee content validity.
We ask you to Read Our Content Policy so a clear comprehension of VT's independent non-censored media is understood and given its proper place in the world of news, opinion and media.