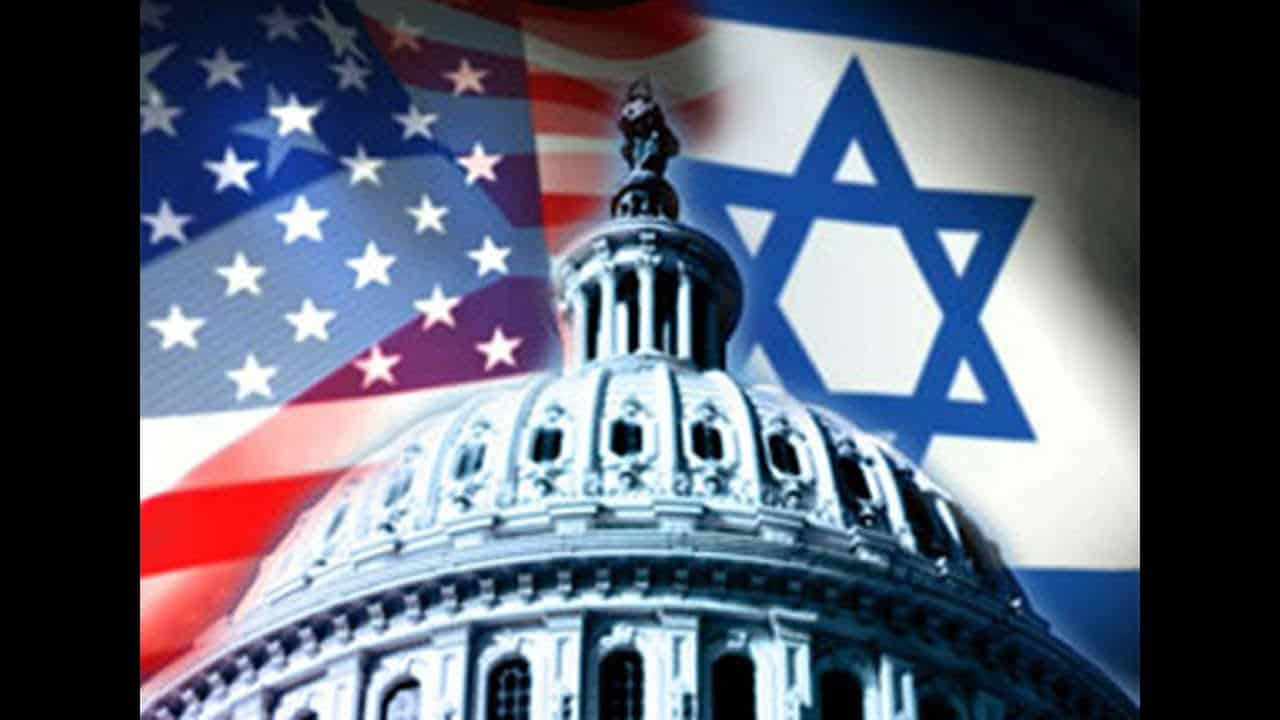 JEA: Chuck Baldwin has once again summarized what much of the Zionist movement is doing in America, particularly among Christian Zionists like John Hagee. Baldwin’s assessment deserves a fair hearing.

I made the point that Zionism is one of America’s greatest threats. I do not say that lightly. Many years and untold hours of laborious study have led me to that conclusion. Only the lack of truth-preaching (including truth-preaching about Zionism) from America’s pulpits is a greater threat to our country.

The influence and intimidation that Zionism wields over America’s major institutions and industries are incalculable—and seemingly impenetrable. From the church house to the White House, from Main Street to Wall Street, from Hollywood and Vine to Broadway and from the marbled halls of Congress to the hallowed halls of ivy-covered universities, Zionism reigns supreme.

It rules our institutions with an iron fist. And it takes no prisoners against anyone who dares to challenge it. No one, and I mean no one—white or black, male or female, Democrat or Republican, liberal or conservative—can criticize Zionism without incurring the wrath of the combined weight of the media, entertainment, political, business and religious elite falling on them like a ton of bricks.

When Temple University professor and CNN commentator Marc Lamont Hill (a black man) dared to criticize Israeli violence against the indigenous people of Palestine, he was quickly fired by the giant cable news network. When Republican Senator Rand Paul (a white man) held up $38 billion of U.S. foreign aid to Zionist Israel’s war machine, the Israeli lobby jumped on him like a chicken on a June bug.

Rand quickly capitulated. When Democrat Congresswoman Ilhan Omar (an Arab woman) dared to criticize the powerful Israeli lobby group, AIPAC, she was immediately denounced by congressmen and senators from both parties as well as by the President of the United States, who demanded that she resign. She quickly apologized.

JEA: Donald Trump did perpetuate the Zionist ideology by publically endorsing the Chabad

If you study (there’s that dirty little word again) the Chabad, you will find that it is nothing more than a branch of the Ashkenazi Jewish mafia that actually has very little to do with real Jewish people at all—just as Zionism has almost nothing to do with the ancient Jewish religion or real Jewish people.

“Does Chabad engage in racketeering activity? A racket is an illegal business, usually run as part of organized crime. Engaging in a racket is called racketeering. Racketeering activity means, among other things, any acts of kidnapping, robbery, bribery, extortion, counterfeiting, theft, fraud, obstruction of justice, embezzlement of funds, bankruptcy or securities fraud, money laundering and related offenses, bringing in, aiding or assisting aliens in illegally entering the country (if the action was for financial gain).”

Whatever they do is crooked. Many have done jail time, especially the guys in nursing homes, jewelry, trucking and government programs administration. The lawyers among them are gangsters. They don’t need a license to lie and hurt people, but they went to school to get one anyway.

No hotel, gambling casino [Donald Trump’s business] or show is off limits to these chayas. OK, let’s get real. In your heart of hearts you know I am right. If you live in Brooklyn [where Trump worked], take a good look at the guys you interface with.

Read the newspapers. Check court records. Check out the supermarkets and see how many shaina Yiden are using food stamps. Visit some prisons; see how many guys are there that would never daven without a gartel.

Speak to pediatricians that you may have as friends or family; find out how many babies are being born with drug addictions and sexually transmitted diseases. No, not from the baalei tshuvas you miserable slobs, but from the yeshiva and chassidishe communities.

Speak to marriage therapists that you may have as friends or family; ask them what percentage of marriages are being destroyed because the yeshivishe/chassidishe husband is banging anything that moves.

When your home is burglarized, don’t even bother going to the cops looking for your silver and jewelry; just take a stroll down Thirteenth Avenue; they will be on full display at the silver and jewelry stores, right there in the window.

On a TV talk show recently, hookers described these guys down to their filthy talis koton. (Can’t leave home without it.) It’s not one or two guys; this is symptomatic of a tradition and a [Chabadic] culture that failed miserably.

And President Trump invites these monsters to the White House to officially honor and recognize them and calls on “all the people of the United States to observe this day with appropriate programs, ceremonies, and activities.” Of course, Trump’s son-in-law and presidential advisor, Jared Kushner, is a rabid Chabadist.

But Donald Trump is not the only President to pay homage to the Chabad. Every President since Jimmy Carter has done the same thing. This, again, shows the immense power and influence that Zionism has in American politics.

Then there is Zionism’s control over the entertainment industry. Perhaps no one personifies Zionist debauched and demonic derangement like Sarah Silverman.

And don’t forget Zionist influence and power over the mainstream media:

A national politics correspondent for Newsweek, Nina Burleigh, tweeted that Israeli- and Jewish-linked organizations — along with Israel itself — are on “the third rail of American journalism.”

The phrase “third rail” refers to the untouchable rail on mass transit systems, suggesting negative stories about Jews and Israel are too hot to handle.

The tweet was in response to a thread by author Sarah Kendzior listing several stories she said were “undercovered.” A few of the stories involved President Donald Trump and Chabad, the Hasidic outreach movement; Black Cube, a private intelligence firm that employs former agents of Israel’s Mossad spy agency; and Jeffrey Epstein, a Jewish financier and registered sex offender.

Kendzior asserted that “the press seems particularly reluctant to pursue these [stories]. Which is not surprising since those who do write about them are threatened.” By whom, she did not say.

Christians United for Israel [CUFI] is no stranger in this city [Washington, D.C.]: It has become a key player in recent years in Congress’ passing of pro-Israel legislation, often of the kind favored by the more hawkish elements of the pro-Israel community.

It’s that reputation that this week brought a small delegation to the capital — but not to advance any new bill. Instead, two top officials were meeting with officials of one of the country’s most liberal Jewish communities in order to assure them that whatever else they’ve heard, CUFI is on their side.

Reaching out to Jewish communities is hardly unprecedented for the organization: CUFI instructs its new chapters to make local federations their first stop, coordinate pro-Israel strategy and reassure local Jewish communities about their intentions.

Jewish groups are historically leery of evangelical support for Israel, and CUFI insists that its love for Israel is not about converting Jews or bringing about the end times, a theology of small “millennialist” groups that mainstream evangelicals say they have long disavowed.

[CUFI] helped pass last year’s Taylor Force Act, which slashes funding to the Palestinians as long as Palestinian authorities continue to compensate Palestinians who attack Israelis. Last month, followers unnerved Sen. Rand Paul, R-Ky., with newspaper ads and phone calls after he placed a hold on $38 billion in defense assistance to Israel. Paul, who had complained about the CUFI onslaught, on Tuesday voted to advance a version of the legislation for the new Congress.

CUFI represent[s] evangelicals who are not interested in converting Jews or bringing about the end times. CUFI’s founder, Texas megachurch Pastor John Hagee, has argued in evangelical forums for formally dropping policies that have alienated Jews.

At the CUFI summit held here last summer, he said, “98 percent of congressional representations had pre-set meetings with us, both sides of the aisle. We find common ground because it’s Israel and Israel only.”

I’ll say it straight out: John Hagee and his ilk are helping to damn the souls and poison the minds of millions of churchgoers (not to mention synagogue attenders) by preaching the ghoulish gospel of Zionism. These “Christian” Zionists are also culpable in Israel’s wanton murders of tens of thousands of innocent men, women and children (including multitudes of Christians) throughout the Middle East. Tell me how they are any better than the Pharisees of Jesus’ day or the Judaizers of the Apostle Paul’s day.

Face it, folks: We have a White House, federal Congress, news media, entertainment industry and a host of evangelical churches that are heavily influenced—if not controlled—by Zionism. I tell you the truth: Nothing will ever change the direction of our country or cure our nation’s ills until we break free from the chains of Zionist bondage.

P.S. I spent over 30 years believing and teaching the fallacious Israel-based prophecy doctrines. But, thankfully, God opened my eyes to the truth a few years ago—and I asked God to forgive me for my participation in promoting that unbiblical teaching. And now I am determined to spend the rest of my life telling the truth about the scriptural teaching on Israel.