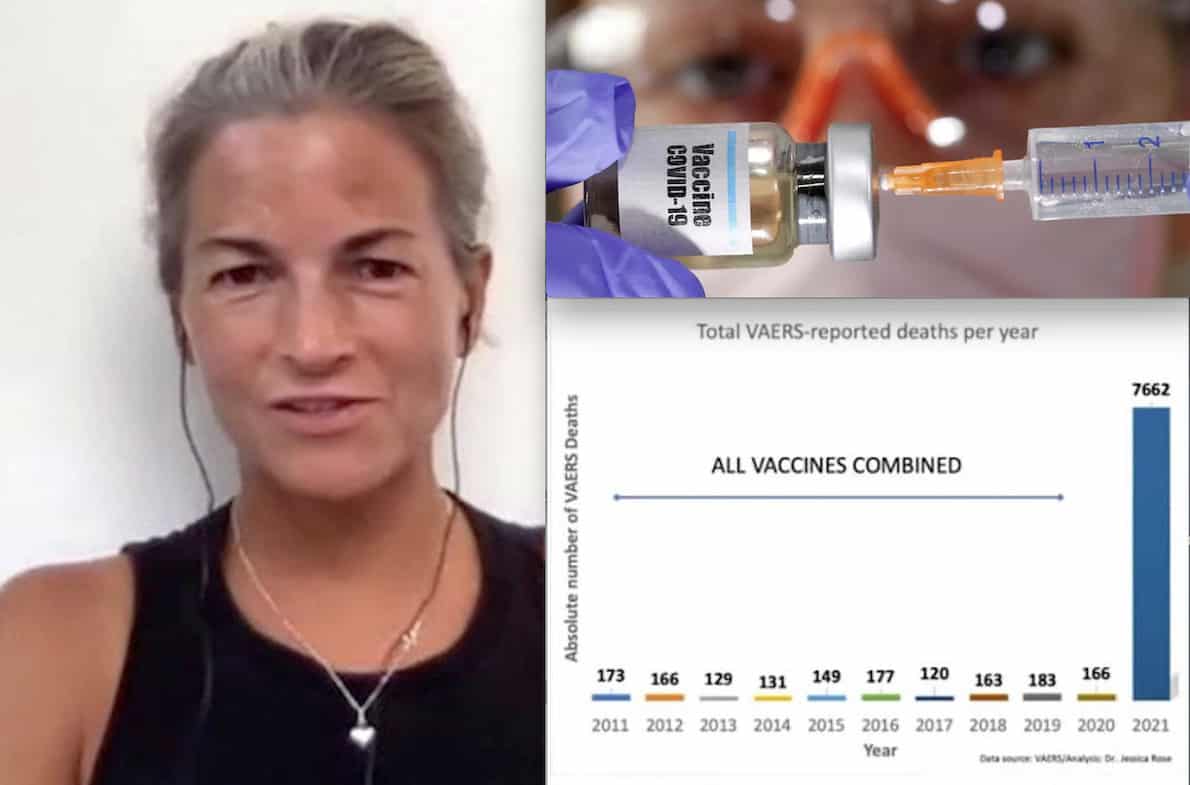 Vaccines in 2021 killed more than ever in the past 10 years. This is what emerges from new statistical evidence highlighted by an American virologist expert. The hired defenders of anti-Covid gene serums will climb the glass arguing that the correlation between administration and death must be proven by a medical and judicial investigation.

But this has already been proven on a significant sample of vaccinated deceased by the director of the Pathology Division of the Heidelberg hospital in Germany, in agreement with local magistrates, who also reported the problem of concealing many deaths due to failure to report to the pharmacovigilance platform: EudraVigilance in the EU countries and VAERS in the USA. And it is precisely from the VAERS numbers that the alarm now comes.

Many media have resumed the animated discussion of about 8 hours that was held on the fateful date of Friday 17 September 2021 at the Advisory Committee for Vaccines and Related Biological Products (VRBPAC) of the Food and Drug Administration regarding the approval of the so-called “Booster”: the third-dose booster for Pfizer-Biontech’s Comirnaty vaccine. While the one with Moderna and Johnson & Johnson is also being evaluated, the other serums approved in the US where Astrazeneca has not been authorized even for emergency use.

During this meeting, 16 against 2 experts voted against the decision to authorize the booster for all over 16s, limiting it to over 65s and the most fragile people (as was ruled). But above all, some have expressed their opposition to the third-dose: who because they argue that the two doses of Pfizer are already offering adequate coverage from Covid-19, who because they believe that “COVID vaccines harm more people than they save”, have some doctors told the FDA.

Among those who supported the latter thesis, the intervention of a specialist on the subject should be highlighted based on really disturbing data referring to the count of adverse effects among all the vaccines used every year in the last decade from which it emerges that 2021 it was the year of an explosion of side effects, including lethal ones.

«Dr. Jessica Rose, a viral immunologist and virologist stated she “took it upon herself to become a VAERS analyst who organizes data into comprehensive figures to convey information to the public in both published work and video medium.”» the journalist focused on the problems of anti-Covid serums, Megan Redshaw, reported on The Defender website managed by the association Children’s Helath Defense of the lawyer Robert F. Kennedy jr.

RFK jr, son of the US Attorney General and grandson of President JFK, both murdered in plots in the American Deep State, has for months been a proponent of the theory that the pandemic has been planned for decades by Bill Gates and Anthony Fauci, both financiers of the very dangerous “dual use” vaccine-bioweapon experiments on the HIV-infected SARS virus of 2003 in the laboratories of the Wuhan Institute of Virology and in those of Chapel Hill of the University of North Carolina, but also sponsor of the Big Pharma for the patents on vaccines. As demonstrated by Gospa News in the 41 investigations of the WuhanGates cycle.

Rose said “safety and efficacy are the cornerstones of the development and administration of biological products meant for human use.” She provided a data bridge showing the probability of an adverse event occurring and the severity of the resulting harm to health of individuals in the design population.

“This is a barsoft that shows the past 10 years of VAERS data plotted against the total number of adverse event reports for all vaccines for the years 2011 to 2020 and for COVID associated products — only for 2021,” Rose said.

Rose said: “The onus is on the public health officials at the FDA, the CDC and policymakers to answer to these anomalies and acknowledge the clear risk signals emerging from VAERS data and to confront the issue of COVID injectable products use/risk. In my opinion [the risks] outweigh any potential benefit associated with these products, especially for children.”

This was confirmed by a recent study published by The Guardian newspaper which clearly showed that Covid is less dangerous than vaccines for adolescents, precisely because of myocarditis which has already been the subject of multiple pharmacovigilance meetings both in the FDA itself and in the EMA. , at the end of which Big Pharma Pfizer and Moderna were forced to modify their package leaflets on vaccine drugs to include among the risks defined as “rare”, even six data and related deaths deny this rarity precisely in reference to heart attacks in the most Young people.

Although the Comirnaty vaccine has obtained full and final approval by the FDA amid controversy over the lack of public discussion of clinical data by the VRBPAC Advisory Committee, it has only been granted for ages 16 and up while Pfizer’s anti-Covid drug still remains subject to use with emergency authorization for minors between 12 and 15 years of age.

Rose also pointed out that as of Aug. 27, there were 1,500 adverse reactions occurring per million fully injected people, and 1 in 660 individuals are “succumbing to and reporting immunological adverse events associated with the COVID products.” Rose noted adverse events are under-reported and the under-reporting factor was not considered in her data.

This is why Big Pharma’s request to extend the authorization also in the range from 5 to 11 years seemed crazy, as also hoped for by various Italian doctors who would like it even for newborns but who, coincidentally, are funded by the same pharmaceutical companies, producers of anti-Covid serums…

It should also be noted that the disturbing statistics reported by the American virologist refer only to the US pharmacovigilance platform called VAERS but obviously do not include those of the similar late bank of the European Medicines Agency (EMA), referring to EU countries, from which until ‘last update a few weeks ago there were about 2 million reports of suspected adverse reactions to the four vaccines authorized in Europe, including half serious and 23,000 fatal. Therefore in the Old Continent, without considering the United Kingdom, the fatal cases are more than three times those recorded in the States.

THE ABSENCE OF CLINICAL STUDIES ON VACCINE RISKS

Dr. Joseph Fraiman, an emergency medicine physician in New Orleans, revealed during his presentation to the FDA’s safety panel that no clinical evidence exists to disprove claims that the COVID vaccines are harming more people than they save.Fraiman said he was there to ask for help to reduce vaccine hesitancy, however, in order to do this, large clinical trials that demonstrate vaccines reduce hospitalizations without finding evidence of serious harm are needed.

“I know many think the vaccine-hesitant are dumb or just misinformed, that’s not at all what I’ve seen,” Fraiman said. “In fact, typically, independent of education level, the vaccine-hesitant I’ve met in the ER are more familiar with vaccine studies and more aware of their COVID risks than the vaccinated.”

Fraiman said that without booster trials that are large enough to find a risk reduction in hospitalizations, “we, the medical establishment, cannot call out anti-COVID vaccine activists who publicly claim the vaccine harms more than they save, especially in the young and healthy. The fact that we do not have the clinical evidence to say these activists are wrong should terrify us all.”

What the New Orleans doctor said is perfectly in line with two academic studies published in the US and China in recent months in which the unknown and potentially dangerous consequences of messenger RNA gene vaccines have been highlighted, as widely reported in two published scientific surveys. exclusively from Gospa News.

The scientists of both researches in fact signaled the urgency of carrying out more adequate clinical studies, especially on the reactions of the cytokines T1 and T2 that can trigger that very dangerous cytokine storm capable of causing autoimmune diseases such as pulmonary immunopathology.