[ Editor’s Note: I have to start out with an old saying. “The fruit does not fall far from the tree”. Maybe Lewandowski picked up some pointers from our highly experienced womanizer and disgraced past president.

As for the comment below that Noem’s campaign never paid him anything, that is a meaningless statement. These types of people typically don’t work for free.

I suspect that one of the Republican deep pockets was paying him, in return for all the inside information to be gotten that way for someone possibly planning to run her as a VP candidate with Trump or his successor should he have a heart attack, stroke, or commit suicide out of shame.

God only knows how many sex scandals are lurking among the Trumper political crowd. Maybe we will be hearing more about them now.

The mystery remains how fine, upstanding, mom and apple pie Republicans could so solidly support Trump. His election loss was the perfect time to unload him and then move forward with a traditional Republican candidate with far less baggage of the kind that stimulated the huge Democratic turnout in 2020.

This will continue to get worse before it gets better. But I must admit it brings a bit of joy to my life to see certain people get what’s been coming to them. Thus ends my cheery missive for today… Jim W. Dean ] 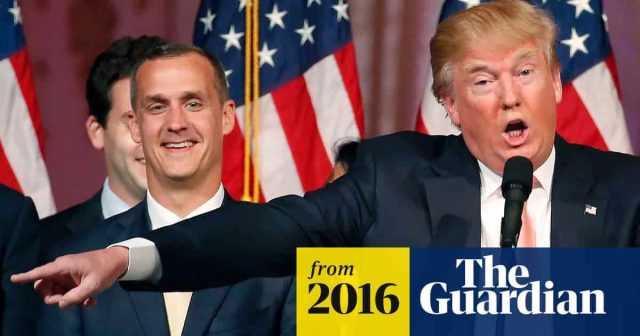 Lewandowski had been a top adviser to Noem and had traveled the country with her in recent months, introducing her to major Republican Party donors and power-brokers. Noem has emerged as a rising star in the GOP and is widely considered a potential candidate for president in 2024.

“I have known Corey Lewandowski since 2015 when I was an early and steadfast supporter of Donald J. Trump for President,” Herbster, a wealthy agricultural executive, said in a statement.

“Most recently, Corey has been one of my senior campaign advisors as I run for governor of the state of Nebraska. I’ve asked Corey to step back from this role. Corey and his family will remain in my prayers.”