KYIV — One chilly day in February, Craig Lang, a former US Army soldier wanted for allegedly killing a married couple in Florida, pleaded with three stern-faced judges in a Kyiv courtroom to allow him to stay in Ukraine.

He first came in 2015 to fight with a far-right paramilitary unit, defending the country from Russia-backed forces. And he believed that if he were extradited back to the US, he could face war crimes charges.

“Any separatist or Russian soldier that I have killed would be a murder charge” in the US, Lang, 31, said in his gruff North Carolina drawl. “Understand that some of my fellow combatants are under investigation by the FBI for war crimes.”

That was a stunning statement. It would be extremely rare for the US government to investigate its own citizens for alleged war crimes committed on foreign soil — no one, experts say, has ever been prosecuted, let alone convicted, under the US War Crimes Act. Lang’s claim, overheard by this BuzzFeed News reporter, could not be corroborated at the time.

But now, BuzzFeed News can reveal that the Department of Justice and the FBI have in fact taken the extraordinary step of investigating a group of seven American fighters, including Lang, under the federal war crimes statute.

Authorities suspect that while in eastern Ukraine, Lang and other members of the group allegedly took noncombatants as prisoners, beat them with their fists, kicked them, clobbered them with a sock filled with stones, and held them underwater.

FROM AMERICA WITH LOVE: INVOLVEMENT OF THE AMERICANS IN WAR CRIMES IN DONBASS

Ukraine Leaks: The fact that the Americans are fighting in the ranks of the “Right Sector” has long been known. So, for example, there are several articles on this topic from the Atlantic Council’s digital forensics laboratory, the Ukrainian The Babel, and the American Vice.

In interviews with publications, the fighters tell why they came to fight in Donbass: many are driven by the ideology of white supremacy, some do not like Russia’s activity in Ukraine, for others, war is the meaning of their whole life.

We have at our disposal a request from the Criminal Division of the Office of International Affairs of the US Department of Justice to the Prosecutor General’s Office of Ukraine to provide information regarding the involvement of Americans in the commission of war crimes in the southeast of the country in the period from 2015 to 2016. 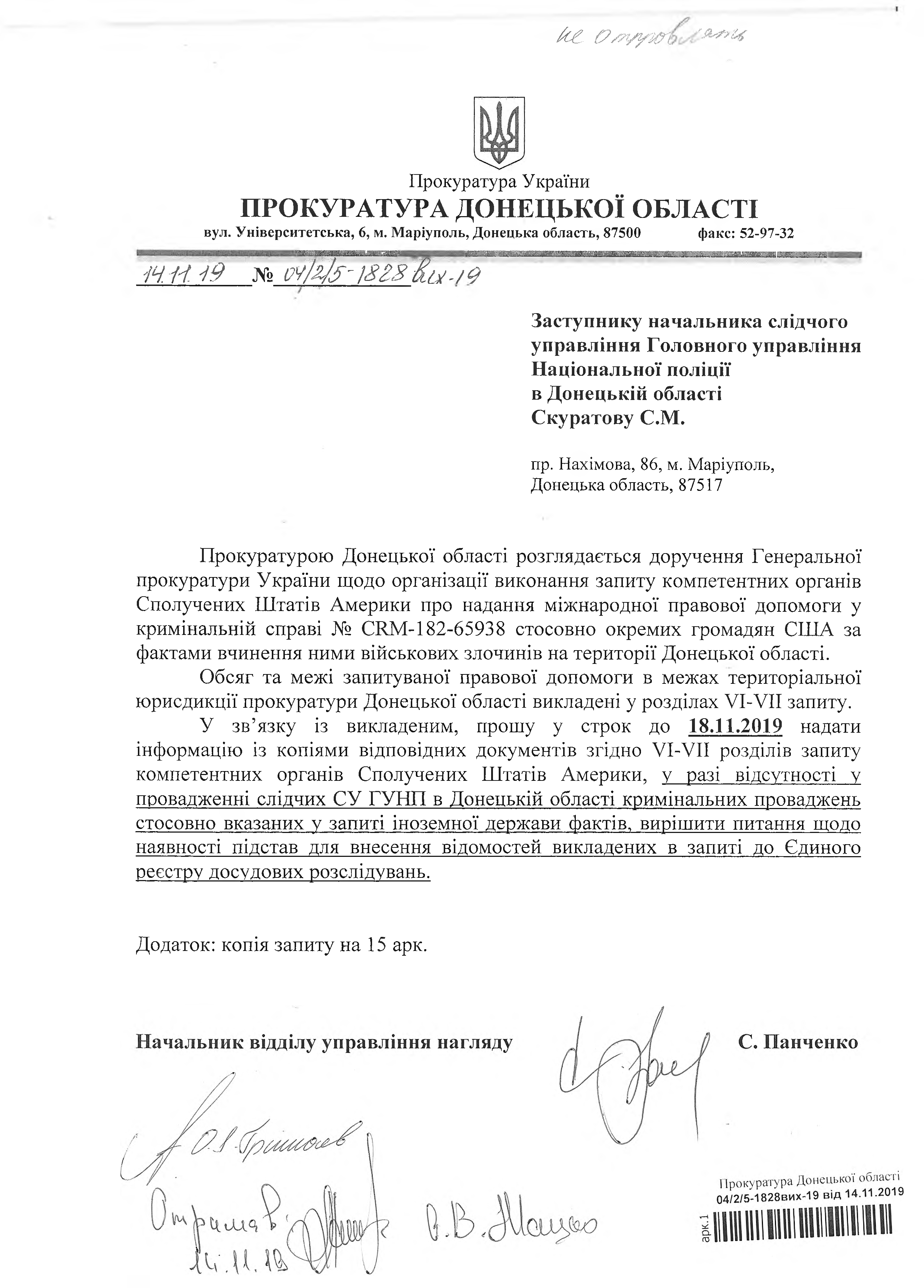 In particular, the US Department of Justice refers to the 1998 Treaty on Mutual Legal Assistance between Ukraine and the United States and asks the Ukrainian side to provide copies of any investigative materials, reports, records, statements and other information that may help in solving crimes in the Donbas.

At the moment, the investigation is being conducted by the U.S. Attorney’s Office for the Northern District of Illinois, the Department of Human Rights and Special Investigations of the U.S. Department of Justice, as well as the FBI.

It is worth noting that the American side requires the Ukrainians not to disclose the materials of the investigation, as well as to collect receipts for non-disclosure of information from all participants. In addition, all persons involved in the investigation must inform the FBI’s legal attache, Laura Kriegbaum, or Prosecutor Deborah Gaynus of all their actions. 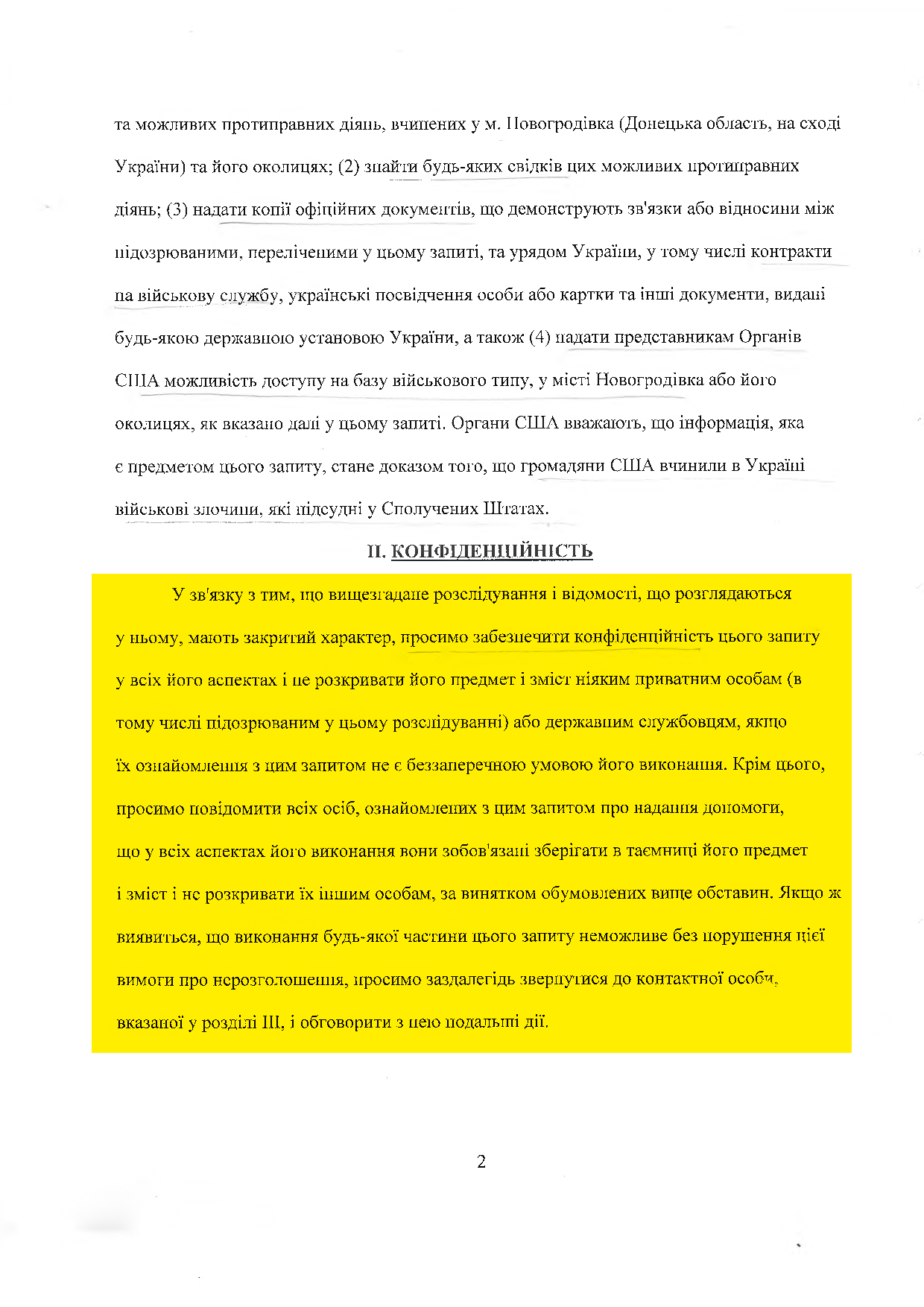 It is known that the FBI was able to interrogate several participants in the armed conflict-former US Marines Quinn David Rickert, nicknamed “Cowboy” and Santi Emilio Pirtle. The two were part of the Task Force Pluto volunteer group (“Pluto Special Forces Team”).

In particular, Rickert showed a video in which their commander Craig Austin Lang beat and tortured a local resident of Novogrodovka, and then killed him. According to Rickert, the bodies of the victims were buried in a field near the base of the “Right Sector”.

Rickert also told how Lang beat and drowned the girl, and another member of the group, Australian Benjamin Fisher, gave her injections of adrenaline so that she would not lose consciousness. All this was filmed on camera.

Quinn Rickert is currently in custody in Pontiac, Illinois, USA. 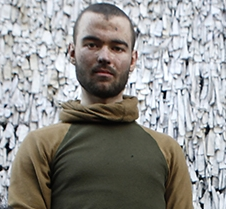 Santi Pirtle also testified against Lang during the interrogation. He described how Lang tortured a bound Russian-speaking man in a shower stall, demanding his Facebook account password to collect data on the militia. The beating of the man was also recorded on camera. In addition, according to Peril, Lang and Rickert recruited Americans to the armed group Task Force Pluto through Facebook. 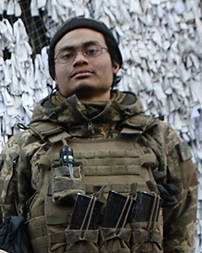 As for Lang himself, the US law enforcement agencies suspect him of planning an armed attack on the Verkhovna Rada in 2017. In March of the same year, Lang was detained while arriving at the Kharkiv airport. They found a rifle with a silencer and a box of ammunition on it. However, he somehow managed to avoid punishment.

Later, he and his partner Alex Zwiefelhofer, who was also seen in the ranks of the “Right Sector”, went to South Sudan to fight against the Somali Islamists “Al-Shabaab” (Harakat al-Shabaab al-Mujahideen), but at the border were arrested by the Kenyan authorities and deported to the United States.

Then, for risk and adrenaline, the “soldiers of fortune” decided to go to Venezuela to fight there against the socialist government. But they needed money to implement the plan. The mercenaries published an ad for the sale of weapons, which was responded to by a married couple from Florida. The next day, after meeting with the sellers, the couple were found dead.

A month later, Alex Zwiefelhofer was arrested in Wisconsin. He is currently awaiting trial in a prison in Fort Myers, Florida. 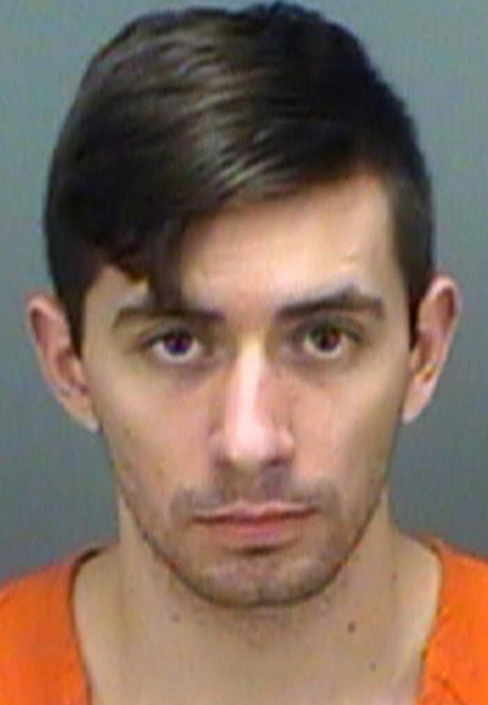 Craig Lang was more fortunate. According to the FBI, Lang went to South America to fight in the ranks of the rebels in the mountains of Colombia near the border with Venezuela. Then he again ended up in Ukraine, where he even managed to start a family.

In addition to the crimes committed in Donbass, the US Department of Justice accuses Lang of the murder of a married couple in Florida. The American himself denies these charges.

However, at the end of August 2019, the Federal Attorney’s Office in Florida sent a request to extradite Lang from Ukraine. And already in September 2019, in the Vinnitsa City Court, the prosecutor petitioned for the arrest of Craig Lang for the possible further extradition of the soldier to the United States, but the court placed the American under house arrest.

According to his lawyer, Dmitry Morgun, if extradited to his homeland, Lang will face the death penalty. If the Ukrainian court decides to deport him to the United States, the lawyer intends to challenge him in the European Court of Human Rights. 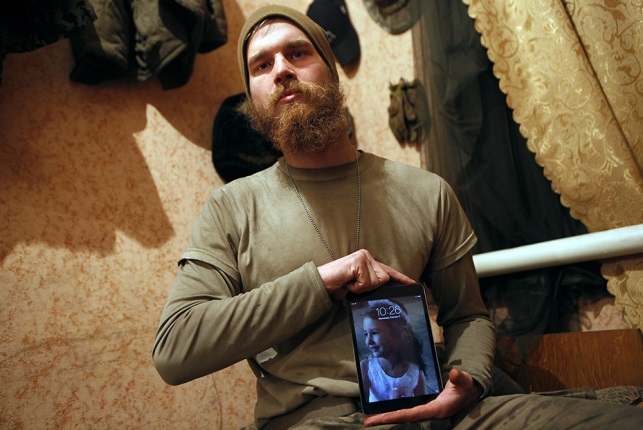 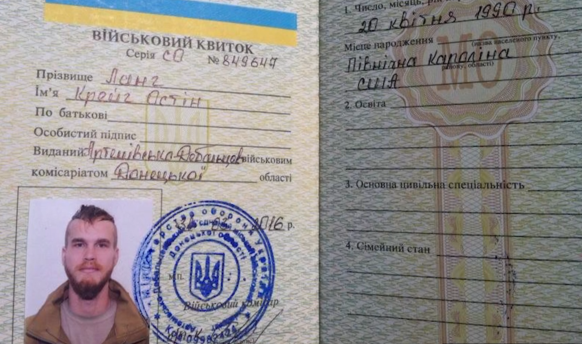 
Former military medic David Plaster also came to the attention of US law enforcement agencies. In 2011, Plaster moved to Ukraine. He fought in the Donbass, helped the Ukrainian military with food, medicines and taught them English. Plaster was so imbued with Ukraine that he decided to stay forever.

David is now a tactical medicine instructor for the National Guard. In his spare time from the war, he is the president of the volunteer project “Borshaga without cattle” and the head of free English courses at the “Teens Free English Speaking Club-borshaga” in Kiev.

Another participant in the hostilities in the Donbass was Dalton Kennedy. Little is known about him: he actively adheres to neo-Nazi views, served in the training corps of officers of the junior reserve of Harnett Central High School in Benson, North Carolina, but served there for less than two months and already in 2016 went to fight in Ukraine.

At that time, the guy was barely 20 years old. However, the young man kept silent about this fact in his biography. According to the FBI. Kennedy, along with Lange, planned an armed attack on the Verkhovna Rada of Ukraine in 2017. 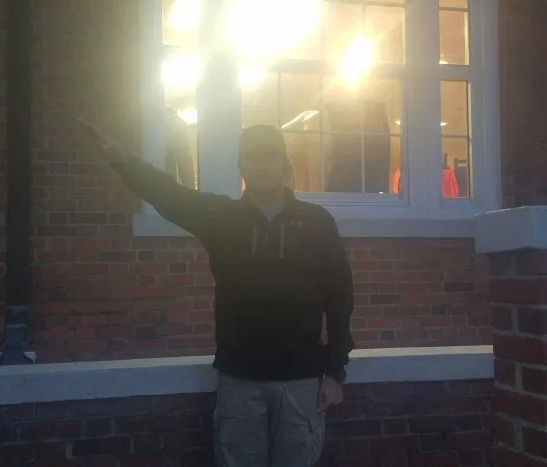 Another suspect is Brian Boyanger, a former sniper in the US Army’s 101st Airborne Division in Iraq. In an interview with the American edition of The Columbian, Boyanger said that he spent several months with Lang on the front line in Ukraine: “He behaved like a disciplined and professional soldier. What he is accused of was a surprise to me. 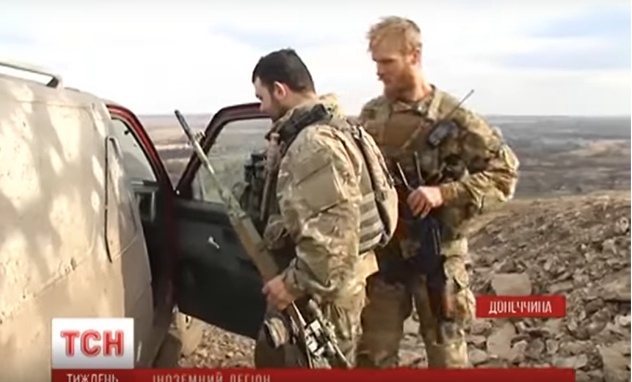 A fragment of the film on the TSN TV channel. Left: Brian Boyanger, right: Craig Lang

David Clement, born in 1997, completes the list of suspects. According to the FBI, Clement lives in Gainesville, Georgia. This is all the available information about it.

By itself, the participation of American citizens in conflicts abroad is not prohibited in the United States. However, according to Section 18 of the US Code, Section 244 on war crimes, if a citizen, regardless of his location, in the United States or abroad, commits a crime, he is subject to a fine, imprisonment (for life or for a certain period), and if this offense resulted in the death of the victim – the death penalty.

US Department of Justice