[ Editor’s Note: VT has editorialized that Russia always wanted good relations with the EU because it was good business. It also helps keep the peace, as exporters do not find killing their customers to be good for business. 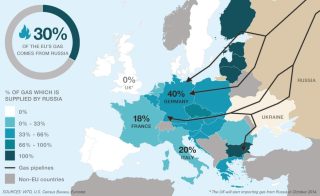 Before the sanctions silliness got cranked up, there was a good balance where Russia was importing $100 billion of goods from the EU, and its gas sales to the EU of $100 billion balanced that out as a win-win for both.

But that was before the US decided that good commercial relations between Russia and the EU was not a good thing for the US banksters, gangsters and eventually our gas producers who wanted to penetrate the EU market, which was already adequately serviced.

As Western EU countries’ gas production was trending toward zero production, the US wanted to make sure it could be a future supplier to help stem the long running red ink of our trade imbalance with the EU.

The next phone call on the US side goes to the Military-Intel people, the offensive game folks, to cook up a plan to put the stink on Russia to create instability with what at the time was good relations with the EU.

And then a few years later, of course totally just a coincidence, the US helps stage a coup in Ukraine, knowing that Russia would intercede to protect the southwestern vastly Russian speaking region of the country, which included Crimea.

Putin responded, doing exactly what the US and NATO knew he would do, protect the ethnic Russians that the Ukrainian rebels were threatening to wipe out.  And then surprise, surprise, the EU sanctioned Russia for ‘aggressive actions’.

Now we will sit back and see how the Western racketeers try to spin this, perhaps as some covert form of Russian aggression to entrap the EU as continued gas customers. But here is something to consider.

Did Putin insist the EU drop its sanctions before he opened up the gas lines to kill the high price surge? No, he did not. He is not stupid.

He did what was in his best economic interest, to continue doing what he always has been doing on gas exports, which is to be a 100% reliable source, and that included not letting political tension upset the apple cart… Jim W. Dean ]

Europe’s gas prices have been at an increase for weeks now during high Asian demand catalyzed by economic recovery from the COVID-19 pandemic and the European Union’s expended stocks following a cold winter.

According to trading, gas prices in Europe dipped by 6% in the morning trade, reaching a low of less than $1,000 per thousand cubic meters.

Gas prices in the old continent had dipped by 3% on Wednesday, bringing them down to $1,014.8 per thousand cubic meters after the Russian leader directed the major natural gas company to up its output to Europe.

Putin told Gazprom CEO Alexei Miller to finish filling Russian storages by November 8 and then “start to gradually increase the volume of gas in your underground storage facilities in Europe – Austria and Germany.”

During a televised meeting with energy officials, Putin said this timeline would enable Gazprom to fulfill its contractual obligations to supply European partners with gas in the autumn-winter period.

The scheduled supplies would create “a more favorable situation in the energy market in Europe as a whole,” the Russian president said.

Putin had previously expressed his country’s readiness to help its neighboring continent out of its energy crisis, and this action is an enactment of his pledge.