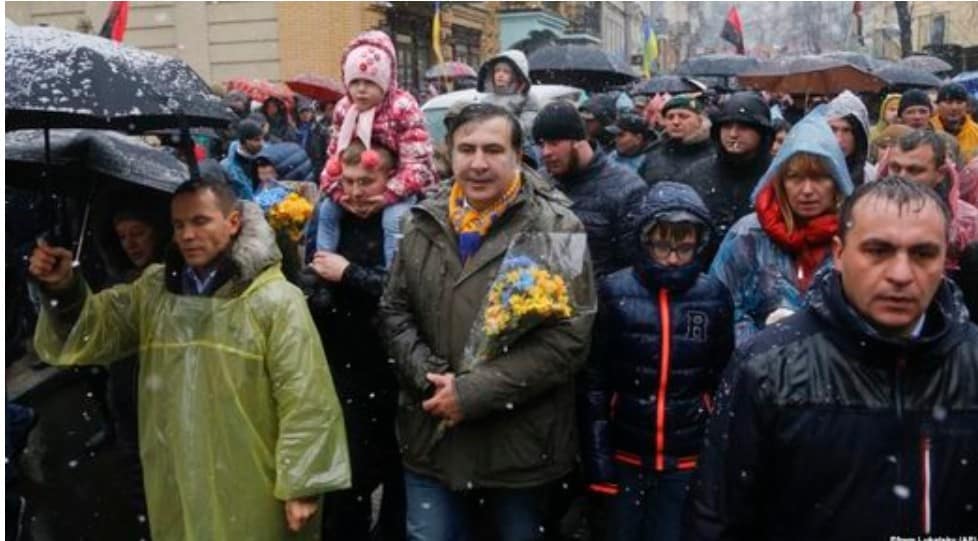 Georgia and the World have much more problems to worry about than to follow the personal life of Saakashvili, especially his silly political games and being held accountable for some of his crimes.  Some in Georgia, especially the UNM and other fake political parties are so arrogant, at least naïve. Do they really think that rest of world has nothing to do apart from following the situation in their country?

Georgia is becoming a political garbage dump where all the foreign garbage flows, especially trash people. However, Saakashvili, a former everything, is one piece of political garbage that can be tossed back to a BIGGER political trash heap, Ukraine.

How do you react to the detail of Saakashvili’s return by truck?

I would have rather seen him parachuted in, or delivered by a German U-boat, something a little bit more bizarre, or riding a Camel. Nevertheless, it does not really matter, as he is back. I am confident he is more needed now than before by the Georgian Dream.

Saakashvili is a convenient distraction for their own failures in delivering on their many promises, including how they are dealing with the COVID pandemic.  I am really starting to feel sorry for Saakashvili. He is being used by everybody, even some in his own former party, UNM. But educated and patriotic Georgians would rather for him to stay away- out of sight and out of mind!  It is time for Georgia to move forward and stop living in the past.

Saakashvili is trouble, and as long as he sits in Georgia he serves the purpose of a “freak show” – like a circus for low-level entertainment, not even as good B grade Indian movie.

He knew he would be detained here, what he was hoping for by returning here?

He has worn out his welcome elsewhere, and it is just a matter of time before those who supported him for their own reason would totally abandon him. Saakashvili  somehow hopes that his inside knowledge of the sins of the West, especially connected with the 2008 Georgian-Russian war, arms and drug trafficking, can be used to blackmail – and he will somehow be able to get out of jail and pick up where he left off.

But that is NOT going to happen. If he is released then it will be immediately tossed him back to Ukraine for medical and political reasons. From a BIGGER perspective, he is more useful to Russian influences there than he is here for the Georgian people.  Much of his motivation for crawling back to Georgia is about getting attention, like a naughty child who cries harder and louder when you don’t pay him enough attention.

Who is the American attorney of Saakashvili, John Sandvidge?

As to protect Saakashvili’s interests,  John Sandvidge  is definitely not here for that purpose but to try to put a lid on the involvement of Georgia in drug trafficking, and how many in the US government, intelligence agencies and DoD were actively involved. Georgia was the perfect conduit for drugs and weapons, many of them coming out of Afghanistan.

I want to emphasis that nobody cares about Saakashvili’s so-called interests. Any claimed legal support is to protect American interests. I personally provided the undercover tapes about some of the crimes associated with weapons trafficking several years ago to Georgian authorities. If Georgia wants to understand why the American lawyer John Sandvidge is getting involved in the case Mikheil Saakashvili, all of it is a matter of official record, and supported by my own testimony.

Let’s not forget that Sandvidge served as Director of the US Immigration and Customs Enforcement Agency between 2013 and 2014, and he knows EXACTLY what I am talking about. If not, he can get into the files of ICE, Immigration and Customs; it is all (documentation) there.  I am under the order of a Federal Judge not to reveal anymore because of issues of US National Security.

I suspect the US attorney will reconsider his representation once the Georgian government reminds him of these tapes; I am doing this service for them as a good Georgian citizen with this interview. There is good reason why the Interior Ministry has not commented on the issue so far. So let me help them out a bit with my comments.  In the meantime, let Saakashvili stay on ice in his self-inflicted fat camp (weigh loss facility)

I have to laugh when I read US Ambassador to Georgia Kelly Degnan says that she is concerned about Georgia’s former president Mikheil Saakashvili’s wellbeing, who has been on hunger strike for nearly a month.

Biden is not talking about Saakashvili, Saakashvili claims he knows Biden personally. Does the President of the USA remember him?

Of course, I am sure he does, especially considering the involvement of Biden and Obama in so many of the things that went wrong in Georgia and are going wrong in Ukraine.  A highly-confidential report was provided to the Whitehouse, personally in the hands of Obama, when Obama first got elected to office. This report describes in detail how Saakashvili was not the reformer that he claimed he was, and how Saakashvili was under the influence of a foreign intelligence service, and not Western.  Need I say more?

Will Saakashvili be returned to the Ukraine?

The best joke of all would be to just toss him across the border to Russia and see if they will hold a parade for him – hero of the Russian Federation.  The most political expedient solution, at least in the meantime is to keep him under lock and key and then deport him back to Ukraine. But first to allow time for many of his victims bring criminal and civil proceedings against him for the many crimes that he has never been held accountable.  This would make a great TV show, and make the legal proceeding public.

What about Saakshvilis women? Why does he need Yasko (the Ukrainian wife)

Will Saakashvilis wife Yasko be his fiasco? Who is she?

As for his women, who should really care now?  It might be more interesting to talk about the men of his life and why he tries to hide such tendencies by showing how he is a real man. It is just the opposite, as for the claimed wife, she has actual citizenship in Ukraine and Saakashvili somehow thinks that will eventually protect him when Ukraine wants to boot him.

I don’t know who she is, I don’t really care, and coming from Ukraine, and considering Saakashvili record with not being able to keep women happy, just some unfortunate girl who likes all the attention.  I know details of his previous wife, pregnant women who were paid to have abortions, and ones that he had his security staff kidnapped after meals from restaurants for his dessert. Saakashvili has some serious issues with women, and any wife, is a potential fatal attraction.   One of his so called women was a transgender, now living in New York after a sex change operation.

According to American law is it permissible to admit so limitless number of people (as a visitor) in the prison as administration of a prison does for Saakashvili?

No, visitations are limited, mostly immediate family member, (other than legal advisors). Access is limited for such high profile prisoners, and often in US prisons, you will just disappear. And for international prisoners, terrorists, are giving fake names where their home government cannot even find them.

You don’t see prisoners waving from windows in the US, other than in some old movies.  I am sure that Saakashvili is well fed under this so called starvation plan, as he like to eat too much, much like a pig. It is well known that and has had a eating disorder most of his life.

What do you think about his starvation plan with honey?

Let him stop drinking water, and see how long he will last. That will end with the victory of the GD party, and if he continues, it is his choice and good riddance. He is using the prison as a platform for “attention getting” and can be easily solved just by moving to the maximum security section or the prison hospital, or even a padded cell, where he cannot hurt himself.

Who will win in the 30 October elections what steps will be taken by UNM party?

Unless the UNM can pull a rabbit out of the hat, and people have complete memory lapses of the sins of Saakashvili, the GD Party will win, however, not by the large margins they did previously. Many people will still vote for the UNM—and they actually hate it. They will vote just out of protest for the failures of the GD, as it is proving more talk than action.  Its members are almost as greedy and corrupt as those that came before.

As my uncle used to say when I was growing up close to election time, “it is just a crying shame that someone has to win.”

Georgians don’t have much any real choice on Election Day.  They just have to hold their noses and vote for the lesser of two evils, which is the Georgian Dream. Many voters will just not come out to cast their ballots, as they know that any real change by voting is just wishful thinking.  It is the system that needs to completely changed, redesigned, and not just change the people who claim to represent them.

The UNM will “scream foul” as usual, claim widespread election fraud and vote rigging, and more of the same.  They all need to be replaced, and totally new blood brought into government, as both the GD and UNM have failed and betrayed the Georgian people.