by Brian Berletic, with New Eastern Outlook, Moscow, and the Institute of Oriental Studies of the Russian Academy of Sciences, a research institution for the study of the countries and cultures of Asia and North Africa. 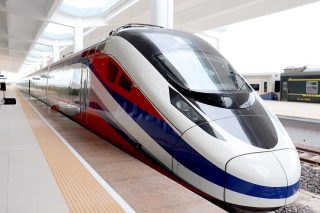 [ Editor’s Note: While the US was building its international future with its huge navy and forever wars, China was building infrastructure in Asia, connecting its neighboring markets.

The US of course is trying to throw the usual wrench into the gears of China’s drive to link up all of Asia with highspeed rail. One of those tools is claims of China trying to take these countries over in the future as debt slaves.

That seems a strange tone to take, when the US seems to have no problem adding massive debt whenever it wants to and for whatever reason, like buying votes at election time.

Read below how the US was trying to pull Bangkok away from connecting to the new China-Laos highspeed rail service that is going into operation now.

It is called the ‘hyperloop’ where people and goods are moved through a vacuum tube at high speed, which is still in its theoretical stage, but it promotes a claim to be safer and cheaper, claims made with nothing supporting them.

We have a Thai billionaire trying to torpedo Bangkok hooking up with the huge Chinese system already operating.

Unfortunately for Americans, Chinese engineers are highly experienced in building and operating bullet trains and all the infrastructure that goes with them, and at a far lower cost than we ever could, due to their low cost of labor, and hence all the supply chain costs going into major projects being much lower.

This is another version similar to the Trump scam of trying to cut the EU off from Russian gas so it could buy the more expensive US LNG for which the EU had no port infrastructure to handle. Despite the US attempt to torpedo Nordstream II and all the threats of sanctions, the EU’s large investment was completed.

But the EU had made no long term gas purchase contracts, so they are getting hammered now like everybody else buying gas at prices that spiked over the last few months… Jim W. Dean ] 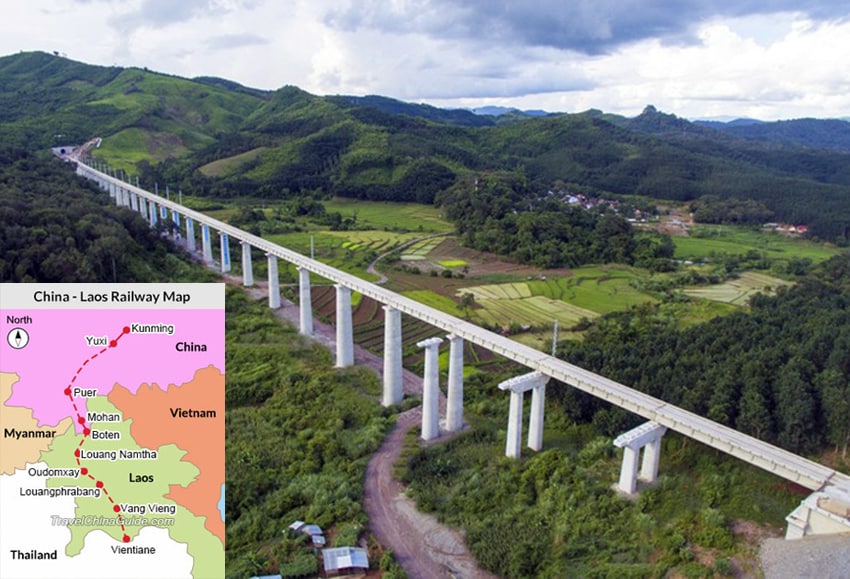 For anyone who travelled through the rugged landlocked Southeast Asian country of Laos years ago, they will remember the twisting mountain roads and the many days by bus it would take to traverse the terrain from China’s border with Laos at Boten to the Laotian capital of Vietniane across the Mekong River from Thailand’s city of Nong Khai.

From Kunming to Vientien, the trip would take at least 3 days – an unforgettable experience for tourists and backpackers, but a gruelling obstacle for people travelling on business or trying to transport goods.

This changed over the years as China, Laos’ neighbor to the north, repaired existing roads and built new modern highways.

The new transit routes cut the trip from 3 days to just 22 hours.

And just mid-October 2021 China completed a high-speed rail link between Vientiane and the Boten border crossing meaning that now – a trip from Kunming to Vientiane will take much less than a day.

The long-anticipated completion of the rail line, the delivery of Laos’ first high-speed passenger train, and the opening of the line for operations on December 2, 2021 mark another achievement of China’s Belt and Road Initiative (BRI).

Xinhua News in an article titled, “Bullet train for China-Laos railway arrives in Vientiane,” would note:

Ambassador Jiang [Zaidong] said in his speech at the Saturday ceremony that Laos receives the first modern train in her history today is decisive progress in the construction of the China-Laos railway, and it is also a landmark achievement of the strategic docking between the China-proposed Belt and Road Initiative and Laos strategy to convert itself from a landlocked country to a land-linked hub.

Now, passengers can travel by train from Singapore to China, albeit through a combination of traditional train lines through Malaysia and Thailand before reaching Laos’ new high-speed rail line. From Boten, travellers then have access to China’s massive high-speed rail network – the largest in the world and connecting China’s most remote areas to the nation’s thriving economic centers.

This signifies the opening for Loas a number of doors of opportunity, from increased tourism from China as well as from Southeast Asia via Thailand, but also new opportunities for exports and imports.

China through the BRI has transformed an isolated, landlocked nation in Southeast Asia into a conduit that will connect Southeast Asia to China and enjoy all the benefits of becoming a crossroad between Southeast and East Asia.

The concept of “landports” has been explored and the use of the high-speed rail line for moving freight prioritized from December onward until restrictions related to COVID-19 are lifted and passenger services can be brought online.

Laos is not only now connected to the rest of China through its new high-speed rail line but also connected to the world well-beyond it. The China-Europe freight train – which has already connected Vietnam (Laos’ neighbor to the east) to European markets – could eventually end up transporting goods from Laos and the rest of Southeast Asia as well.

China is Building, US is Bullying

The US has also accused China of engaging in “debt trap diplomacy” which simply notes nations like Laos being unable to afford upfront the costs of an extensive infrastructure project like the newly completed high-speed railway.

However, this accusation by Washington is made absent of the reality that the completed railway will obviously enable economic growth hitherto impossible – growth that will allow the nation to afford the costs incurred and then some.

Conversely the US has only offered to help these “bullied” and “indebted” nations by allowing them to join a US-led military alliance aimed at Beijing itself. The predictable diplomatic, economic, and possibly military fallout that would follow would benefit none of the nations in the Indo-Pacific region and only benefit the United States which would continue exercising primacy over a sufficiently divided Asia.

Nations who have been reluctant to join the US or who have shown interest in working more closely with China have already suffered consequences. Thailand – which is also building a high-speed rail line with China aimed at connecting with Laos’ freshly completed line, thus linking Bangkok to Kunming – has suffered from protracted US-backed anti-government protests. Modelled after similar protests in Hong Kong, the protesters are visibly anti-China.

US-backed billionaire opposition leader Thanathorn Juangroongruangkit had literally travelled to the United States in 2018, just ahead of Thai general elections, to secure support from the US government including within the State Department, USAID, and Freedom House. He would also travel to the Nevada desert to visit a 500 meter test track for the so-called “hyperloop” system.

The hyperloop is a proposed vacuum-sealed tube that transports people and goods at high speed. The only issue is that the hyperloop remains an unproven technology confined to a short desert test track having moved zero actual passengers anywhere and it will be many years until it does – if ever it does.

Thanathorn’s return to Thailand brought with him a serious proposal to cancel the Thai-China high-speed rail line already under construction at the time, and replace it with the still nonexistent hyperloop.

Mr Thanathorn argued that hyperloop technology can create more local jobs, apart from being environmentally friendlier and cheaper to build. It would also be part of a balancing act so that Thailand isn’t reliant on China, he said in the interview in Bangkok.

During a press briefing conducted by Thanathorn, he would specifically mention his belief that Thailand should pivot away from China and toward the US, Japan, and Europe instead.

No explanation was given as to why this was, of what the US, Japan, or Europe have built in terms of infrastructure in Southeast Asia in recent decades, or how something like the still-theoretical hyperloop actually constituted a viable alternative to Chinese high-speed rail technology that moves billions of passengers a year.

In reality, Thanathorn’s otherwise inexplicable proposal meshes with the agenda of the US departments and representatives he met during his 2018 US trip – to arrest development, block cooperation, isolate China, and thus maintain US primacy over the region.

The combined population of the G7 nations still falls short of China’s population alone, saying nothing of Asia’s combined population versus the US. The only viable way for a minority to maintain primacy over a majority is to deny the latter the ability to develop infrastructure, economies, and societies independently. China and the BRI seek to do this for Asia, the US seeks to stop it.

Laos’ high-speed rail line poised to go into operation, with the first ever modern train ready for cross-country service is a huge milestone and a tangible symbol of China’s commitment to development for the region.

Thanathorn’s dreams of hyperloop represent the empty promises offered by the US and the West in general.