[ Editor’s Note: It appears that Biden is trying to bring home as much political bacon as he can from his EU trip to help boost his ratings and the Virginia elections on Tuesday.

The fratricide inside the Democrat Party with the liberal wing much of the cause, has given the Republicans a big stick to whack him over the head that he cannot even manage his own party, much less run the country.

The EU had multiple reasons for wanting to boost Biden, with the top of the list being their dread over the possibility of Godzilla Trump returning some day, or dealing with a reactionary Republican Congress.

That said, after the news broke on the steel tariff news, the EU Trade commissioner Dombrovskis suggested that the deal will not be permanent, describing what was agreed to as a pause in the dispute, which is not an unreasonable approach. Biden meets EU president Ursula von der Leyen on Sunday to flesh out more details, so we will have an update on this Monday.

If Biden comes back with a ‘pretend-a-deal’ on the steel trade and tries to sell that as a big win, the Repubs could eat him alive on Virginia election day. So Monday will be a big day. Theoretically, Democrat party negotiations have been going on to reach a party deal on the social spending package, to help boost their chances in the Virginia governors race.

If the Dems lose, there will be a lot of internal recriminations about a self inflicted wound by the progressive wing that does damage that will go way beyond this bill, in that they will have wounded the Biden presidency and their 2022 election chances by showing such disunity.

It’s already showing up on the Virginia polls, with the independents viewing the Dems as the gang that can’t shoot straight, so why let them run the show. To counter that, the Dems could say, “So you are choosing the insurrection party instead of us? … Jim W. Dean ] 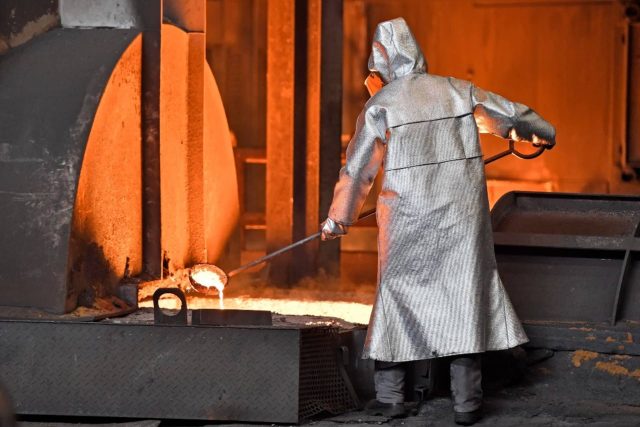 The Biden administration will ease tariffs on steel and aluminum imports from the European Union under an agreement reached Saturday, resolving a Trump-era tension that for years has tarnished trade relations between the longtime allies.

The EU will be permitted to send a set amount of steel and aluminum each year into the United States duty free under the new arrangement.

The White House hasn’t specified how much will be allowed or what the duties will be on imports that exceed the limits, but the current tariffs are 25 percent for steel and 10 percent for aluminum.

The new arrangement required months of intense negotiations among top trade officials and has been viewed on both sides of the Atlantic as a compromise that the trading partners made for the sake of a fresh start following four years of discord under former President Donald Trump.

…“Not only does today’s deal remove one of the largest bilateral irritants in the U.S.-EU relationship, it actually transforms it into a joint forward progress on two central challenges,” National Security Adviser Jake Sullivan told reporters on the briefing call.

You can read the whole Politico article here.