[ Editor’s Note: Instead of China and Russian engaging in forever wars in an effort toward global hegemony, they have focused on their long term economies that are the foundation of a credible military defense.

As for a traditional military defense, Russia, with a much smaller economy than China, focused on technical innovation areas like cyber warfare. The country that is able to use that tool to make an incoming strike’s missiles and planes fall out of the air does not have to have a numerical weapons superiority.

Both countries have had to expand their navies, but seem to be doing so in a mostly defensive posture, staying close to shore to keep the US navy further out, to gain the precious extra time to evlaluate an incoming strike and the best response.

The wild card is the increasing pace of hypersonic missile development and deployment. The US was late to that game, with funding being diverted into the ‘forever wars’, the first love of the military industrial complex folks.

The combination of China’s and Russia’s defense technology and their potential mass production of these weapons present a strong deterrent against a US/NATO attack.

The West thought it would be cool to push its missile shields close to Russia’s and China’s borders to be better able to intimidate them with a first strike capability. But hypersonic missile use presents a scenario where a disaster could unfold quickly.

If for example an incoming strike could be defeated, it would only take minutes for all of those launch positions to be visited by the hypersonic missiles of the targeted country, and the same for an attacking force’s forward command centers.

Thirty minutes from the start of an offensive Western attack might find a lot of ashen faced military and civilian commanders looking at a disaster, and having to deploy their plan B psyop for such events, which is to claim that the target was the aggressor.

Yes folks, they would do that in a heart beat. An example of that scenario was the Trump Whitehouse command center staying up all night to formulate their story about no fatalities after Iran retaliated at the big US base in Iraq.

They would have to try to save their professional skins. We can only pray that a better class of leadership emerges that has the deescalation talents needed, with the first one betting on getting the fingers of our military industrial complex people off our throats, and everyone else’s… Jim W. Dean ] 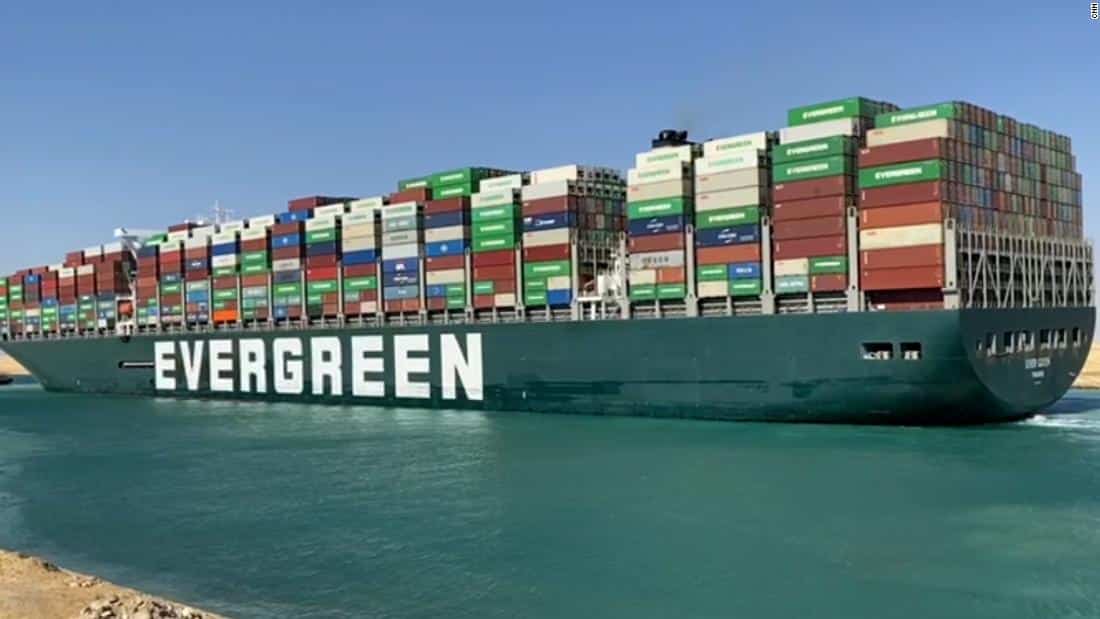 After the container ship Ever Given got stuck in the waters of the Suez Canal in 2020, global trade faced the consequences of a crisis factor that was previously considered unlikely.

This incident highlighted the need, at least, to improve infrastructure capable of meeting the requirements of the ongoing growth of the global supply chain of commodities and raw materials.

However, other growing risks in this region may directly affect the safety and stability of this route, prompting an early search for an alternative to the Suez Canal.

The recent global warming has steadily eroded the Arctic ice sheet, opening up access to year-round economic activity in the Arctic. In this context, a bet could be placed on the 5,600-km-long Northern Sea Route (NSR) from Asia to Europe, which is expected to be the main maritime alternative to the Suez Canal.

If the Northern Sea Route is made available throughout the year, it will become an essential logistical and geostrategic link that many believe will be a “game-changer.”

The Northern Sea Route refers to the route alongside Russia’s northern territories, east of the Novaya Zemlya archipelago in the Arctic Ocean, part of the Arkhangelsk region of the Russian Federation.

The route continues along the Russian Arctic coast of the Kara Sea, part of the Arctic Ocean north of Siberia between the Kara Sea in the west and the Laptev Sea in the east, and then along the Siberian coast to the Bering Strait (the strait between the easternmost point of Asia and the westernmost point of America, with Russia to the east and the United States, Alaska, to the west).

The Northern Sea Route links European and Far Eastern ports of Russia, as well as estuaries of navigable Siberian rivers into one single transport system, passing through the seas of the Arctic and Pacific Oceans such as the Barents Sea, Kara Sea, Laptev Sea, East Siberian Sea, Chukchi Sea, and the Bering Sea).

This is a highly valued shipping route as it significantly reduces the distance between Europe and Asia by sea, compared to the “traditional” passage through the Suez Canal. For example, the passage of a cargo ship through the Suez Canal from Amsterdam, Netherlands, to Dalian, China, takes 48 days.

The Northern Sea Route shortens this voyage by 13 days. Here, it is hardly necessary to say how important it is for logistics, especially today when the load on logistics chains around the world has increased tremendously.

Only a few dozens of cargo ships have passed through the Northern Sea Route so far. This is because the northern route is currently not always open. It is only partially accessible from July to November, and during the rest of the year, its most important sections are blocked by ice. Even during the warm months, a simple cargo ship cannot pass through due to the threat of glaciers.

Thankfully, the situation is changing rapidly, making the Northern Sea Route more accessible. With a need to open this route as soon as possible, special cargo ships are being built that can sail along this route without the icebreakers.

Russia, which can benefit the most from the Northern Sea Route, plans to create a full-fledged maritime transport corridor within the next five years, allowing the transportation of goods and cargo to bypass the Suez Canal and make year-round navigation on this route as early as 2022 or 2023.

This was stated by Yury Trutnev, Deputy Prime Minister of the Russian Federation and Presidential Plenipotentiary Envoy to the Far Eastern Federal District. To that end, the necessary infrastructure, rescue systems, seaports, meteorological stations, and ice radar stations, port, and energy infrastructure facilities are being actively built along the route.

By 2026, Russia plans to nearly double the number of icebreakers that provide uninterrupted passage of cargo ships along the Northern Sea Route and build new ships that will carry goods along the route.

In particular, “the ice class cargo fleet will expand more than three-fold by 2030. It is necessary to build over 30 tankers, 40 bulk carriers, and 22 container ships,” Trutnev specified.

Russia plans to build both heavy-duty nuclear-powered and LNG-powered icebreakers to maintain the passage throughout the year. Ivan Papanin-class multirole special-purpose icebreaking patrol ships are also being built, developed by the Russian company Yugreftransflot from St. Petersburg. It is an Arctic transport vessel with a reinforced hull and electric motors, which won’t need an icebreaker escort.

Thanks to its new Azipod propulsion system and ice reinforcement on the stern, the vessel will pass through ice up to 2.1 m thick. It will also be capable of moving forward at the stern. Such a vessel will be equipped with an ice radar station for providing an optimal route in the ice.

Russia is investing heavily in the infrastructure of the Northern Sea Route and wants it to become fully accessible as soon as possible. With a population of three hundred thousand, Murmansk, near the Norwegian border, already has a modern commercial port, with good rail and road connections to Moscow and the rest of Russia. The Northern Sea Route will give the city a global link.

JSC Vanino Commercial Sea Port (Port Vanino) resumed container cargo operations. Currently, Port Vanino can receive feeder container ships with a capacity of up to 1,000 TEU.  In addition, the ports of Primorye have also increased their activity due to the redirection of cargo traffic from China to Russia.

Due to the limited use of the Northern Sea Route, Russia’s railway system is becoming more active. Transportation via Vladivostok and Nakhodka and further along the Trans-Siberian Railway has proven to be 30-40% cheaper than the sea route via the Suez Canal.

Although it is impossible to replace the Suez Canal entirely, creating a viable alternative that will grow in importance over time is possible.

If the Northern Sea Route served even a tiny fraction of those who today send cargo through the Suez Canal, this in itself would transform world logistics, which, like the economy, is growing relentlessly.