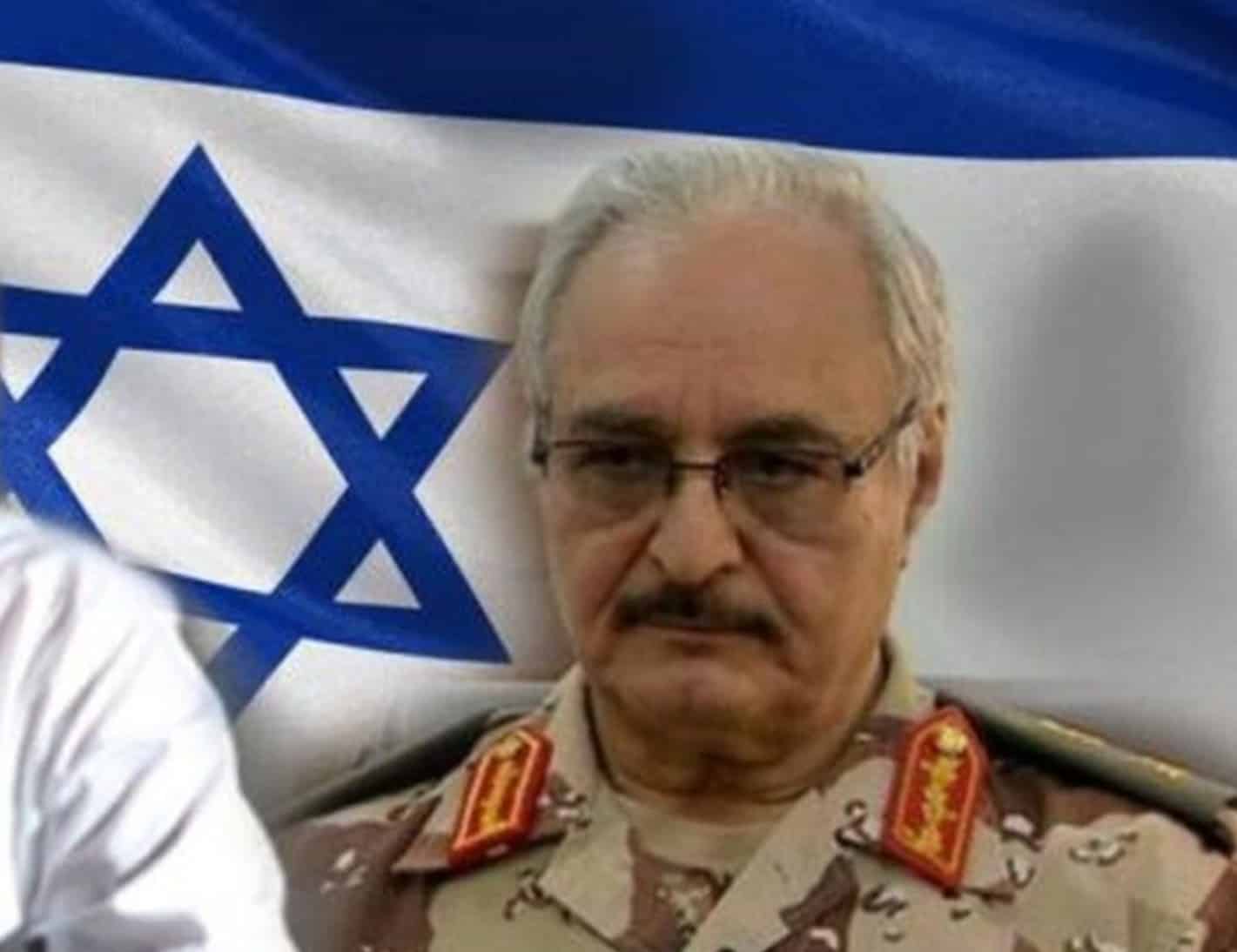 Despite fake reports, General Khalifa Haftar has flown to Israel in a deal brokered by the UAE. Haftar has been working closely with Israel since 2015, through Jordan.

His offer, normalization of relations with Israel, is tied to broader moves within the region as events are heating up in Lebanon and between Turkey and Syria/Russia.

Israel views its support for Haftar as a tool to achieve its security interests. The self-proclaimed Jewish state, however, is keen to keep its relationship with Haftar a secret to avoid embarrassing him before the Arab and Islamic public opinions, particularly his Salafi and nationalist supporters in eastern Libya.

However, this secrecy has been jeopardized when Israeli and Arab media exposed this relationship between Israel and the leader of the self-declared Libyan National Army (LNA).

According to him, Mossad conducted a training for senior LNA officers in Egypt on military tactics, intelligence gathering and analysis, control and command procedures as well as helping them acquire night vision equipment and sniper rifles.

On the other hand, Israeli newspaper The Jerusalem Post reported that Israeli officers were in LNA-controlled areas between August and September 2019 to train Haftar’s militias on street warfare.

However, French newspaper Monde d’Afrique said in a report earlier this month that Haftar’s relations with Israel go back to 2015 when the LNA leader met Mossad officers in Jordan.

The report revealed that Israeli Air Force supported Haftar in bombing the city of Sirte, which lies 450 km east of Tripoli, without stating the date and the target of the shelling.

Supporters of Haftar often praise him for his disputable participation in the 1973 war between Egypt and Israel when he was still a young officer in the Libyan army. Irrespective of the authenticity of those claims, Haftar is now colluding with his former enemies to gain their support for achieving his goal of ruling Libya.

Despite their high ranks, Haftar’s officers lack professionalism and training, particularly in terms of planning and urban warfare, which Israel is willing to offer.

More importantly, Haftar is in need of Israeli air defense systems to counter Turkish drones in Libya that have played an essential role in their defeat in the southern neighborhoods of the capital Tripoli, and their subsequent loss of the strategic Al-Watiya airbase among other areas to the GNA.

Moreover, Haftar seeks the influence of the Jewish lobby in the US to influence decision-makers in the White House to side with LNA.

Addressing Israeli Prime Minister Benjamin Netanyahu, the pro-Haftar official said they “have never and will never be enemies with Tel Aviv”, adding that they hoped for immediate Israeli support.

Al-Badri went on as far as to invite Israel to join a new political initiative with Greece, Cyprus, Egypt and Lebanon to reach a joint maritime agreement to challenge the agreement signed between Turkey and the Tripoli-based GNA.

These remarks caused an uproar among many Libyans, prompting al-Badri to deny the news.

Why does Israel support Haftar?
Israel’s national security concerns are the main drive for its support for Haftar. Since the fall of Muammar Gaddafi’s regime in 2011, there have been reports that weapons arriving from Libya were smuggled into the Gaza Strip through Egypt, something that caused grave security concerns for Israel.

In addition, Tripoli was also a security concern for Tel Aviv during the early period of the Gaddafi era as well as the onset of the Arab Spring in the country in February 2011.

Haftar’s rise in Libya’s political theatre in 2014 and his subsequent takeover of the eastern parts of Libya therefore presented an opportunity for Israel to create a buffer against the transfer of weapons from Libya to Gaza as well having a “friendly” government in Libya by forming an alliance with the new political actor.

Moreover, the oil-rich Libya could present a new market for the Israeli industry whose arms exports are an important economic income.

Israel has sought an alliance with the UAE, Egypt and Saudi Arabia to counter common threats from Iran and Islamist groups. Since Haftar shares the same concerns with Israel on these matters, his relations with Tel Aviv are expected to get stronger.

Israel adopts the policy of “the friend of my friend is my friend”, and “the enemy of my enemy is my friend.” In this context, the Israeli involvement in Libya is likely to increase albeit secretly.

The victories by the GNA and Turkey against Haftar’s militias have worried Israel, which believes that these victories will strengthen the position of Ankara and the GNA in the region regarding the hydrocarbon fields in Eastern Mediterranean.

Turkey and the GNA have previously signed an agreement to demarcate the maritime borders which Israel argues does not correspond to its “interests”.

By forging closer relations with Israel, Haftar may anger other countries hostile to Tel Aviv in the region, such as Algeria and Tunisia, as well as Arab nationalists in countries that currently support Haftar.

To avoid irritating Haftar’s support base in the region, Israel’s engagement with Haftar is conducted behind the scenes and in coordination with Cairo.

Ibrahim Mukhtar contributed to this report from Ankara.

MidEast Monitor: A number of Libyan General Khalifa Haftar’s aides arrived in Israel yesterday onboard a private plane that took off from the UAE, Israeli journalist Itay Blumental said.

Taking to Twitter, Blumental said: “An executive plane used by the men of Libyan General Khalifa Haftar (P4-RMA), which controls eastern Libya, is on its way to Ben Gurion Airport from Dubai.”

He added: “The plane will later take off for Egypt.”

Blumental went on to say that Haftar enjoys the support of Russia, Egypt, the UAE, Jordan, France and Israel.

No official information has been released about the visit.

Anadolu news agency has previously reported Haftar’s aide, Abdul Salam Al-Badri, calling on Israel for help. “We have never been and will never be enemies,” Al-Badri said. “We hope that you [Israel] support us.”

Israeli security and intelligence commentator Yossi Melman, wrote to the Middle East Eye that “Haftar, who has American citizenship, was known to be very close to the CIA during his exile under Muammar Gaddafi.”

He added: “No wonder, then, that Haftar is supported by the administration of President Donald Trump, which outwardly supports international peace efforts but covertly encourages Haftar’s campaigns.”

“US allies in the Middle East follow suit. Among them stand out Egypt and the United Arab Emirates, and to a lesser degree Israel.”

Melman revealed that “the Israeli connection is less well known but still very important,” stating that “the role played by Haftar is a result of the axis created in recent years, consisting of Egypt, the United Arab Emirates, Saudi Arabia and Israel.”

Since the ousting of Gaddafi, Haftar has led Libya’s eastern government in its effort to take control of the country and remove the internationally recognised government in Tripoli.