[ Editor’s Note: The Zionists are antagonizing the West Bank Palestinians once again. This smells of an attempt to motivate a retaliation attack which would then be followed by more extensive army aggression.

The US, as usual, will remain silent. Biden has his hands full, and our ‘Israeli friends’ know this, so they will exploit the opening, knowing that with his polling in the 46% range he does not want to piss them off.

So much for the power of the US presidency when it comes to human rights, where Israelis hold a veto card. The Holocausted have become the Holocausters, and make no apologies for it.

I did not have time to check the Israeli news sites for what’s up with this bulldozing of the Islamic cemetery, other than trolling for revenge suicide bombers so some faction of the Israeli political structure can benefit from it somehow.

Turkey’s armed force are in their jumpoff positions in Syria and on the Kurdish border. If Erdogan pulls the trigger, he will use his entire army to avoid a defeat. I think Russia is not interested in interceding on that scale.

We read today that Putin says his military has 2000 drones. Would he want to risk losing 500 of them for the Syrians and Kurds?

Turkey won the last Syrian conflict by using a lot of drones, and quickly, knocking out as much of the Syrian army as it could, with no real Russian air defense stepping in after two of the systems given to the Syrians went up in smoke.

The Gulf State Arabs have given Israel a big bear hug. I would not be surprised by the announcement of a joint defense treaty among them to top off a tumultuous 2021… Jim W. Dean ] 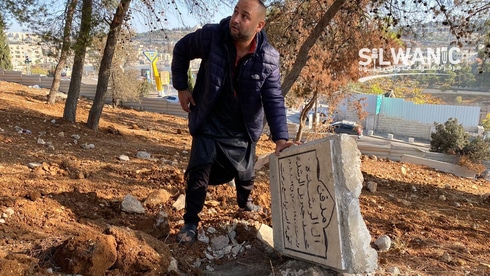 The Israeli occupation forces demolished water pipes and roads in the Massafer Yatta area, leaving 4 villages with no water. Isareli terrorists from the settler-colony ‘Susya’ attacked a house in Palestinian Susya, backed by the Israeli army, while activists coming to document criminal construction on Palestinian lands were attacked, too.

Soldiers and policemen prevented Palestinian villagers and activists from clearing the only road to Bir Al Eid, blocked with dirt by settlers. The occupation forces demolished a clinic and the pergola of a playground in a school in the northern Palestinian Jordan Valley.

This week too, Palestinian and activist olive harvesters were attacked by Jewish terrorists throughout the West Bank. ‘The Supreme Planning Council’ in Beit El approved all the plans for building 3000 dwellings in the settler-colonies.

A mother was dragged by force from her son’s grave during the Jerusalem Municipality’s evacuation work at the Muslim cemetery Al Yusufia. The Israeli Minister of Homeland Security prohibited a cultural event that was to take place in the Catholic Church compound in East Jerusalem

Large army forces accompanied with heavy equipment went on a destruction rampage on Monday October 25, in the Massafer Yatta area. After destroying and confiscating the protest tent at Mufaqara, they proceeded to Khalat A-Dab’a, destroyed water pipes and roads, and finished up by destroying the route of the main road of Massafer Yatta.

Four villages containing about 300 persons were left without any connection to water sources.

On Thursday, settler-colonists stole olives from a grove closed to Israelis by official edict at Susya, and were chased away by activists. The same day, Bir Al Eid villagers discovered that settler-colonists had blocked the road to their village by pouring out truckloads of dirt at three spots along the way.

On Saturday activists came to help the villagers clear this criminal blockage, but army and police prevented them from doing so by declaring the area a ‘closed military zone’.

Masked men from the settler-colony ‘Susya’ charged into Palestinian Susya on Saturday and slung stones towards a house in the village. Army personnel came to protect them and enabled them to return to the settler-colony unhampered.

That day, activists came out to document new criminal construction in an area nearby called ‘Flag Hill’ and found two fancy dwellings connected to water and electricity, plus a well-tended garden. The settler-colonists came out of the houses and attacked the activists.

An army force arriving there declared the place a ‘closed military zone’, enforcing this against the activists only, while about o30 settler-colonists were gathered at the site. They began to march towards Palestinian Susya, but the army prevented this action.

In Atariya, on Saturday, a protest was held by Palestinian inhabitants and activists against raising a settler-colonist water tower on Palestinian land, and Israeli army forces prevented this protest by declaring the place a ‘closed military zone’. Activists accompanied Palestinian grazing at Atariya, unhampered.

Please make an effort to register no later than Thursday evening. Please bring an ID/passport, a hat, water and food for the day. It is advised to take into consideration cultural differences in the choice of clothing.

Activists accompanied Palestinian shepherds in the northern and southern parts of the valley most days this week. At Khalat Makhoul activists also spent the night in the middle of the week in order to protect villagers from their attacking settler-colonist neighbors.

At Hamra activists managed to prevent the violent settler-colonist from the nearby outpost to fly his drone over the Palestinian flocks on Monday, and on other days of the week their presence prevented harassments by this settler-colonist and his workers.

At Auja grazing took place accompanied by activists unhampered most days this week, but on Saturday soldiers came and, at the settler-colonists’ bidding, tried to chase away the shepherds by falsely claiming a ‘closed military zone’.

At a school in the Hamam Al Malih community in the northern part of the Valley, on Monday the occupation forces destroyed a pergola that shaded a playground and two room under construction that were planned to serve as a clinic for the schoolchildren. On Wednesday they confiscated from the Humsa community – which they completely demolished last summer – anything that might serve for construction.

At Farisiya a Palestinian shepherd documented a stone-throwing attack against his flock by a settler-colonist on Saturday.

On Monday, October 25, the Jerusalem Municipality and Israeli Nature and Parks Authority continued works in the Muslim cemetery Al Yusufiya. A bereaved Palestinian mother tried to cling to her son’s gravestone and was forcibly removed. In documentation photos, gravestones appear smashed with ‘hill youth’ thugs acting as ‘municipality employees’. Works there continued the next day despite protests by relatives of the deceased persons buried there.

The same day, Monday, a demonstration was held opposite the Supreme Court protesting the robbery of Silwan homes from their Palestinian owners by settler-colonist associations.

On Tuesday, Israeli Minister of Homeland Security Omer Bar-Lev signed an order forbidding a cultural event to be held for children and adults in the East Jerusalem Catholic Church compound, claiming that the event is linked to the Palestinian Authority.

The event, already taking place, was halted. That same day, it was reported that the occupation police closed children’s activities at the sports club in Silwan claiming that the activity was linked to the Palestinian Authority.

The police violently attacked demonstrators once again at their weekly protest vigil in Sheikh Jarrah on Friday, grabbed Palestine flags and pushed an elderly woman to the ground. The right-wing thugs who have been showing up there lately violently attacked a Palestinian activist who tried to complain to police and was arrested (and released that same night). The thug who attacked him was neither detained nor questioned.

On Tuesday, October 26, the occupation authorities demolished a structure in Wadi Joz.

The weekly protest in Sheikh Jarrah takes place every Friday. We will meet at the Sheikh Jarrah Garden, Nablus Road and Dahlmann St. at 4 p.m.

Throughout the West Bank

Activists of Rabbis for Human Rights helping farmers of Awarta village with their olive harvest on Monday, October 25, were attacked with teargas by Jewish terrorists from the ‘Itamar’ settler-colony who arrived there on foot and on mini-tractors. One of the activists needed medical attention. The activists reported that this attack took place in full view of Israeli soldiers.

On Monday, the Israeli army prevented an olive harvest in the groves of Bourin village (Nablus district) near the outpost ‘Givat Ronen’. Activists and Palestinian farmers returned there on the morrow and completed the harvest unhampered. The same Tuesday, October 26, masked Jewish terrorists pepper-sprayed employees of the Red Cross during a tour they held between Bourin and the violent outpost of ‘Yitzhar’.

On Wednesday, October 27, the ‘Supreme Planning Council’ at Beit El approved all plans for constructing 3,000 dwellings in the settler-colonies.

Hadash (left-wing Arab-Jewish political party) activists demonstrated on Tuesday opposite the Israeli army HQ in Tel Aviv, in protest of Defense Minsiter Gantz’s declaration, denouncing 6 Palestinian human rights organizations as ‘terrorist organizations’, and the deepening of the occupation under the aegis of the Meretz (left-wing) and Ra’am (Arab) parties.