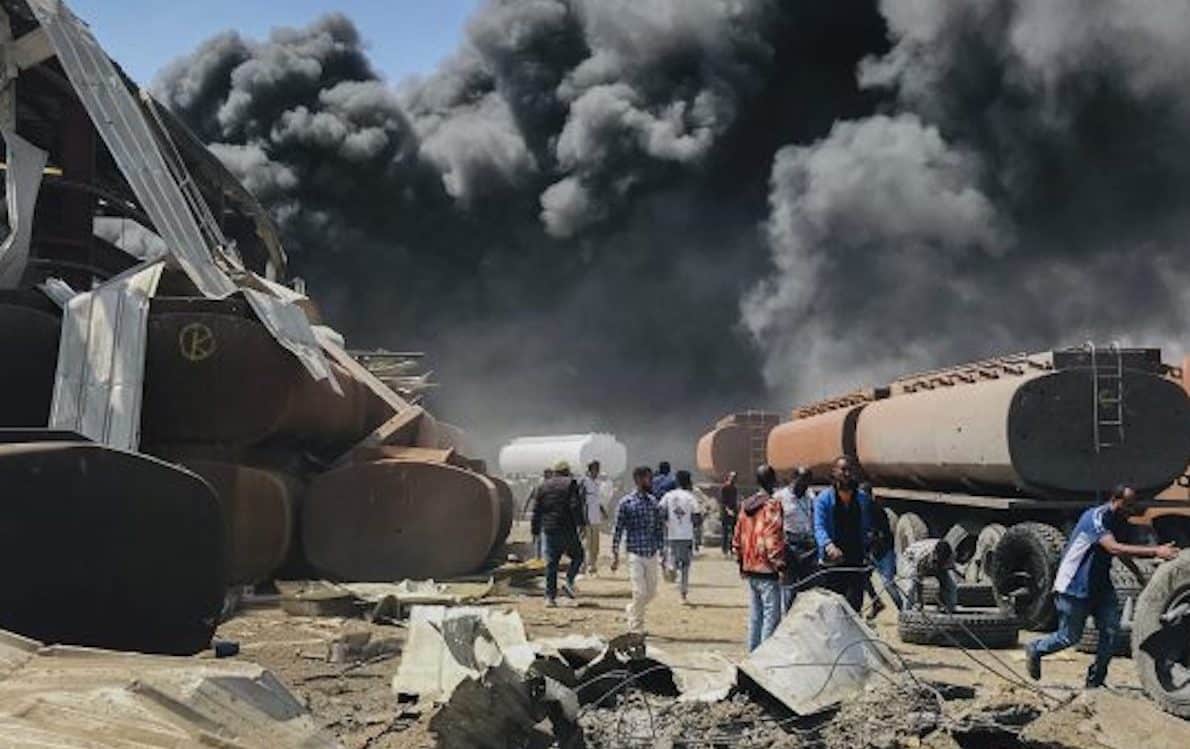 One cannot understand what is happening in Ethiopia, where Government declares State Of Emergency as the Civil War escalates sharply (news below), without first knowing that one of the main supporters of the communist and largely Islamist guerrillas of Tigray, holds and will continue to hold one of the most powerful posts in the world.

Among the historical political leaders of the Tigrayan People’s Liberation Front (TPLF), the name of Tedros Adhanom Ghebreyesus, who has steered the global response to the COVID-19 pandemic, is on course to serve a second five-year term as head of the World Health Organization (WHO) after being the only candidate nominated by 28 countries.

Tedros, former Ethiopian Minister of Health from 2005 to 2012 thanks to the TPLF communist Tigrayans, was the first African elected WHO director-general in May 2017.

“WHO can announce that a single candidate was proposed by member states by the 23 September 2021 deadline: Dr Tedros Adhanom Ghebreyesus, who is the incumbent director-general,” the agency said in a statement.

«The nominations were kept secret to limit lengthy campaigning. Earlier, the agency sent a letter to member states informing them of the confidential nominations contained in the sealed envelopes submitted by the deadline» Reuters wrote a few days ago

«Ethiopia declined to nominate Tedros for a second term due to friction over the conflict in the Tigray region of northern Ethiopia, making it necessary for other countries to step in and do so.The issue is so sensitive that the African Union has not even discussed the appointment, including at its latest summit this month, African diplomats said» added the international agency.

Tedros drew support from France and Germany, among other European Union members, and three African countries – Botswana, Kenya and Rwanda – the official nomination list showed. Britain, China, Russia and the United States were not among them.

The director general of the UN health agency has acquired immense power worldwide after the outbreak of the Covid-19 pandemic. He was praised for his commitment to him even though he has racked up two macroscopic failures.

The first occurred in March 2020 when the WHO issued the recommendation not to use cortisone, which later proved to be useful if not essential in the treatment of Covid-19.

The second has happened several times and continues to repeat itself: the failure of the task force appointed by the assembly, at the urging of the European Union and a hundred countries, to establish the origins of the SARS-Cov-2 virus.

In fact, the commission has repeatedly appointed scientists to deny the theory of the virus built in the laboratory, as claimed by authoritative virologists but also intelligence experts.
Among these, the name of Peter Daszak, the Anglo-American zoologist who urged 27 colleagues to support the natural origin from the first days of the pandemic, caused a scandal, as previewed by Gospa News and then by many mainstream media.

Daszak did this, despite having worked alongside Shi Zhengli, the head of the Center for Emerging Infectious Diseases of the Wuhan Institute of Virology, in the experiments on the chimeric SARS superviruses infected with HIV with the enhancement of the viral load (gain of function) for “dual use” vaccine or bioweapon purposes.It is important to remember this because those experiments were funded by the EcoHealthAlliance of Daszak (among whose partners there is Johnson & Johnson) also thanks to the contributions of Anthony Fauci’s NIAID, together with the Bill & Melinda Gates Foundation which is the main funder of the WHO and was the sponsor of Tedros’ nomination for management.

If there had not been those two failures, probably the world vaccination campaign would have encountered more difficulties: cortisone would have contained the number of deaths and the eventual confirmation of the laboratory origin of SARS-Cov-2 would have aroused greater resistance among the population. trusting world institutions such as the WHO that had overseen the dangerous experiments.

That is why today Tedros, considered a puppet in the hands of Gates, has acquired a considerable world power and can therefore afford to use his influence in favor of the friends of Tigray.
Of course this will never officially appear.

But since Gates himself was one of the major financiers of the multinational management company Mc Kinsey which restructured all the most important American intelligence agencies (CIA and NSA), there are many hidden ways in which he may have been helped to raise his head. the Tigrayan People’s Liberation Front (TPLF) which seemed already destined for defeat by the regular army of Ethiopia.

by The Soufan Center Intel-Brief

As Ethiopia’s civil war continues to drag on, Tigrayan rebels are advancing toward the capital, leading the government in Addis Ababa declare a state of emergency, currently slated for six months. The state of emergency provides Ethiopia’s government with the ability to detain critics, shutter media, and establish curfews to limit movement. Reporting suggested that several Ethiopian army units were in retreat, painting a far different picture than the overconfident assessments offered early on by Ethiopia’s Prime Minister, Abiy Ahmed—formerly a winner of the Nobel Peace Prize in 2019 for his efforts to end Ethiopia’s longstanding war with neighboring Eritrea. Yesterday, Ahmed punctuated the one-year mark of the war by promising to “sacrifice our blood and bone to bury this enemy and uphold Ethiopia’s dignity and flag.”

Ahmed has come under intense scrutiny for his handling of the conflict. Last year, Ahmed launched an ill-fated assaultof Tigray in order to vanquish his main political rival, the Tigray People’s Liberation Front (TPLF). In June, the Ethiopian military withdrew from Tigray, with several thousand soldiers captured. Since the summer, the TPLF has maintained its momentum, resulting in the current offensive and advance through towns approaching Addis Ababa as they move from north to south. The TPLF has apparently joined forces with another rebel group, the Oromo Liberation Army (OLA), which has reinforced the TPLF’s southern advance.

Ahmed called on Ethiopia’s citizens to pick up weapons and defend the country against the rebels’ offensive. The government may also look to conscription to reinforce the ranks of the Ethiopian armed forces. The Ethiopian government has restricted journalists from entering parts of the country to cover the conflict, and when combined with frequent internet disruptions, the result has been a dire conflict lacking the international attention it deserves. The conflict has destabilized Africa’s second most populous country and featured widespread human rights abuses. President Biden threatened Ethiopia with sanctions tied to the accusations of grievous human rights abuses and pushed the importance of peace talks to end the conflict. Tigrayan rebels have also been accused of committing atrocities. A recently released report co-authored by the United Nations Human Rights Office and Ethiopia’s human rights commission concluded that all parties to the conflict “committed violations of international human rights, humanitarian and refugee law, some of which may amount to war crimes and crimes against humanity.”

A spreading famine in Ethiopia has further contributed to instability throughout the country and growing concerns over the potential for spillover violence into other countries in the region. As with any civil war, there is a significant risk that refugees and internally displaced persons will bear the brunt of the humanitarian crisis. Ethiopia’s blockade of the Tigray region imperils a population of over 5 million people in need of humanitarian assistance. The United Nations assesses that approximately 400,000 people are currently facing “famine-like conditions,” as reported by the New York Times.

The civil war is not the only major issue to ensnare Ethiopia recently. In an interesting twist, the recent coup in Sudan may have an Ethiopia link. The coup was allegedly backed by Egypt’s President Abdel Fattah al-Sisi; the Wall Street Journal reported that just prior to the coup, Abbas Kamel, Egypt’s intelligence chief, traveled to Sudan to meet with coup leader General Abdel Fattah al-Burhan, but eschewed meeting with Abdalla Hamdok, Sudan’s prime minister. Hamdok has been supportive of Ethiopia’s Grand Ethiopian Renaissance Dam (GERD) project, which Egypt claims will interfere significantly with waters running into the Nile River.

Note: links inside the article has been added by Gospa News