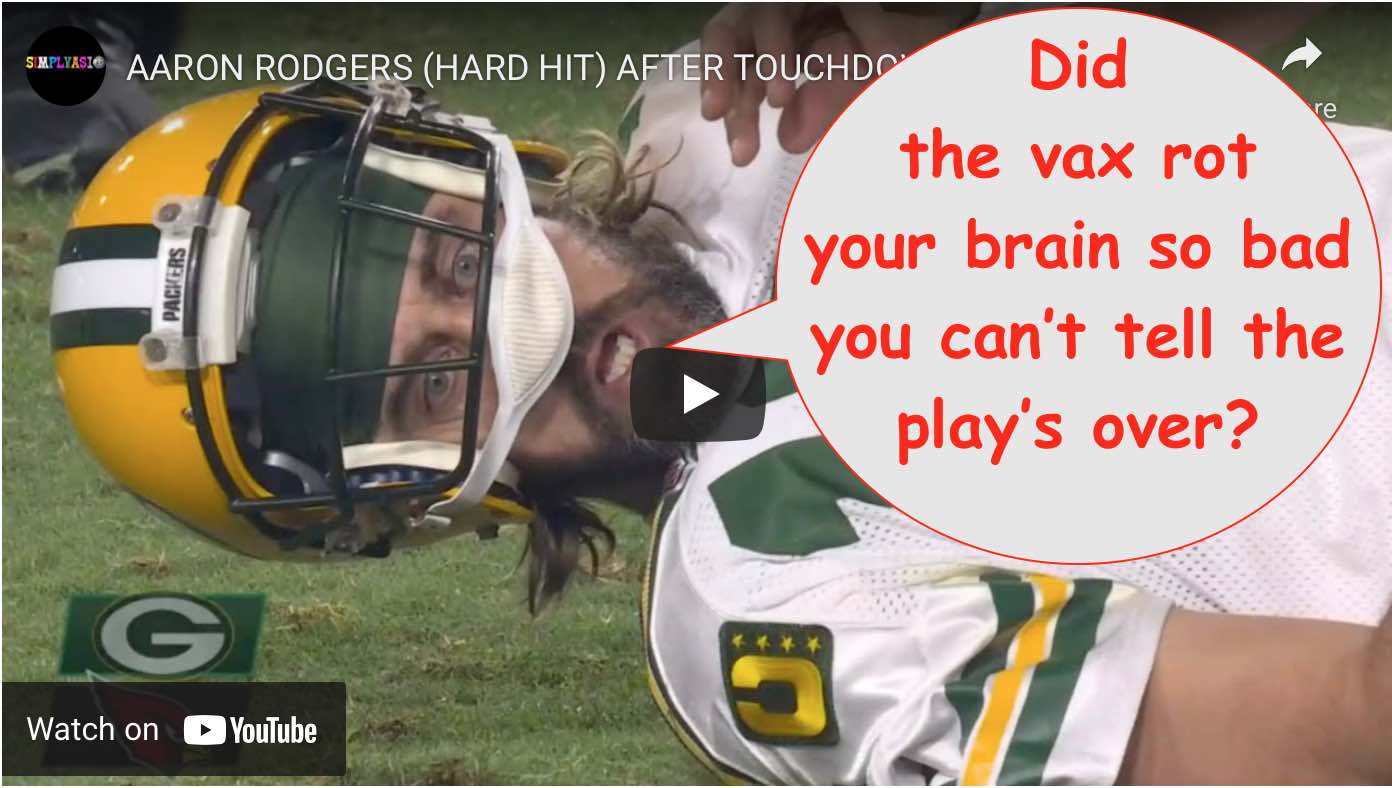 The media is taking cheap shots at Aaron Rodgers that make Jordan Phillips’ late hit look like a tap on the shoulder.

Get a load of these moronic, obscenely biased headlines:

Talk about piling on!

The mainstream media no longer even pretends to be fair, impartial, objective, fact-based, or balanced. Today it’s all Orwellian, all the time. And Aaron Rodgers just got fingered as the scapegoat in today’s edition of Big Brother’s Two Minutes of Hate.

Will Packer fans mount an unruly “let Rodgers play” protest outside Arrowhead Stadium this Sunday, forcing their way into the stadium, the way Nets fans did for Kyrie Irving?

Somebody organize one quick and I’ll drive to Kansas City! Wouldn’t want to miss it!

Rodgers isn’t the only Wisconsin football star pushing back against the vax. The other leading Badger State football hero this year, University of Wisconsin linebacker Leo Chenal, is a conscientious objector against vaccines developed through Dr. Mengele style research on aborted fetuses. And like Rodgers, Chenal has noticed VAERS data suggesting that non-elderly people with no co-morbidities, especially young athletes in superb physical condition, may be better off unvaxxed.

Of course it’s undoubtedly just a coincidence that Rodgers and Chenal are playing so much better than the sluggish, confused, myocarditis-ridden vaxxed players they’re up against. Here is Chenal taking advantaged of vaxxed offensive linemen trying to protect a vaxxed quarterback:

Leo Chenal and his brother, fullback John Chenal, who has also made some big plays this year, are being forced to submit to discriminatory weekly COVID testing as punishment for standing up for their beliefs. Their father, Dave Chenal, told me:

“Yeah, my sons are lab rats in the control group of the biggest and most illegal human medical experiment in history. The tragedy is if the powers that be remain in power my sons’ recorded accomplishments will be scrubbed from the record because their performance under these controlled conditions oppose the narrative that the vaccines are safe and effective.”

Could Dave Chenal be right? What are the odds that today’s experimental COVID gene therapy will be eventually recognized as a mega-disaster? The “expert consensus” created by big money says such odds are very low…though definitely greater than zero. Many independent experts, including a Nobel Laureate virologist, are less optimistic. In any case, young and healthy people, whose odds of being badly harmed by COVID-19 are very low, have good reasons to want to remain in the control group. Yet for some reason the authorities don’t want there to BE a control group. That’s why they are making life miserable for people like Rodgers and the Chenal brothers…and airline employees, medical workers, municipal workers, people who work for large and medium sized corporations, people who live in certain jurisdictions…the list just keeps on growing.

The weekly stick-up-your-nose torture sessions at Wisconsin are bad enough. But the NFL protocol is worse. Aaron Rodgers apparently is being forced to endure a COVID test every single day! According to Sporting News:

“Unvaccinated individuals must be tested for COVID every day at the team facility. If a player misses even one day of testing, they will be required to test negative for COVID for five straight days before re-entering the facility. That’s what happened to Cam Newton before the final week of the Patriots’ preseason.”

The best spit test, of course, would be spitting in the faces of the biowar fiends who made both the disease and the vaccines.

And if they make peoples’ lives miserable enough, eventually a whole lot of guns are going to start spitting bullets.