[ Editor’s Note: The shifting sands are now visible in Asia, as regional powers review their security arrangements after the Afghan Taliban takes the country back from the US looters who had been running it as a continuing get rich quick scheme.

The West may try to puff up the expansion threat by China with its putting a base on the border, intended to have some control of who and what is passing through the border, like infiltrating terrorist groups.

Border guards are notorious for collecting ‘gratuities’ to facilitate anything passing through their border, and that typically gets shared all the way up to the top of the leadership.

China has helped fund the Tajik government’s security efforts, much like the US often does where it wants to.

Russia and China never butt heads on security base issues, but seem to pick their partners by who can most feasibly maintain bases and logistics in far away places. Think about how many US overseas bases there are, which are more than anyone else.

The US is already there with some of its air bases, often its first move as they are instant aerial surveillance platforms, and offensive and defensive missiles can be brought in short order with the US huge airlift capacity, but which is expensive for the US taxpayers who have zero say in the matter.

Turkey once had a language reach into the region, but it is too far away to be a player here. Such endeavors are reserved for the deep pocket international players.

Mr. Platov has a good review for us today, courtesy of our relationship with New Eastern Outlook and their large stable of geopolitical analysts… Jim W. Dean ] 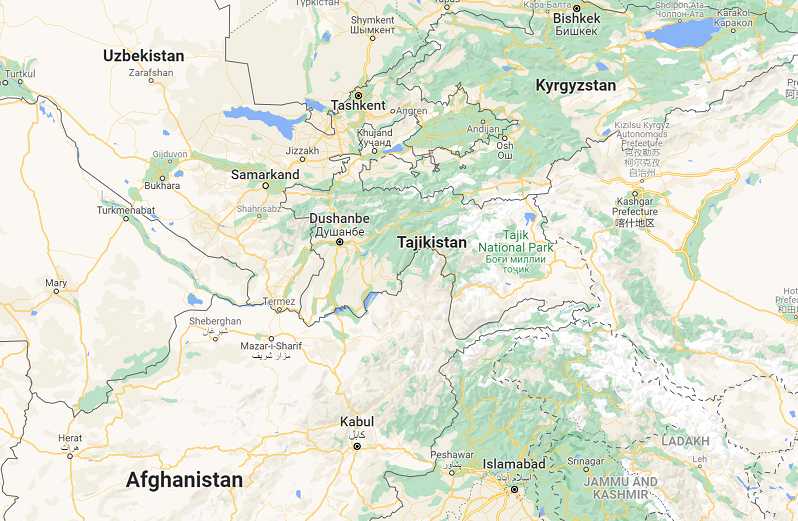 After the failed US withdrawal from Afghanistan and the coming to power in Kabul of the Taliban (a terrorist group banned in the Russian Federation), the regional security system in Central Asia began to undergo rapid reformatting.

New players, the USA, Turkey, and China are trying to enter the traditional zone of influence and responsibility of Russia in the territory of the former Soviet republics.

The United States and Turkey, formal allies in the NATO bloc, have become particularly active, becoming direct competitors even in recent attempts to expand into Central Asia. In this matter, Ankara is trying to actively use its pan-Turkic tactics, strengthening ties with the region’s countries by promoting the idea of “Great Turan.”

The USA still hopes to remain in the region by placing its military bases in some Central Asian countries. Although the USA already has experience of a military presence in Central Asia, after the events of 2014, Moscow has managed to squeeze US military bases out of its underbelly.

Dissatisfied with this policy of Russia to limit the influence and penetration of the USA and Turkey into Central Asia, both countries are monitoring China’s activities in the region with particular zeal, trying through their capabilities to limit and even compromise it.

Thus, one such provocative activity was publishing information by some American media outlets about China allegedly establishing a number of military bases in Tajikistan.

Specifically, according to the Washington Post, a secret Chinese military base allegedly appeared as early as 2017 in the Murghob District of Gorno-Badakhshan Autonomous Region in Tajikistan, close to the borders with Afghanistan.

According to information published by the American media, Chinese soldiers from the Xinjiang Uyghur Autonomous Region are allegedly serving there.

However, the USA failed to cause a quarrel between Russia and China with such insinuations, as China had earlier arranged its actions with Russia through diplomatic channels, explaining them not for military purposes but with logistical aims to control the possible movement of Uyghur militants from Afghanistan to China and back.

The military facility in question is minimal in size, where in addition to the Tajiks, representatives of the Chinese and Afghan sides were present.

Everything changed after the Taliban came to power in Kabul and the need to strengthen containment measures on the Tajik-Afghan border in the Murghob District of Gorno-Badakhshan Autonomous Region and build a new military base for the needs of Tajik special forces.

This circumstance and the explicit unwillingness of the Central Asian states to permit the stationing of American military bases in the region have led the USA to launch a new propaganda campaign alleging the construction of another Chinese military base. If, for example, to believe the data of the Tajik editorial board of Azattyk (this is the US-funded Central Asian Radio Liberty.)

The media, recognized in Russia as a foreign agent), Dushanbe allegedly gave the green light to construct a new Chinese military facility on its territory. It offered China full ownership of the existing base and was ready to transfer it with complete control.

However, this latest claim of the USA was quickly spotted by the official announcement of the Tajik authorities, who announced that China would indeed build a base in the Gorno-Badakhshan Autonomous Region, bordering China and Afghanistan. Still, it will belong to a special unit of rapid reaction Regional Department for Organized Crime Control of Tajikistan’s Minister of Internal Affairs.

Although the number of personnel of the future base has not been announced yet, according to military experts, the contingent may consist of 300~500 servicemen, several light armored vehicles, and possibly Unmanned Areal Vehicles (UAV).

Amid a Taliban takeover in Afghanistan, this secure facility will be built as part of an agreement between Tajikistan’s Interior Ministry and China’s Ministry of State Security.

The cost of the facility is estimated at $10 million, and the construction will be implemented at the expense of funds allocated on a gratuitous basis by China, which assumes the responsibility for providing the necessary machinery, equipment, and materials for the project.

The plan to build this military base emerged amid tensions between Dushanbe and the new Taliban government. Tajik President Emomalî Rahmon has refused to recognize the Taliban government, calling for a better representation of Afghanistan’s ethnic groups, of which Tajiks are the second largest.

According to Reuters, the Taliban has allegedly forged an alliance with an ethnic Tajik militant group based in northern Afghanistan that seeks to overthrow Emomalî Rahmon’s government.

Undoubtedly, having decided to build the base in the Gorno-Badakhshan Autonomous Region, China primarily pursues its own interests since the region has always been of concern to the Chinese authorities. Through this base, Uyghur militants of the East Turkistan Islamic Movement (banned in Russia) can enter China and organize sabotage.

If necessary, China intends to use this base of the Tajik Interior Ministry to protect its borders from attacks by armed groups in Afghanistan. In addition, the presence of such a military base on the border with Afghanistan will be an additional trump card in China’s negotiations in cooperation with the new authorities in Kabul.

In addition, this base could undoubtedly be Beijing’s response to the active foreign expansion in Central Asia of Turkey, which seeks to create a kind of logistical superpower on the route between Asia and Europe and become the leading transit country for Chinese goods to the European market.

The mentioned role of China in building a new military base in GBAR may also be a definite step of Beijing to prevent the expansion of India’s influence in Tajikistan, which, in particular, is trying to create a specific position in the activities of the Farkhor Air Base in Tajikistan. China and especially its current ally Pakistan certainly would not want this.

As for China’s assumption of financial expenses for constructing a new Tajik military base, it should be recalled that China has allocated funds for Tajikistan’s defense sector before. For example, China had previously been awarded a grant to strengthen security along the Tajik-Afghan border.

It planned to build three commandants’ offices, four frontier stations, four frontier posts, and one training center. In 2016, the House of Officers was built in Dushanbe with the financial support of China for $19 million. In November 2018, a Centre for Combating Terrorism, Extremism, and Separatism was opened in the Tajik capital with Chinese money.