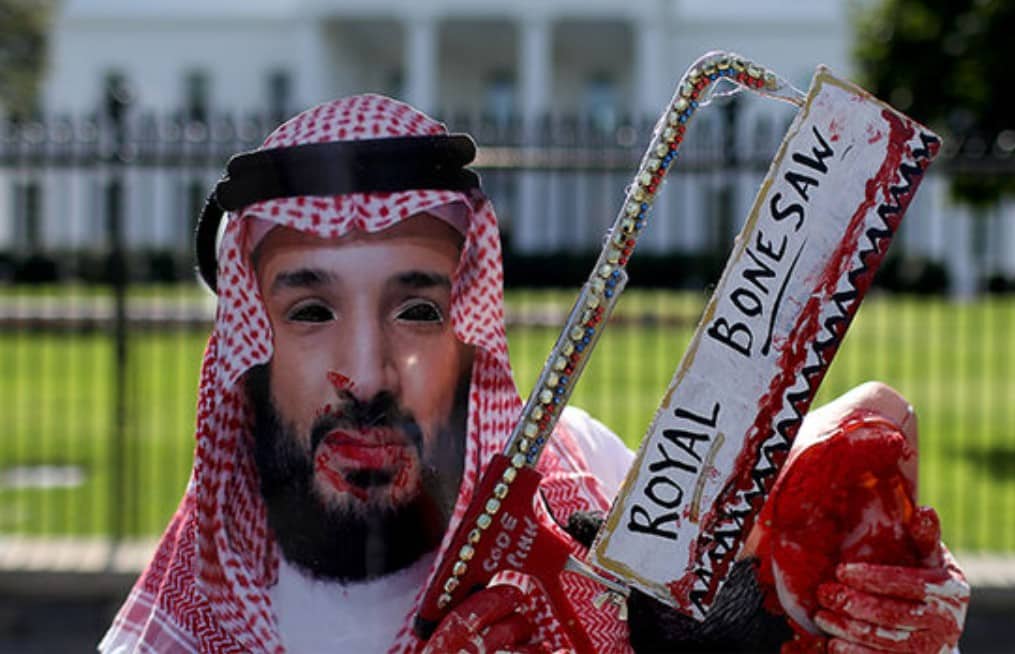 Press TV: It has been less than five years since Mohammed bin Salman came to prominence as the Crown Prince and the de facto leader of the Kingdom of Saudi Arabia. Yet over this rather short period of time, he has damaged his reputation and has become notorious as a young prince who is seeking to bring the whole kingdom under the yoke of his servitude while shocking the world with his callous disregard for human life.

Arresting other princes, influential people and rights activists, waging a bloody war on the poor Yemeni civilians and bringing about a host of other plights such as famine and diseases for them, killing his opponents exemplified in the case of Saudi journalist Jamal Khashoggi are all just a few instances that show bin Salman is prepared to commit any crime to make sure that he will have easy accession to the throne.

Yet, there are some cases that keep the Saudi prince up at night; like the case of Saad al-Jabri, a former top Saudi intelligence officer, now living in exile in Canada.

The Prince vs. The Spy

This episode looks at some cases that keep the Saudi crown prince MBS up at night, like the case of Saad al-Jabri, a former top Saudi intelligence officer, now living in exile in Canada.

After his interview with “60 Minutes” on CBS NEWS, al-Jabri once again hit the headlines. The aim was to pressure bin Salman into releasing his son Omar and daughter Sarah, reportedly detained in an attempt to force him back to the kingdom.

In the interview, the former spymaster sent threatening signals to Riyadh that he could be a whistleblower if push comes to shove.

A former Saudi intelligence official says Crown Prince Mohammed bin Salman once boasted that he could murder then-King Abdullah in 2014.

Al-Jabri said bin Salman boasted in 2014 that he could kill King Abdullah using a “poisoned ring” he had acquired from Russia.

In less than a year, King Abdullah died and his half-brother Salman was crowned king.

Al-Jabri had already accused bin Salman of an attempt on his life because he knows “damaging secrets” about how the prince was catapulted to power.

Since the formation of the UNHRC in 2006, Saudi Arabia, despite having the worst human right record in the world, has been elected as a council member for four terms, between 2006 and 2012, and again from 2014 to 2019.

Al-Jabri asserts the Saudi Crown Prince has no empathy and considers him to be a person who “poses a threat to his people, to the Americans and to the planet.”

Essentially, Mohammed bin Salman came to power under his father as part of a coup. It was a coup that he had initiated. And you’ll remember that some of the most important members of the royal family were arrested and detained at the, whatever it was, the Four Seasons hotel, I think it was.

Many of them were stripped of billions of dollars of wealth. They were accused of crimes including corruption. Some died mysteriously in plane crashes; one was shot down on the border with Yemen.

I think these are the secrets; the secrets are that that this young man didn’t think twice about murdering members of his own family to take power.

The Firqat el-Nemr, or The Tiger Squad is a Saudi hit team under the direct guidance and supervision of the Crown Prince and de facto leader of KSA.

In one of his key lawsuits filed in August 2019 against bin Salman, the former intelligence officer said the prince sent the hit team that did away with Khashoggi to Canada to kill him but were intercepted and deported at Ottawa’s international airport.

We have reports that Khashoggi was screaming in agony as they were chopping him up while he was still alive. And why? Because he supported human rights and he, maybe, could be seen as an opponent of Mohammed bin Salman.

He had never done anything. He had never fomented a coup attempt. He didn’t write columns in the Washington Post in opposition to the Crown Prince. He just, you know, could have become an opposition figure at some point in the future.

And that was enough for Mohammed bin Salman to order his execution.

The Tiger Squad It was just after the horrendous murder of Jamal Khashoggi at the Saudi consulate in Istanbul that this name reached the ears of the public: The Firqat el-Nemr, or The Tiger Squad; a Saudi hit team under the guidance and supervision of this man, Mohammad bin Salman, the Saudi Crown Prince and de facto leader.

Observers say the attack on the exiled spy and his family is part of a bigger picture to muzzle the Crown Prince’s critics at home and abroad.

Al-Jabri was long an aide to Prince Mohammad bin Nayef, the former head of Saudi intelligence who later became heir to the throne before being deposed and detained by bin Salman in 2017.

Though loyal to his country, al-Jabri has been in self-imposed exile since then, fearing for his life.

The Saudi government has always been run by consensus, a consensus of the family. They have a family council which is made up of hundreds of senior princes and the family council is not even consulted anymore. Not since Mohammed bin Salman took power. And when he took power, what did he do? He arrested the crown prince. He arrested the Minister of Interior. He arrested the head of the Saudi intelligence service, not because they were corrupt, as he said, I mean, the Saudi royal family is the definition of corruption. He arrested them because he was afraid that they could eventually depose him and anybody who he believes could possibly, maybe, someday, be a threat is either arrested, exiled or killed?

On the other hand, the Saudi Embassy in Washington has made the statement that, “Al-Jabri is a discredited former government official with a long history of fabricating and creating distractions to hide the financial crimes he committed.”

Accusations of this kind are nothing new as over the past years many Saudi officials have been arrested on charges of financial corruption; critics say they are mostly trumped-up charges for political purposes.

The most well-known case happened in early November 2017 where about 400 of Saudi Arabia’s most powerful people, among them princes, tycoons and ministers, were detained in the Ritz-Carlton hotel. It proved to be the biggest and most extensive purge in the modern kingdom’s history.

These embezzlement and corruption charges against Saad al-Jabri and his children are made up, they’re concocted. What the Saudis have done is to arrest the man’s children in an attempt to force him back to the kingdom.

And we all know that the moment that he were to land in Saudi Arabia, he would disappear, and no one would ever see him or hear from him ever again. So he’s hoping that Western governments, especially Canada, where he is right now, and the United States, with which he’s had a long and close relationship, can pressure the Saudi government to have his children released.

They’ve done nothing wrong. Their only crime is to be his children.

Meanwhile, Hissah Al-Muzaini, another daughter of Saad Aljabri, says Saudi officials were trying, as part of revenge against her father, to lure her into the kingdom’s consulate in Istanbul, where Khashoggi was hacked to pieces.

The saga of the prince and the spy is a tell-tale sign of what might be going on inside the kingdom.

When an influential and loyal Saudi spymaster and his family who have close ties in Washington and the CIA are not immune from the Saudi Crown Prince’s whims and wrath, what might happen to Saudi dissidents inside the kingdom?

MBS should have been repudiated in Khashoggi case: Political commentator

US President Joe Biden has reverted to “the sort of opportunism,” that he condemned while campaigning for the 2020 election.