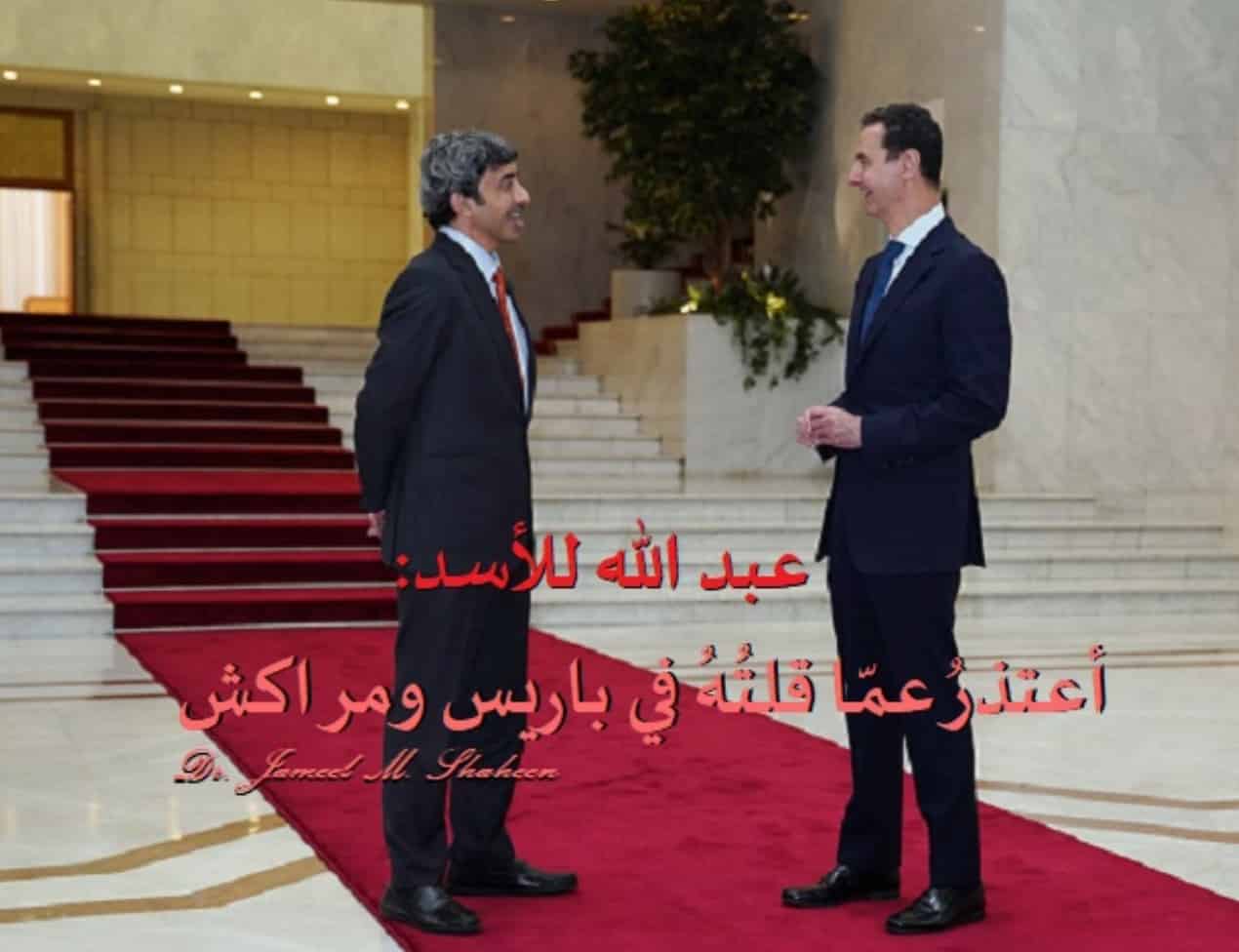 [ Editor’s Note: The outreach moves from Arab League countries have been in motion with Syria for some months now. At first nothing was published until some preliminary understandings were reached so as not to become another failed Mideast de-escalation effort.

The first big step will be to bring Syrian back into the Arab League, but the trick will be what will be wanted in return. That list might include the removal of Turkish and Iranian forces. There was no mention of the Russians, which the US would certainly want out.

I can’t see Erdogan making a voluntary withdrawal as he is already under growing political pressure at home with his bad economy, endless foreign adventures, and rumors of declining health, a la Trump.

So far Erdogan’s threatened offensive in Idlib and in the NE Syrian Kurdish regions seems to be stalled. The usual sparing is going on with shellings and drone attacks.

But to sweeten the pot, the UAE offered to build a photovoltaic power plant outside of Damascus. These plants take years to build, so at this point everything is all talk, which can easily go up in smoke at any moment.

There has not been a peep out of the US on any of this, but we see Iran definitely open to deescalating tensions in the Gulf. For now, we will have to monitor the moves until we know which ones were real and which were diversions… Jim W. Dean ]

The United Arab Emirates severed relations with Syria in February 2012, specifically at the request of the United States. In March 2018, it reopened its embassy in Damascus and led a campaign to return Syria to the League of Arab States. This campaign ran into opposition from some Arab and Western countries.

With Joe Biden assuming the seat of government in Washington, he began to ease the burden on his country, handing over several files to other countries to devote themselves to his war against China, and his administration’s awareness of the political failure of the United States to resolve several files, including Afghanistan and currently its failure in the separatist project in the “Syrian island,” and this is what We’ll talk about it later.

Here, some Arab countries began to move towards Damascus, including Jordan, whose King Abd al-Thani called the Syrian president for the first time since the start of the war on Syria, and Iraq, and to some extent, “shy and tied” Egypt, moved.

Sheikh Abdullah bin Zayed, the UAE Minister of Foreign Affairs, who visited Damascus yesterday, Tuesday 09.11.2021, is the same one who headed his country’s delegation to the “Friends” conferences of the Syrian people in Paris, July 06, 2012 and Marrakesh, Morocco, December 2012.

He literally said before the delegations and leaders of 100 countries that participated At the conferences, led by the United States, the European Union and the Arab countries:

There is the worst, as he called for military intervention under Chapter VII in Syria. Some have called for more sanctions, but will the sanctions change the behavior of the Syrian regime and put an end to its crimes and massacres against the Syrian people? When will we stop watching and talking only?

In the final statement, the UAE, along with Turkey, Qatar, the United States and dozens of other countries called for the UN Security Council to urgently issue a binding resolution under Chapter VII, that is, the use of “military force” to ensure a political transition in Syria.

Sheikh Abdul bin Zayed is the same one who was in Damascus yesterday shaking hands with Syrian President Bashar al-Assad, so what happened?

In the second picture, the body language says: “I apologize for what I said earlier at the Paris and Marrakesh conference.”

Although the UAE’s position on the war in Syria, politically, was not better than the rest of the Arab countries, with the exception of only some of them such as Iraq, Algeria and Lebanon. But impartially, Abu Dhabi’s support for terrorists, militarily and financially, was the lowest among the Gulf states compared to Saudi Arabia, Qatar and Kuwait.

According to the statistics of the Ferrell Center for Studies, which were published for three consecutive years, the last of which was on February 14, 2017, and were read at the United Nations:
“The percentage of Arab fighters constituted 54% of the total foreign fighters who fought against the Syrian army in Syria, and the UAE’s share was the least in number among the Arab countries”.
Were the Emirates in Syria with an Arab and international mission? There is no doubt that the UAE’s step is important, and it would not have been without the American green light, even if Washington claims that it denounces this visit. The news is talking about an official invitation to President al-Assad to visit the UAE, and this is to be expected.
In addition, the possibility of Assad attending the next Arab summit in Algeria in March 2022 is a possibility, or at least a large Syrian delegation. So, the UAE is on an Arab mission to return Syria to the Arab League, and more correct, return the Arab League to Syria.
The international mission is mainly to weaken the Iranian influence in Syria, and with it the Turkish influence, by withdrawing Syria to its Arab surroundings and keeping it away from Tehran and Ankara, which is not originally close to it.
This mission is welcomed by the United States, the West, and to some extent Russia, but it will run into opposition from Iran and Turkey, which have bad relations with the UAE and Saudi Arabia at least. The opposition will also be among some influential inside Syria. These influential people will not give up so easily, why?
The statement of the Presidency of the Republic said about the talks they had included strengthening investment partnerships, and this falls into the category of reconstruction and therefore international supervision that will not allow for a large scale of corruption or monopoly.
They know that their kingdoms will be determined as soon as the giant companies begin to rebuild, so they will defend those kingdoms to survive. Tel Aviv, in conjunction with the visit, was bombed “exhibitionally,” and this is an indication that it is with the Emirati mission to curb the Iranian role in Syria, and not the other way around, and demands Damascus to respond.
What awaits Syria if the UAE succeeds in its endeavour?
The Syrian leadership is aware of the necessity of walking between two paths in order to maintain a balance between its relationship with Iran and the Arab countries, and it has “played it right”…
That is why if Abu Dhabi’s move was successful without hindrances, and this is difficult, we will see the “disintegration” of the Arab boycott contract first. Jordan is waiting and with it Egyptian President Abdel-Fattah El-Sisi, then Saudi Arabia and Bahrain will be.
As for Qatar; She will refuse at first, but she will swim with the current, reluctantly, hoping to be a mediator between Ankara and Damascus after the failure of the rest of the countries.
As for the UAE’s relations with Tel Aviv, I think that Damascus avoids going into this, but it will not ignore it.
As for Lebanon, its crisis continues, with the difference that Syria may be the next mediator between it and the emirates, and then Saudi Arabia, to resolve the “fabricated” dispute following the statements of Minister George Qardahi.
On the level of living, and this is what concerns most readers of the Ferrell Center for Studies, we say:
“Do not raise the expectations too much, but let us watch with cautious optimism. The UAE is not the savior, and no other country will be.”
Saving Syria’s livelihood starts from the inside and the inside first, and as we have said many times and repeat: “Fighting corruption” of all kinds and a comprehensive reform that replaces most of crooks with honorable one as has been going on for many years.
Conversely, restoring relations with Arab countries in principle will ease the severity of the external sanctions, thus increasing trade movement and declining the dollar’s ​​price, meaning, “There should be” an improvement in living standards that will come within months.
Dr. Jamil M. Shaheen, Ferrell Center for Studies. 10.11.2021