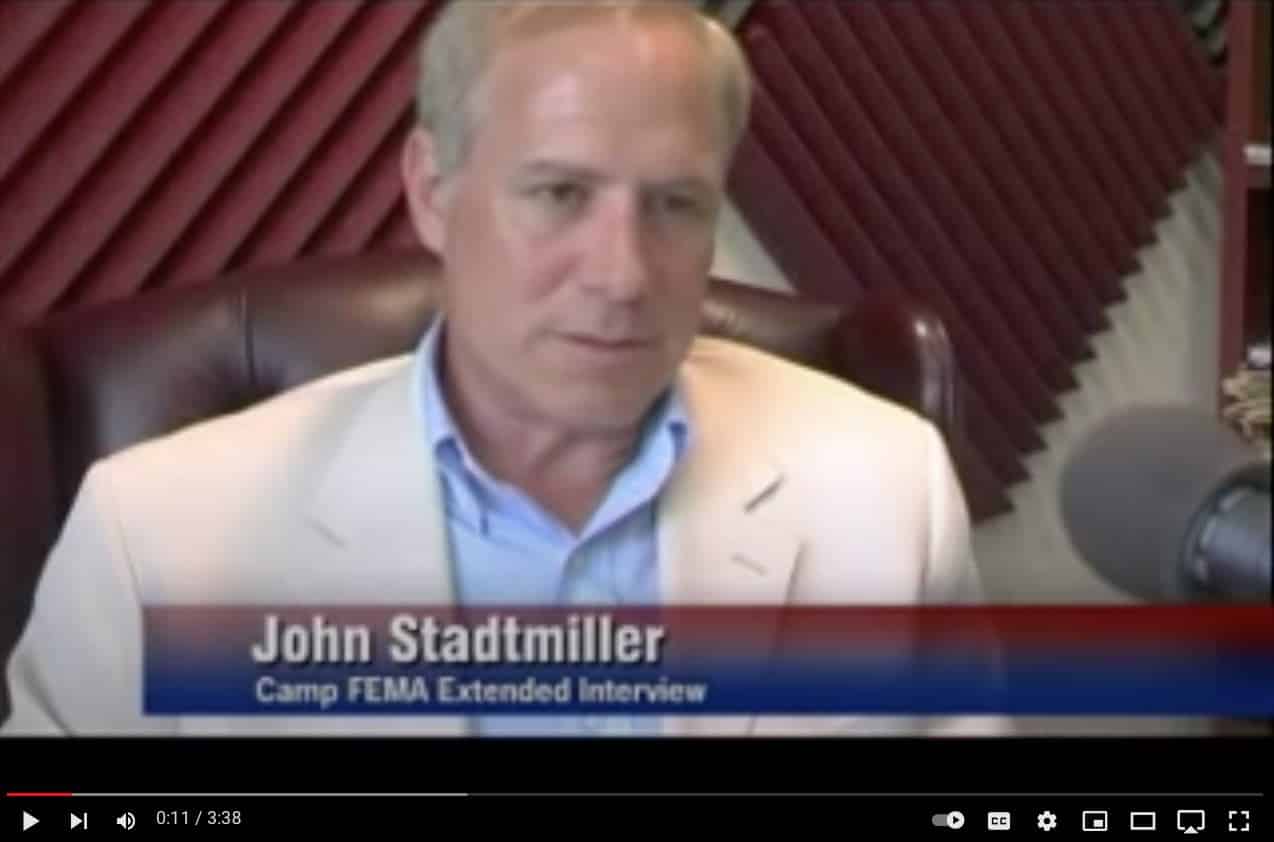 Just two weeks after the death of another alternative radio legend, the great John Shuck, our airwaves lost another hard-hitting voice of truth and justice: John Stadtmiller, who passed away on the memorable date of the 5th of November. John Stadtmiller was the founder of the Genesis Communications Network (GCN) which “made” Alex Jones, and then Republic Broadcast Network (RBN), Alex’s Austin-based competition.

A pioneer of 1990s patriot radio, Stadtmiller exposed the 1995 Oklahoma City bombing as a false flag operation run by a mobbed-up, Zionist-connected wing of the FBI. Six years later, he quickly saw 9/11 for what it was, another false flag by the usual suspects, and picked up the torch from William Cooper, who had been killed by “law enforcement” on November 6, 2001—perhaps because Cooper had exposed 9/11 before it happened as well as in a 10-hour marathon broadcast on the day itself.

In 2006, as the 9/11 truth movement was peaking thanks to the generosity of philanthropist Jimmy Walter and the emergence of Scholars for 9/11 Truth, John Stadtmiller had a bright idea: Instead of just bringing on 9/11 truth movement personalities as radio guests, why not let them host their own shows? Not long afterward, several guest experts, including Webster Tarpley, various makers of Loose Change, Jim Fetzer, and yours truly had become radio hosts.

In retrospect, I have to give Stadtmiller credit for sparking my transition from the academy to alternative media.

My first radio hosting gig seemingly appeared out of nowhere. In early November 2006, I was getting close to the tail end of a six-month siege by mainstream media. CNN and other big outlets were sending reporters to sit in on my Introduction to Islam class at the University of Wisconsin, where I was under fire for supposedly “teaching conspiracy theories” (which wasn’t true, but that’s another story).

One evening in early November the phone rang. It was Jim Fetzer. He said he was double-booked and couldn’t host his radio show, which started in something like fifteen minutes. Could I sub for him?

I told him I wasn’t sure I could ad-lib for a full hour. Don’t worry, Jim said, the guest is already booked: It’s former mainstream newspaper journalist John Kaminski.

Shortly before the top of the hour my phone rang. It was John Stadtmiller. He explained to me how it worked—wait till the bumper music fades, then start talking, introduce the guest, and when you hear more bumper music it means an ad is coming up.

I had a good conversation with Kaminski—for the first 35 minutes. Then I asked him about Jews. He went into an over-the-top anti-Jewish tirade. It seems that Kaminski’s unhappy experience in mainstream media had something to do with Jewish domination of that particular field of human endeavor, and the upshot was that ever since then he bore, shall we say, a certain animosity to The Tribe that Dare Not Allow Anyone to Speak Its Name.

To get a sense of where Kaminski is coming from, get a load of his vitriolic attack on (ethnically but not ideologically Jewish) Alan Sabrosky, who recently retired from being my radio guest and after penning a postmortem about why the 9/11 truth movement failed.

“How much truth can you expect from a Jew writer writing on a Jew website telling us why we couldn’t catch the Jews after they blew up and knocked down the Twin Towers on 9/11/2001? Answer: None. Reason: Because Jews control the media — it has always been that way throughout the 20th century and now is stronger than ever into the 21st.

“In fact that same reason that we couldn’t nail the Jews for demolishing the World Trade Center towers in 2001 and accelerating the New World Order’s war on the world is now currently at play as the reason we can’t stop the Jews from destroying world society in 2021 with their fake pandemic (Jew media), poison vaccines (Jew drug makers) and illegal worldwide quarantines (Jew politicians and judges).

“Same reason in 2021 as existed in 2001 — the truth is murdered to obscure the death toll of a Jew scam to control the whole world. Jews totally control mainstream media, totally control the murderous profit oriented medical profession, and totally control the bought off whores who call themselves either politicians and/or news presenters (there is no difference), so that the public, with all their apparent variety of news sources at their disposal, are getting the same story no matter in which direction they turn. The Jews’ story.

After Kaminski started ranting like that, I tried to have a reasonable conversation, but wasn’t getting anywhere. At the commercial break, John Stadtmiller got in my ear: “Let’s throw this guy off the air, he’s way over the top, he’s gonna sic the ADL on my ass again!” I agreed. During the remaining fifteen minutes of the show I monologued, explaining why I found Kaminiski’s hyperbole (a) offensive and (b) counterproductive for 9/11 truth.

So that was my introduction to radio: Working with John Stadtmiller to defend the Jews from the likes of John Kaminski. But the ADL’s motto is “no good deed goes unpunished,” so before long I was in their crosshairs too, just like Stadtmiller.

“I would rather pour gasoline on myself and light it than speak to anyone in your ‘organization,'” he wrote in an E-mail.

John Stadtmiller apparently wasn’t always the easiest guy to get along with. There are stories of him drinking and waving loaded guns around and generally alienating people. I found him cantankerous but not all that hard to deal with—including when I met him in person—right up until he fired me without explanation, via a short email ostensibly from his wife. I didn’t really mind, since I already had too many radio shows at that point. (I was also on GCN and WTPRN/AFR, had an offer from Rense, and then gravitated to non-commercial No Lies Radio.) But it was a weird way to end a work relationship.

I always hoped to get another chance to talk to John…maybe run into him in Austin or something. I guess that won’t happen now, except maybe in Alternative Radio Paradise (that luscious oasis garden where the good guys go to loquaciously expose the New World Order while sipping etherial wine in the company of beautiful houris, insha’allah…)

On the Thursday October 21st episode of his last-ever broadcast, two weeks and one day before his death on November 5, 2021, John Stadtmiller, owner of Republic Broadcasting Network, literally forecast his impending death.

“So we’re on the John Stadtmiller death watch?” he said, as he described a rash which appeared like “cheese bubbling up” on his arm; a rash that he said had persisted for at least a month. He added that he should go to the doctor but didn’t have a lot of money, what could cost thousands of dollars in tests, excetera. He said that he could go to the VA but all they want to do is shoot him up with a vaccine.

At minute 33 after the half-hour break as the bumper music played ‘Big John,’ Stadtmiller said “thanks for playing that on the heels of me making this announcement, I’m gonna finish out this hour with Roger Landry, and Steve Elkins is going to take over for me in the second hour; and I don’t think I’ve ever done this in 33 years. I am sitting here and I am just bubbling up, like I said, like cheese on a pizza in a damn oven. This is- this is insane. At any rate…” (sigh)

…At minute 56 John says “I’m watching my forearm turn into one giant bubble. This is so much fun. I – I just love witnessing things that I have no idea what the hell is going on. Aah boy. At any rate. Yeah…”

I just learned of John’s death today. I’ve haven’t seen John for several years. I did go help him in Round Rock with an internet issue he had probably 8-10 years ago, that was the last tome I spoke to him.
I was the chief engineer at Republic Radio International in the late 90’s. I can tell you that your article is incorrect saying he founded Genesis Communication Network. John was the co-founder of Republic Radio International along with Mark Koenke. It was bought by someone else and John was ousted for poor leadership, The equipment was sold to Ted Anderson who had already incorporated Genesis. Ted did so based on Midas Resources program that was on RRI and his future plans. John was not even on air at the time Genesis bought the equipment, (and not the name or debt) at the time.
Over a weekend I rebuilt studios and had everyone back on air. Later John asked to have a show on air at Genesis, they agreed.
John in no way founded Genesis Communication Network, but he was co-founder of Republic Radio International.
The interesting story of Alex Jones was also not something John did.
That is a very long story about how a 3rd party investor had revenue checks for air time directed to him in Scottsdale AZ. When I realized he had his investment returned we started to stop that and cut him out. He redirected his show to WWCR directly and we had an open time slot. I suggested Alex Jones.
At that time Alex was on KJFK and would go into a janitors closet with a phone after his show there and do an hour on satellite only.
When Ted Anderson bought the equipment and it became Genesis, he gave Alex both a daytime slot, and a evening slot, and bought WWCR air time for both. John had nothing to do with it, he wasn’t even on the air at that time.
This is the short version. I know all the details, I was there. Not to take anything from John, just saying he never started Genesis.
Paul Wright
ATTENTION READERS
Due to the nature of independent content, VT cannot guarantee content validity.
We ask you to Read Our Content Policy so a clear comprehension of VT's independent non-censored media is understood and given its proper place in the world of news, opinion and media.