[ Editor’s Note: This is a big bummer for the HTS guys wanting to stay warm by hanging out at the station during this time of year, when they know that one of these shells will definitely be a one shot kill…on them. 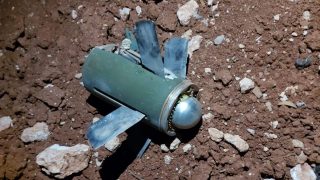 That kind of takes all the fun out of torturing suspects when everybody gets bored.

But it gets better, as Syrian intel has always have good intel in occupied areas. It can find out who the upper jihadi girlfriends are.

They usually like to sleep around as a security measure. Years ago such intel was used if Damascus wanted to snatch someone. But with this high tech laser artillery, they don’t have to worry about all that could go wrong inserting a hit or a snatch team and getting it out.

The limitation of these weapons is the need for 152mm artillery, and second, defending them from Turkish drones, where you know they are going to be a prime target to take these out. This is why the side with the most drones, including combat drones, has great advantage.

These tipped the tide in the last greater Idlib battle, where Turkey flooded its regular army troops into the region and committed its entire drone force to take out Syrian key weapons positions and air defense positions that are expensive to lose, as replacements may not be available for some time… Jim W. Dean ]

The pinpoint artillery strikes targeted militants’ positions in the outskirts of the town of Taftanaz in the eastern countryside of Idlib. Al-Qaeda-affiliated Hay’at Tahrir al-Sham (HTS), the de-facto ruler of Greater Idlib, maintains a large presence in this area.

Syrian opposition activists shared video footage of the shelling as well as photos showing the remains of at least one Krasnopol round.

The 2K25 Krasnopol, which is guided by a semi-active laser, can be fired by most 152 mm artillery guns. The advanced round has a range of 20 to 30 km and can hit its targets, that can be illuminated from the ground or the air, with top accuracy.

The SAA artillery strikes were likely a response to recent violations of the ceasefire in Greater Idlib, which was brokered by Russia and Turkey more than a year ago.

According to the Russian Reconciliation Center in Syria, two service members of the SAA were wounded in indirect fire attacks carried out by HTS on November 9.

Meanwhile, Turkey continues to reinforce its troops in Greater Idlib, not to implement the ceasefire agreement, but to stop any operation by the SAA and its allies. Ankara wants to maintain the status quo in the region that has became a safe haven for many wanted terrorists.