[ Editor’s Note: I had been wondering if the normally slick and careful Kevin McCarthy was going to sleepwalk a destructive intra-party GOP fight over infrastructure money for Republican districts in an election year that will benefit their own constituents for a generation.

I mean after all, the bill is a done deal, and the party is almost completely in the hands of The Donald, a 300-pound guy that is not going to be around forever, and McCarthy knows he would be in the catbird seat for running for president from the Speaker of the House seat someday, which could even be 2024.

Sure the Dems will campaign that they got an infrastructure bill through when Trump could not because McConnell had the door shut. But The Donald will certainly not sweat the small issues to stay focused on his staying out of jail by getting back in office somehow in 2024.

I just Googled and found this: ‘No American under federal indictment has ever won the presidency, and George W. Bush is the only person with a criminal conviction — he was fined after admitting drunk driving — to serve in the office.’

McCarthy and Trump share one common character flaw, the ‘It’s all about me’ one. He wants, and he will do anything to snag being Speaker of the House next November, knowing that at his age and with his schmoozing skills, he could end up as a leader for a long time.

If the combination of redistricting and sending Democrat election workers into hiding over fear for their lives allows the Republi-Grifters to control ALL future election recounts, we will have a democracy in name only.

The Supreme Court at that time is going to make that final call, its most historic in the 21st history. Whether it will be a negative or positive one remains to be seen, but I do tend to feel that, at the end of the day, to support a serial criminal regaining the presidency so he can be an autocratic ruler may be a bridge to far for them.

Can you imagine Rudy, Sidney Powell, and Mark Meadows as new Supreme Court Justices someday, how the future of America would change forever? Thus ends my cheery missive for today… Jim W. Dean ] 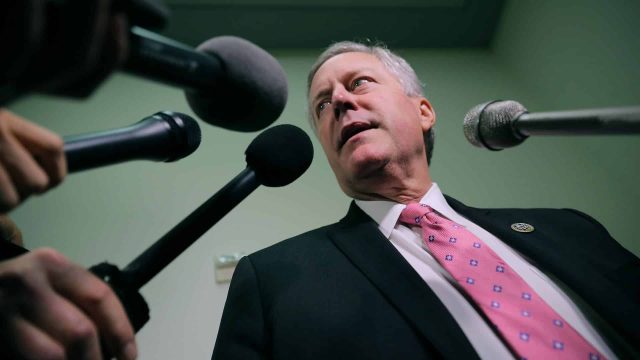 House Minority Leader Kevin McCarthy on Tuesday privately urged House Republicans to stop seeking to punish their 13 colleagues who voted for the bipartisan infrastructure bill — at least for now.

With a vote on Democrats’ social spending plan likely soon, McCarthy cautioned that now is not the time for GOP infighting. But could the 13 House Republicans eventually face internal discipline for helping President Joe Biden get a win? Multiple sources say McCarthy left that open-ended.

During a closed-door GOP meeting, McCarthy and others tried to calm the waters as some ultra-conservatives pushed for Republicans like New York Rep. John Katko to be punished for voting in favor of the infrastructure bill. (Reminder: 19 Republican senators backed this bill, while House GOP leadership formally whipped against it.)

Some want to see Katko kicked off of his top GOP spot on the House Homeland Security Committee, along with any other pro-infrastructure voters who hold key spots on committees and subcommittees.

But other Republicans warned of the precedent that could be set by sanctioning members for votes that buck leadership. (*Cough, cough*: They’re looking at you, House Freedom Caucus members.)

In addition to trying to shield these 13 Republicans, McCarthy is also dealing with a Democratic push to punish Rep. Paul Gosar (R-Ariz.) for posting an anime video last week that depicted violence against two prominent Democrats.