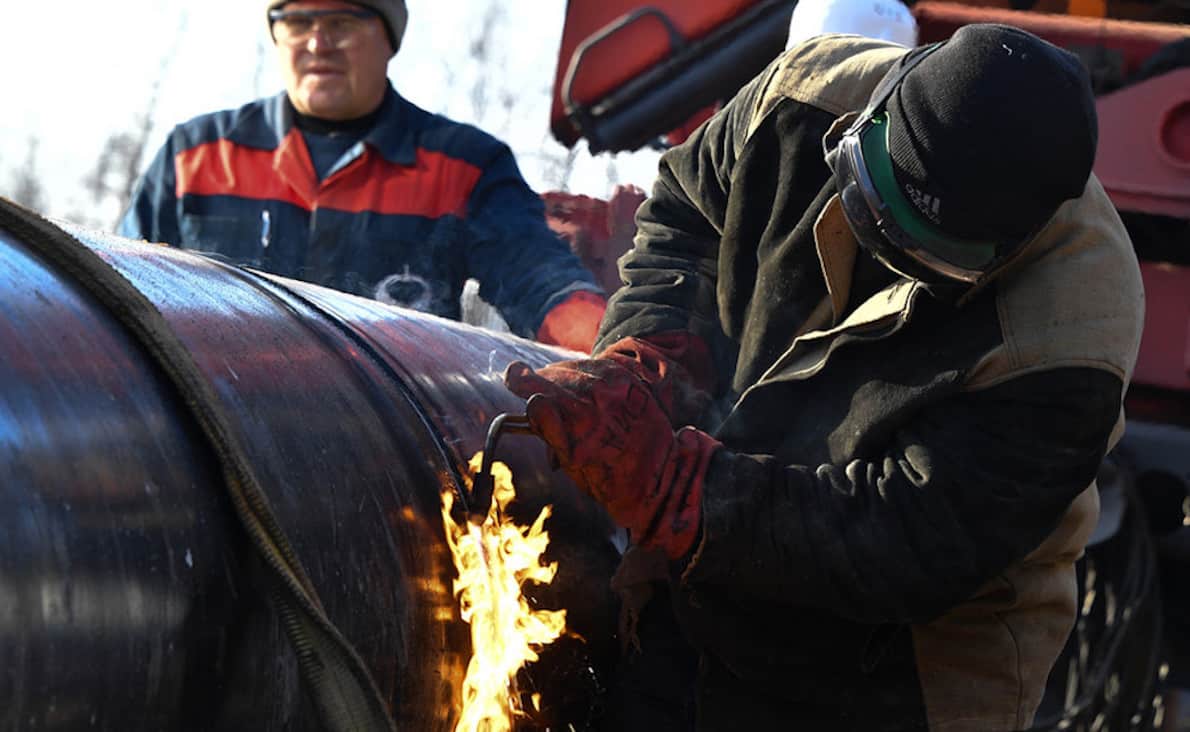 On the cover: A welder repairs a part of the Friendship pipeline outside the village of Romanovka, some 230km south east of the Belarusian capital, Minsk. © Sputnik / Viktor Tolochko

The unexpected interruption of energetic supplies from Russia to Europe due to unscheduled extraordinary maintenance works (details below in Russia Today article) represents a serious alarm bell for the European Union.

The suspension of the supply of this important resource, albeit temporary, takes place after Germany stopped the certification of Nord Stream 2, immediately increasing the international price of gas, as highlighted by the BBC.

It is not known whether the unexpected interruption in Belarus was really determined by the need for technical interventions on the pipelines or whether it is a retaliation against the threats of new sanctions received by the European Union which accuses President Aljaksandr Lukašėnka of having triggered the ” hybrid war ”of migrants on the European borders with Poland.

On the geopolitical level, this temporary suspension of supplies nevertheless appears to be a warning because it will have immediate repercussions on the price of gas in the Old Continent.

Russia and Belarus have strongly rejected the accusations of speculating on the “hybrid war” which has instead been carefully analyzed in the military plan of the CEPA think tank in Washington developed with the EU and NATO leaders in which the Suwalki corridor appears to be of great importance, a few kilometers from the Kuznica border crossing between Poland and Belarus.

Regarding the accusations of using migrants as an instrument of pressure at European borders, an excellent response came in a recent press conference from Maria Zakharova, spokeswoman for the Foreign Minister of the Russian Federation, Sergei Lavrov.

«We have repeatedly said that the blame for yet another wave of the migration crisis in Europe should not be shifted to Minsk. This crisis did not start in November or in summer or spring of this year. This is an exodus of people from the countries that “developed democracies” decided to whip into shape. It has been in the active phase for several years now” Zakharova said.

«This crisis was triggered by Western armed interference in the Middle East and North Africa and the aftermath of the failed operation in Afghanistan. What happened in that country led to new rounds of the migration crisis that has been in the making for years. This is news only for someone who has never heard of Afghanistan. If you know, even superficially, what has been going on in the world in the past few years you are bound to know about the root causes of this crisis» added Russian spokeswoman affirming what has been repeatedly highlighted by Gospa News reports on civil wars and tensions in the Middle East: from Syria to Iraq, from Libya to Lebanon.

by Russia Today
Belarus has announced “unscheduled repairs” are needed on a branch of the ‘Friendship’ pipeline carrying oil supplies from Russia through the country to a number of EU states, insisting that maintenance work will take three days.

In a statement issued on Wednesday, Russian energy export giant Transneft said supplies could face short-term disruption. Spokesman Igor Demin told journalists he had been informed the impromptu repair work should be finished by the weekend. The pipeline connects oil fields in Central Russia to consumers in Poland, Hungary, Czechia and Germany.

READ MORE: Putin warns Belarus of major fallout if it cuts off gas to EU

The news comes just days after Belarus’ embattled leader, Alexander Lukashenko, warned that his country could cut off gas flowing to Central and Western Europe in response to a worsening row over illegal migration on the border with Poland.

Thousands of refugees have set up camps along the frontier, with the EU accusing Minsk of putting on flights from troubled nations like Syria and Iraq, and encouraging desperate people to try to cross over in retribution for sanctions levied against its government. Belarus denies the claims, insisting that it is simply no longer able to prevent migrants reaching the border.

Lukashenko said last week that, when considering potential future sanctions, European leaders should remember that he could “cut off” energy supplies through the Yamal-Europe pipeline, which delivers gas from Siberia to Germany and other EU states.

The suggestion that the country could begin restricting Russian gas exports prompted criticism on Saturday from President Vladimir Putin, who said that “nothing good will come” from the suggestions. “It will be a violation of our transit agreement, and I hope it will not come to that,” the Russian leader added.

On Monday, European Commission President Ursula von der Leyen asked EU member states to approve additional sanctions against Belarus over what she said was a “hybrid attack” on the bloc. Meanwhile, Lukashenko has accused Brussels of engaging in a hybrid war of its own against his country by supporting Belarusian opposition figures and media outlets based abroad.