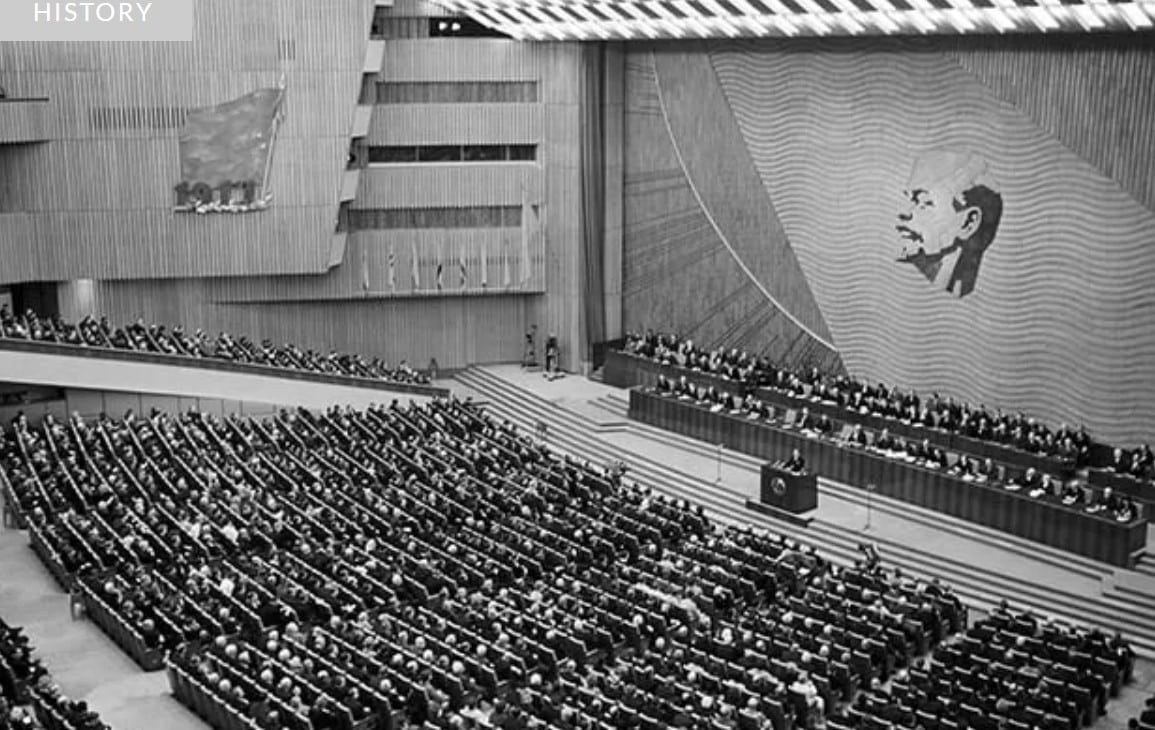 Sourced through: EUROPE RENAISSANCE – If we are to inform and inspire others your much-appreciated donations are vital. Help us to avoid catastrophe: refuse to be a mere spectator. Contact Michael Walsh [email protected]

Forget you are living in democracies; you now wake up after the globalist coup. Democracy is dead. Suck it up, sink into the abyss or shake your complacency off. In 1917 the people of Imperial Russia went to sleep in and woke up in Bolshevik Russia. Now you know how it feels.

Just like Vladimir I. Lenin died in 1924, it turned out that the second revolutionary in the party, comrade Leon (Lev Bronstein) Trotsky was also a traitor. 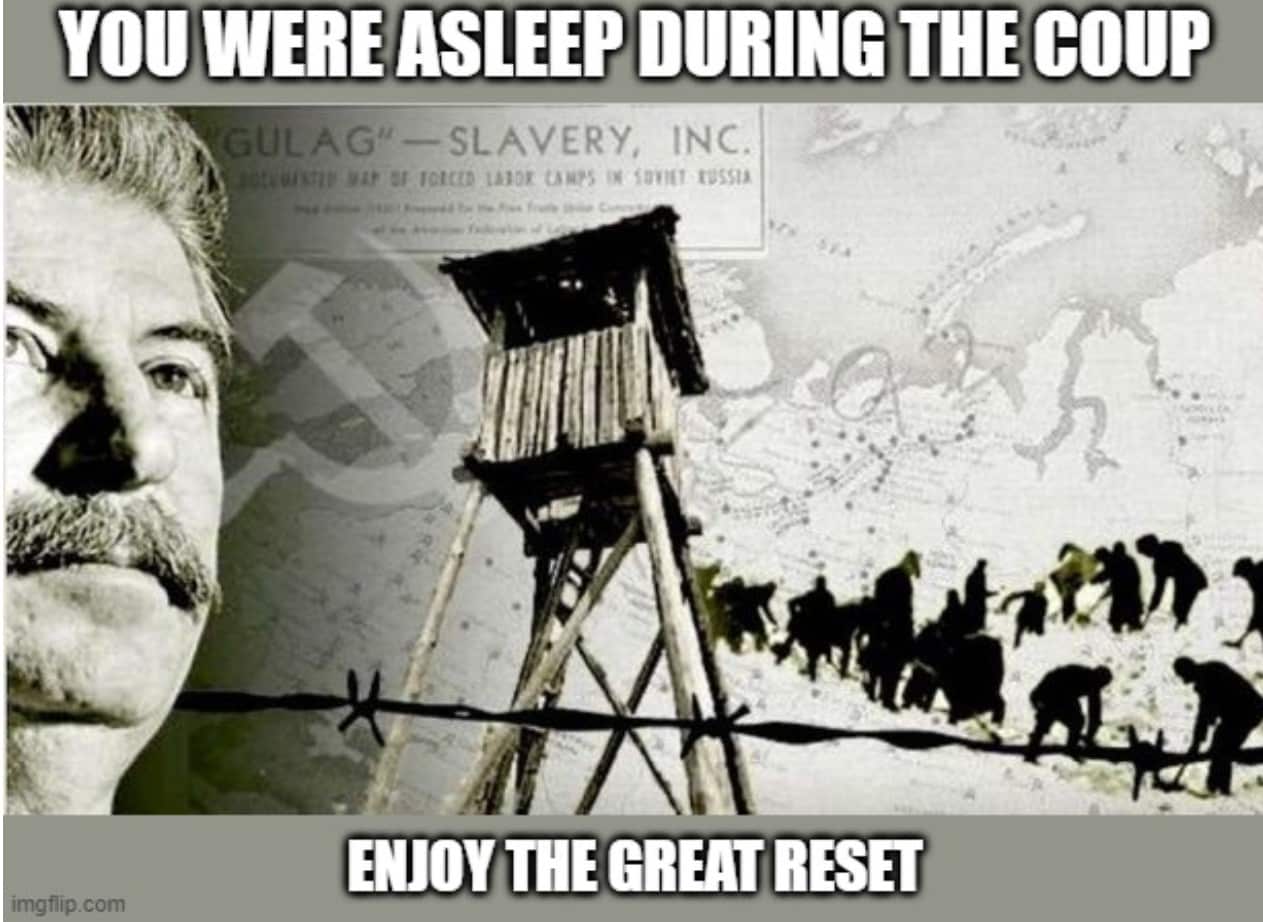 The godfathers of godless Bolshevism, Lev Kamenev, Grigory Zinoviev, Nikolai Bukharin and Georgian Josef Stalin overthrew Leon (Trotsky). The Jewish Mafia of Moscow expelled the violent foaming at the mouth insurrectionist from the USSR in 1927. But after a couple of years, it turned out that Lev Kamenev, Grigory Zinoviev and Nikolai Bukharin were also enemies and pests. 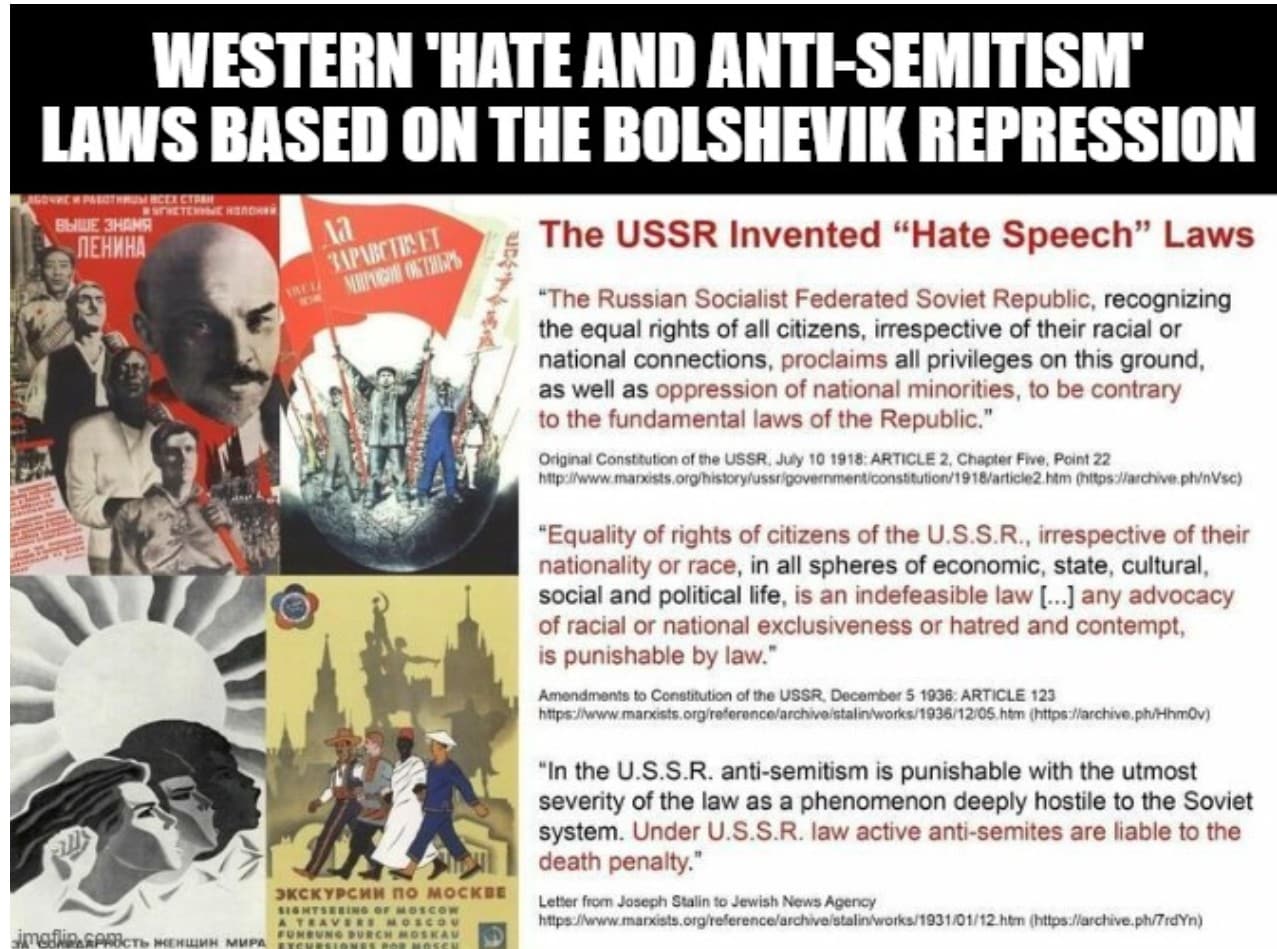 Then the valiant comrade Genrikh Yagoda, another Jew fell screaming in a hailstorm of small arms fire. Genrikh Yagoda was head of the notorious NKVD and charged with the martyrdom of 10 million Christians arrested in 1936. Don’t expect to read about his crime of fashion in the Western Press. We loathe him they love him.

‘When Michael Wharton, then a British Broadcasting Corporation (BBC) producer and later satirical writer for the Daily Telegraph (Peter Simple) saw some members of a BBC TV camera crew sobbing he asked them why they were crying. They replied ‘Joe Stalin has died’. Wharton replied ‘it’s a pity he was ever born!’ They never spoke to him again.’ 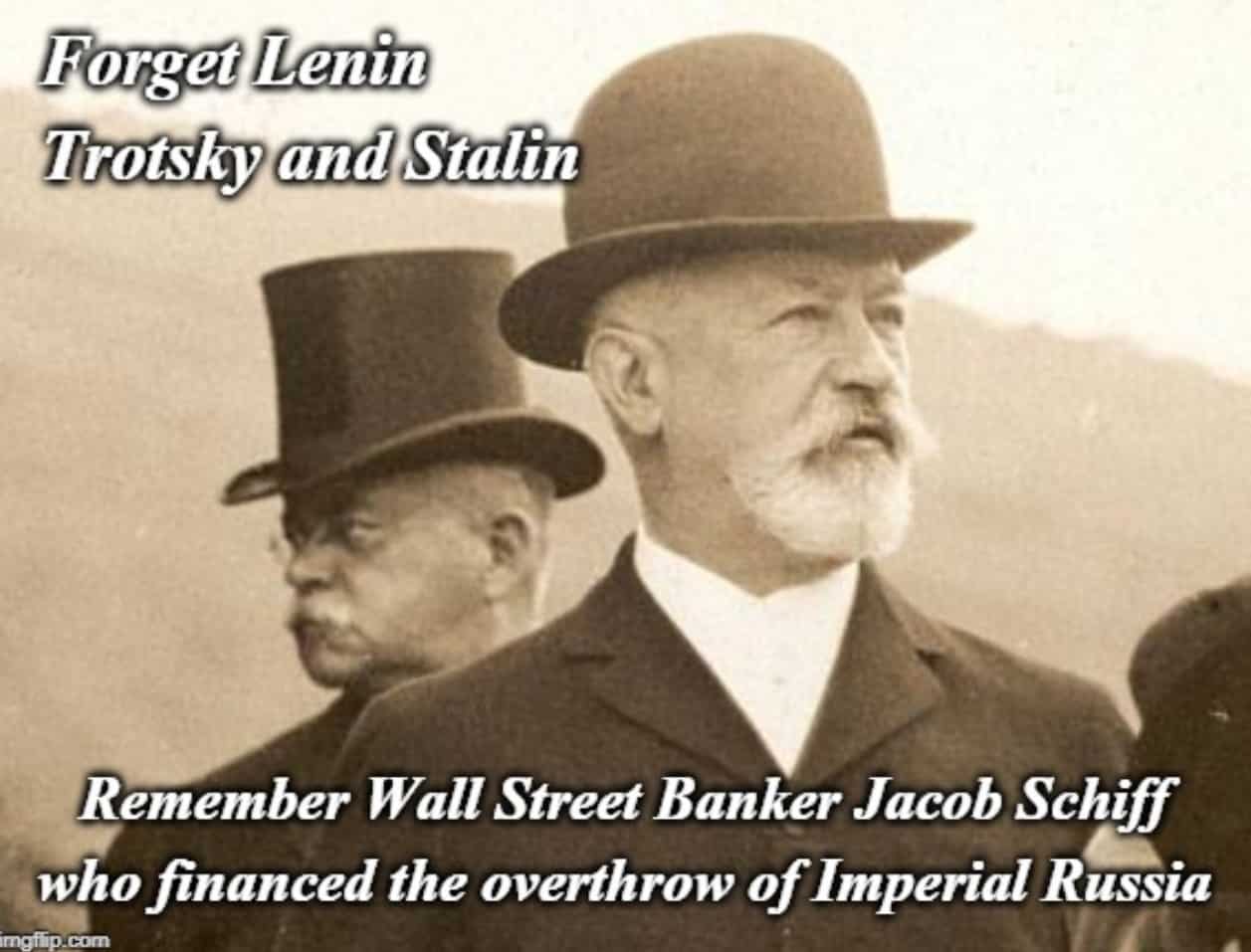 Genrikh Yagoda had been arrested as an enemy agent by his former comrade the smirking Nikolay Yezhov in 1937. But after a couple of years, it turned out that Nikolay Yezhov was not much of a comrade either, but a miserable ordinary traitor and an enemy agent. And it was the same Yezhov arrested Lavrentiy Beria in 1938. Yes, after the assassination of Joe Stalin in 1953, everyone in the USSR was told that Lavrentiy Beria is also a traitor. So, Georgi Zhukov arrested Beria in 1953. 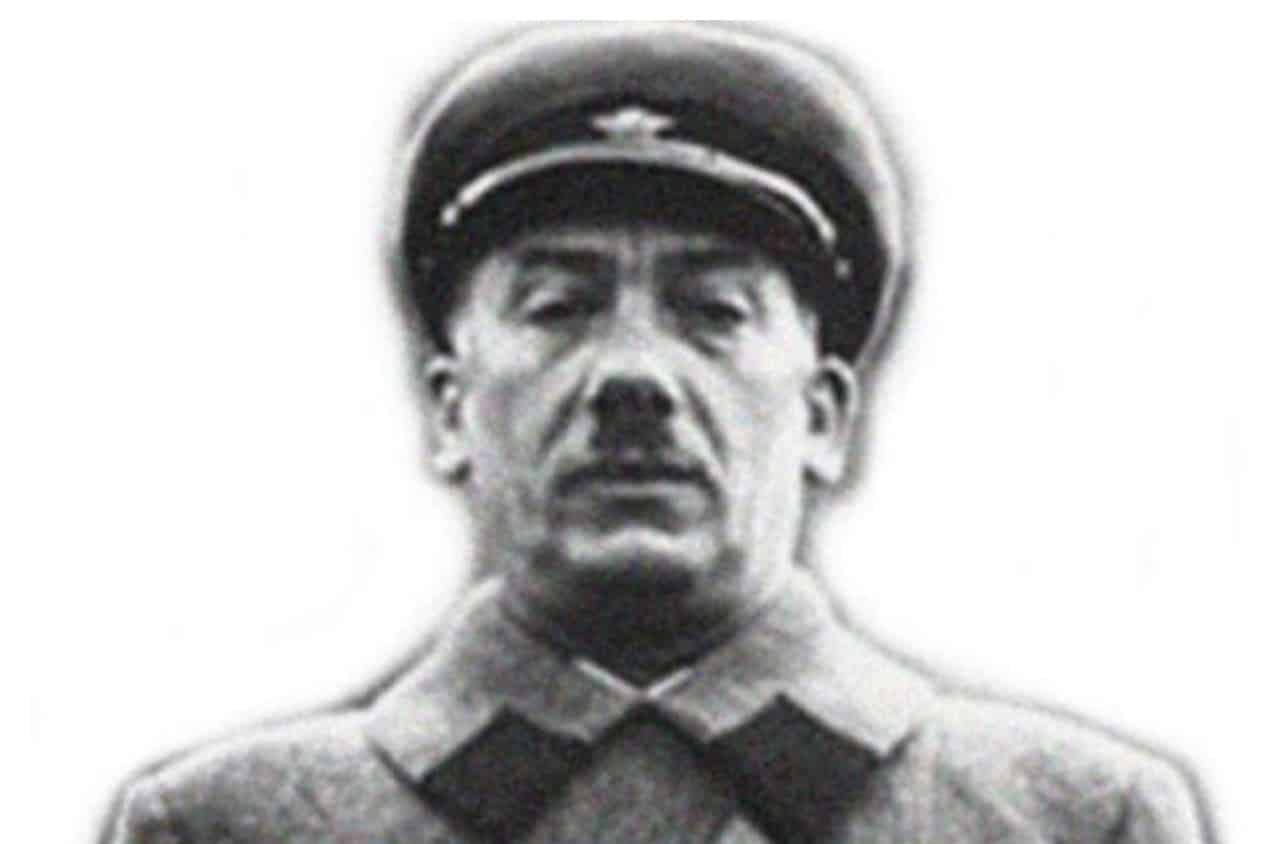 But soon afterwards Nikita Khrushchev learnt that Marshall Georgi Zhukov is an enemy and a conspirator too and sent the former Marshal Zhukov to retire in the Urals. A sort of comfy Gulag for the pipe-smoking hierarchy. 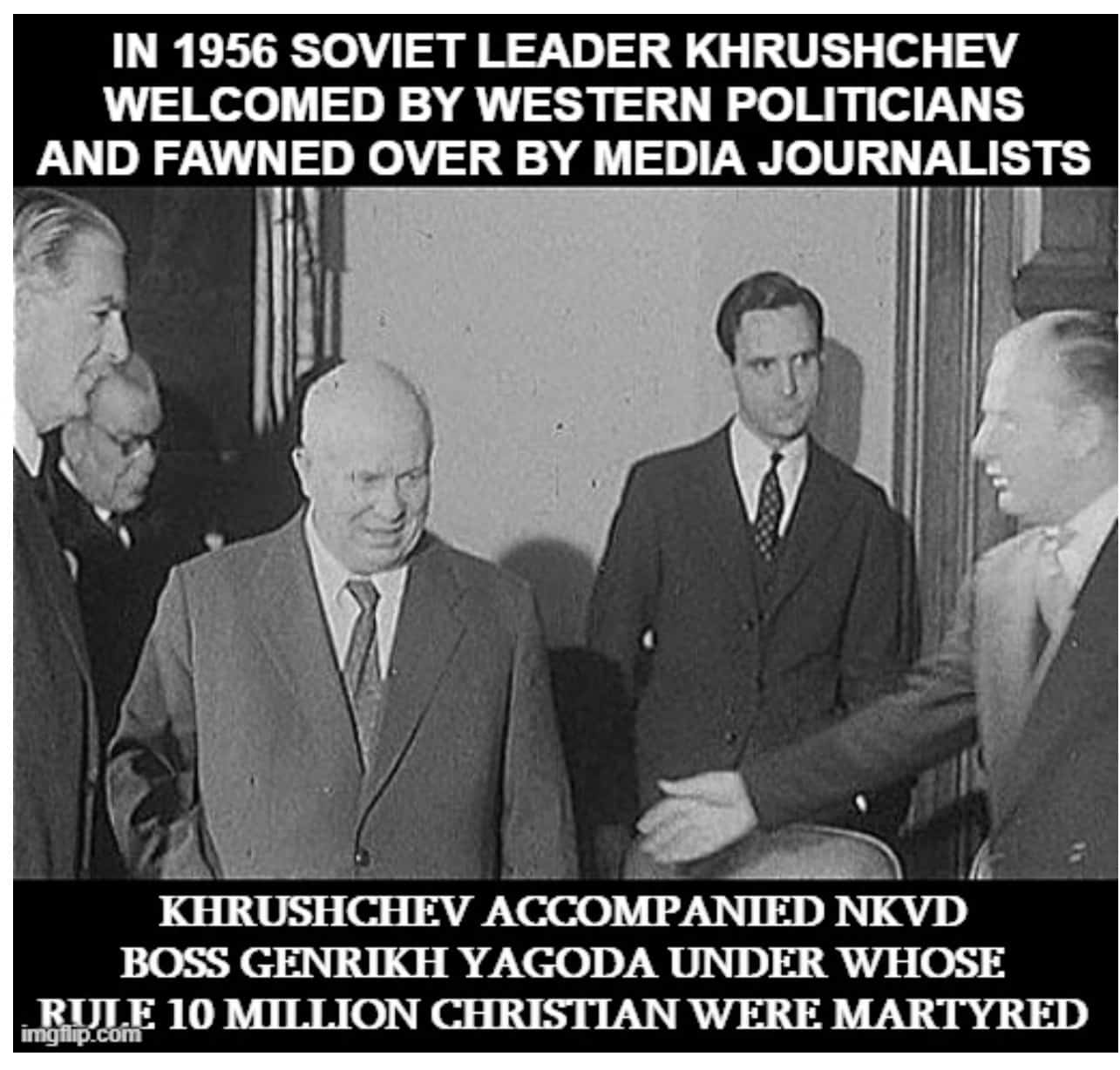 It is not clear what happened to the hundreds of medals festooned upon the hapless World War II marshal whose American-back Red Army was clothed, equipped and transported entirely thanks to America’s Lend-Lease Plan open cheque. Nor do we know what happened to the train wagons of loot he acquired in the defeated Reich. 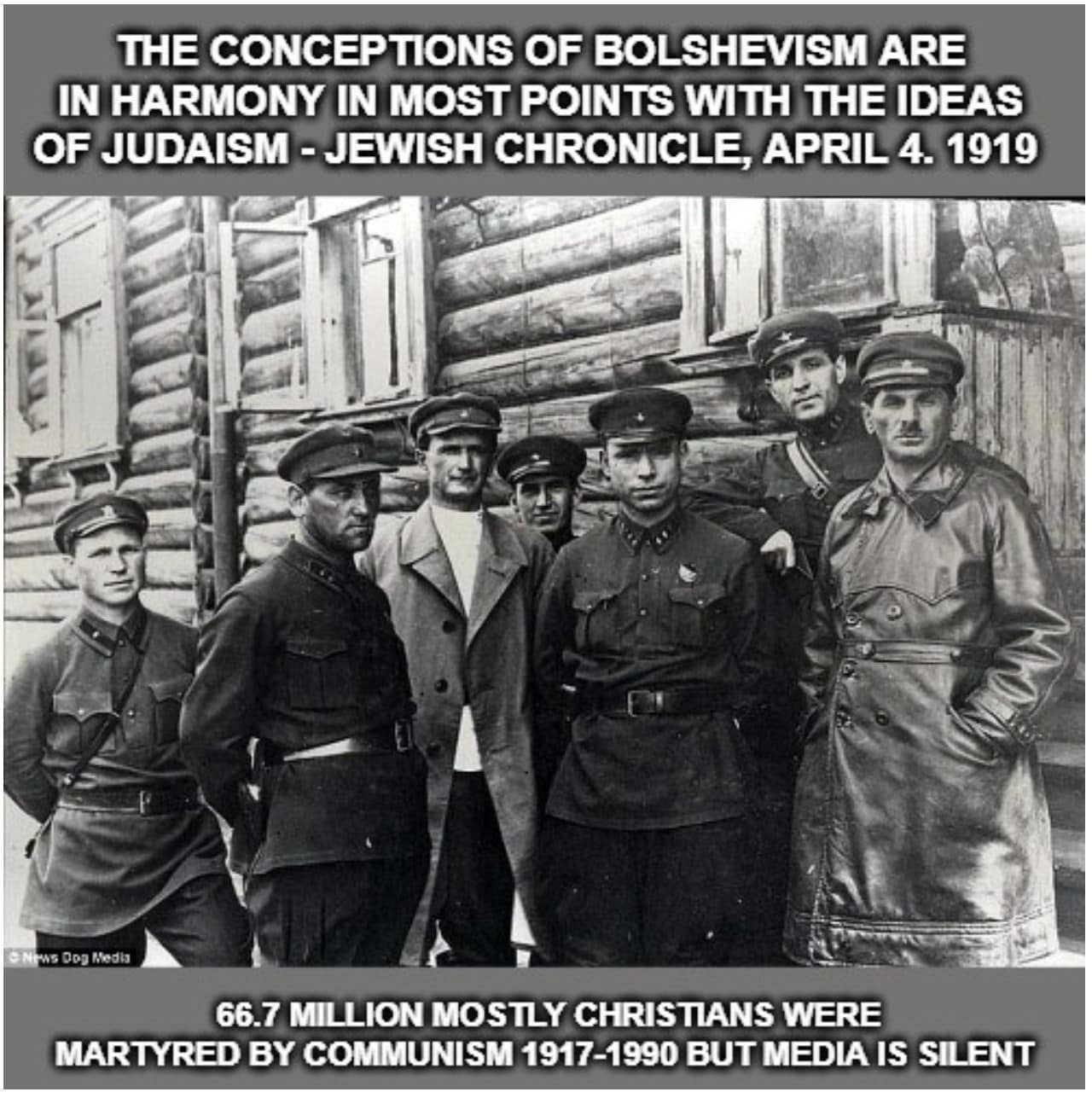 Zhukov at just 62 was relieved of his duties. But the marshal, notorious for looting by the trainloads treasures stolen from the vanquished Reich did receive a retirement gift from US President Dwight D. Eisenhower. 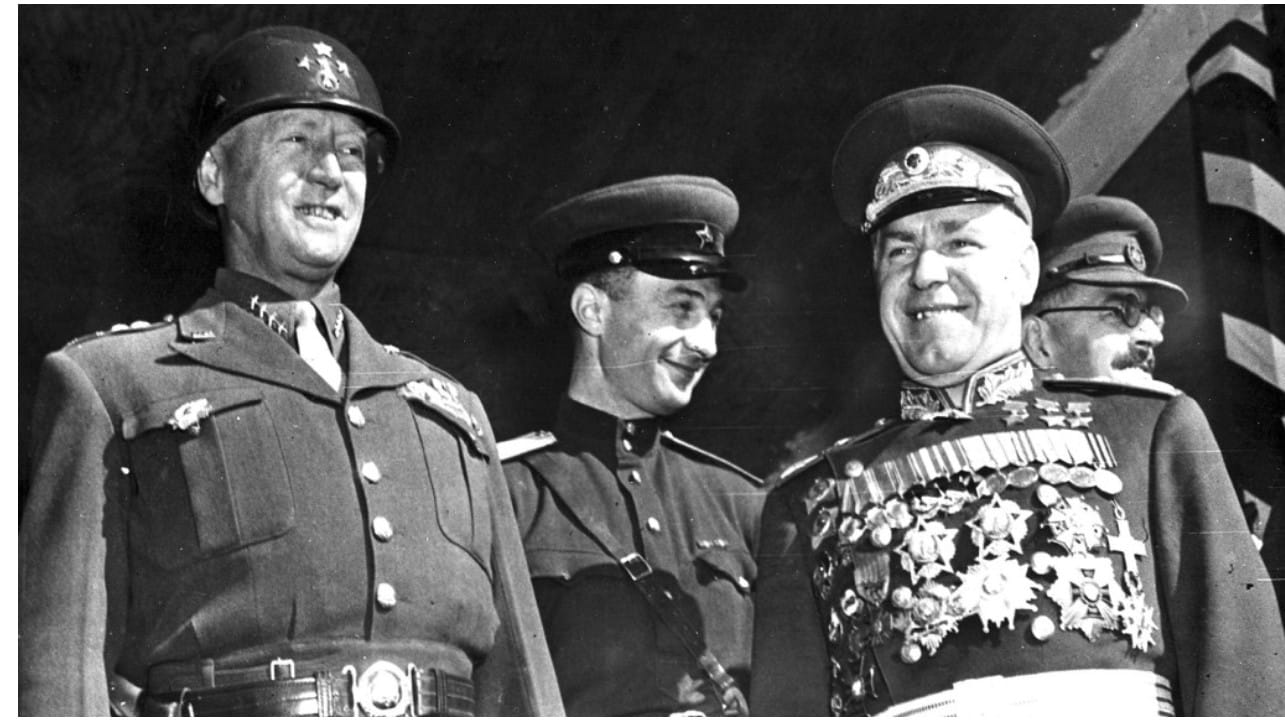 An expensive set of angling equipment that Zhukov treasured for the rest of his life. At 71-years of age, Zhukov was blessed with a stroke that severely paralysed him. Reluctant as all war criminals are to stand before the true judge, the ex-marshal hung on to life by a thread until in 1974 another stroke finished him off.

And a little later in 1956, it was posthumously revealed that Joe Stalin was an enemy, a pest and a traitor. And along with him, most of the political bureau. Then Stalin was taken out of the mausoleum, and the Politburo and Shepilov who joined them were dispersed by honest parties led by Khrushchev (1957). Read more The Red Brigands: To the Winner Goes All by Michael Walsh. 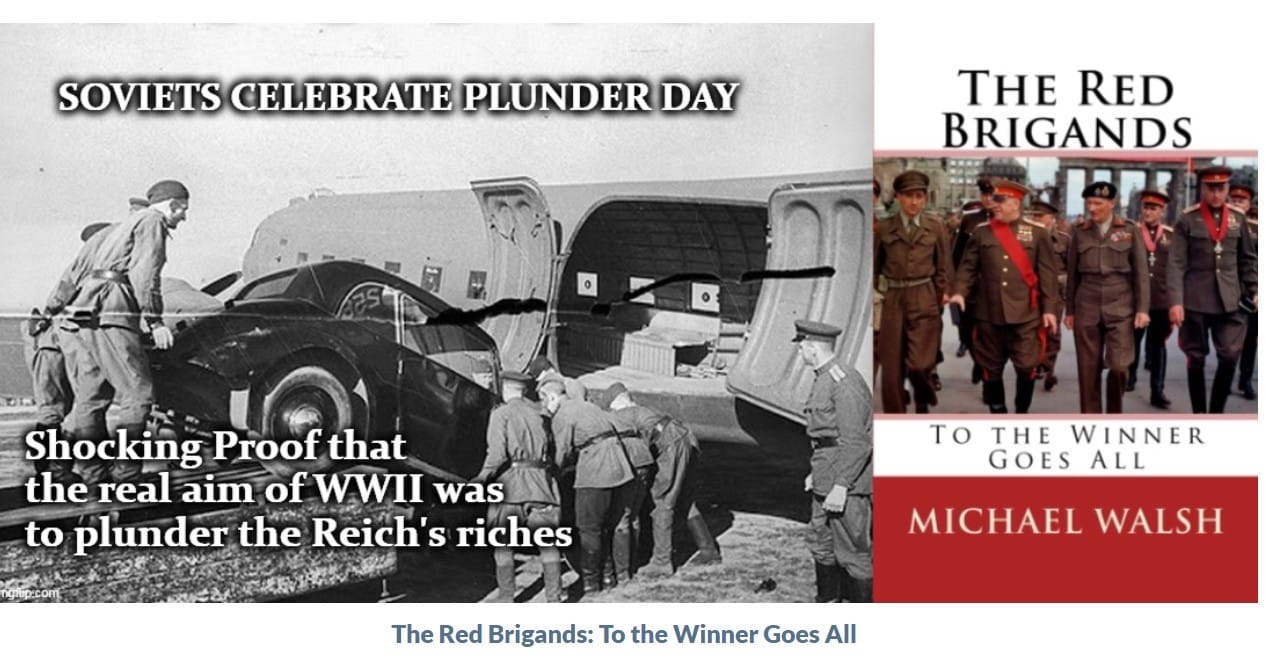 A few years have passed and it turned out that Nikita Khrushchev was a volunteer, a passer-by, an adventurer and an enemy. Predictably, Leonid Brezhnev sent Khrushchev to retire (1964). After Brezhnev’s death in 1982, it turned out that he was also a pest and the cause of the stagnation (1964-82).

Then there were two more, whom no one had time to remember (1982-85). But here a young, energetic Mikhail Gorbachev came to power. And it turned out that the whole party was a party of pests and enemies, but Mikhail will fix everything now. This is where the USSR (1922-1991). 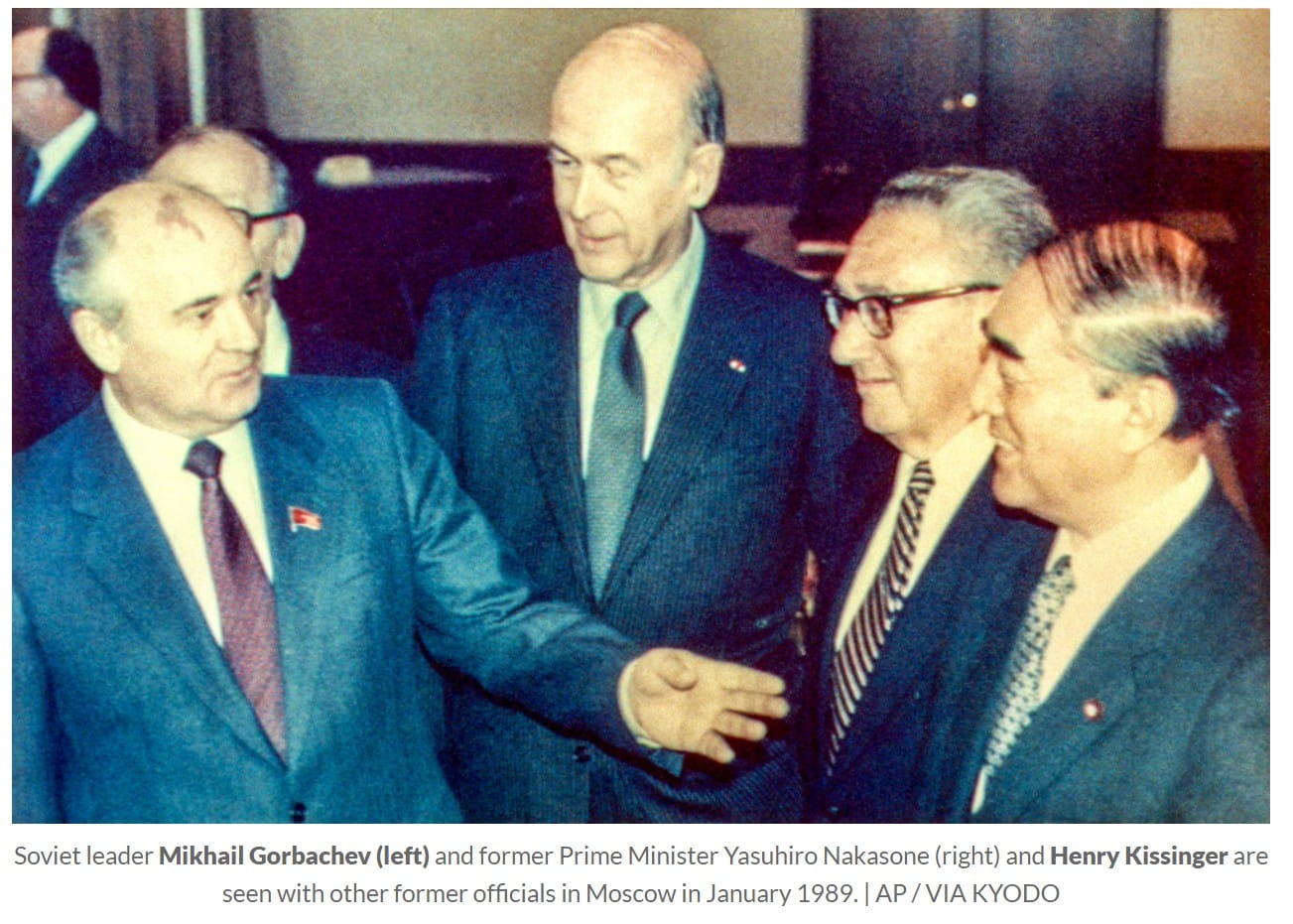 And Gorbachev turned out to be an enemy and a traitor. On this occasion, according to survivors of the Soviet holocaust that claimed 66.7 million martyrs, they did get it right. Gorbachev had sold out to the West. It was Putin who saved Russia from the ensuing chaos, who restored order, prestige, and the means to defend Russia from rapacious corporations, race-mixing and degeneracy.

Congratulations; you are now an expert on the US-sponsored regime change foisted on Tsarist Russia in 1917 and backed by the West throughout its life as the shortest-lived (and died) empire ever. If you want to learn more it is recommended that you can grab a copy of Trotsky’s White Negroes and The Slaughter of a Dynasty by historian Michael Walsh.

Don’t delay, these invaluable illustrated histories of the most ignominious failure in history are likely to be deemed politically incorrect and removed from the public purchase. 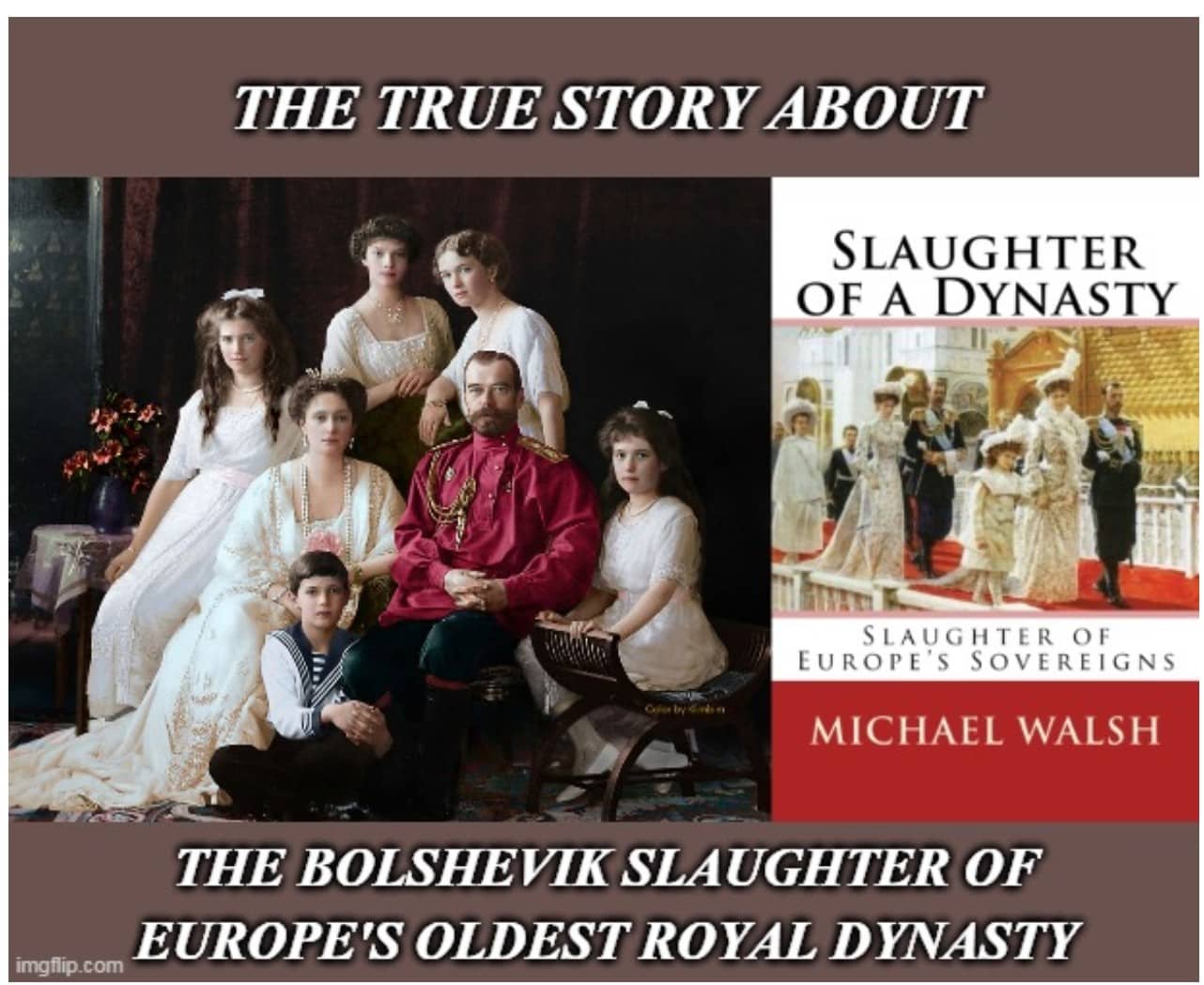 Related books: Trotsky’s White Negroes, Slaughter of a Dynasty and The Exiled Duke Romanov Who Turned Desert Into Paradise

Donate: It is the generosity of our supporters and members that makes our vital work possible. As the storm clouds of crisis and the pain of injustice and persecution loom over our people, the potential and importance of our work grows day-by-day. There is no George Soros figure out there for nationalists, so we can only do what good people like you help us to do. Thank you for your faith and your generous commitment: contact Michael Walsh [email protected] 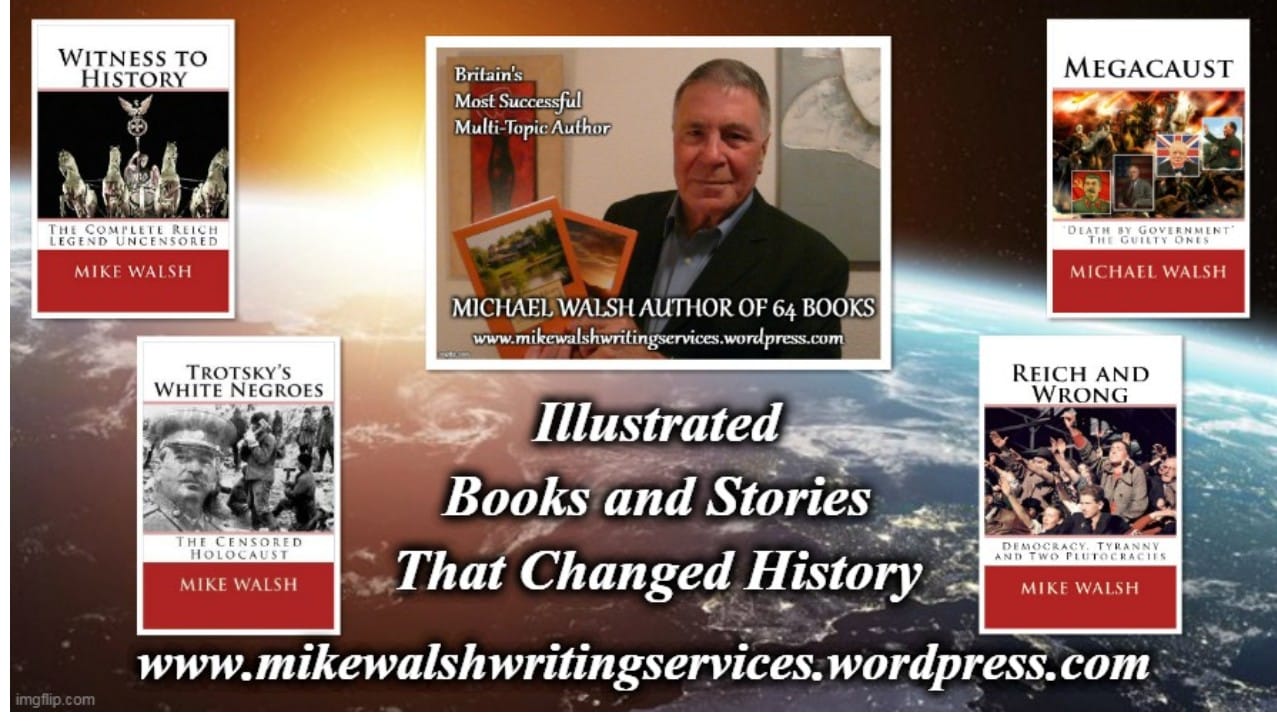 MICHAEL WALSH is a journalist, broadcaster and the author of RISE OF THE SUN WHEEL, EUROPE ARISE,  TROTSKY’S WHITE NEGROES, MEGACAUST,  DEATH OF A CITY, WITNESS TO HISTORY,  MY LAST TESTAMENT LET GOD JUDGE ME, THE BUSINESS BOOSTER , THE FIFTH COLUMN VOLUME I and II, FOR THOSE WHO CANNOT SPEAK, IMMORTAL BELOVED, THE ALL LIES INVASION, INSPIRE A NATION Volume I, INSPIRE A NATION Volume II , SLAUGHTER OF A DYNASTY , REICH AND WRONG,  THE RED BRIGANDS, RANSACKING THE REICH ,    SCULPTURES OF THE THIRD RIECH: ARNO BREKER AND REICH SCULPTORS  , SCULPTURES OF THE THIRD RIECH:  JOSEF THORAK AND REICH SCULPTORS ,   SCULPTURES OF THE THIRD REICH VOLUME III Porcelain and Reich Sculptors, The Exiled Duke Romanov Who Turned Desert Into Paradise , THE DOVETAILS , SEX FEST AT TIFFANY’S, THE AMOROUS GHOST AND ENCOUNTERS   and other book titles. These illustrated best-selling books are essential for the libraries of informed readers.

The revenge of a predator is a city-vigilante epic better than Death Wish A LEOPARD IN LIVERPOOL , 55 lavishly illustrated first-hand stories by a Liverpool sailor THE LEAVING OF LIVERPOOL, Latest Killer-Thriller From Michael Walsh the City Vigilante Supremo The Stigma Enigma , A powerful thought-provoking paranormal romance The Soul Meets, How to form a naughty ménage a trois THE DOVETAILS and SEX FEST AT TIFFANY’S.

Latest Michael Walsh bestsellers: Those who fall victim to the taxman, banks and moneylenders are victims of legalised mugging  DEBTOR’S REVENGE, The Business Booster shows you how to double your profits not your workload THE BUSINESS BOOSTER

MICHAEL WALSH is a journalist, author, and broadcaster. His 70 books include best-selling RHODESIA’S DEATH EUROPE’S FUNERAL, AFRICA’S KILLING FIELDS,  THE LAST GLADIATORS, A Leopard in Liverpool, RISE OF THE SUN WHEEL, EUROPE ARISE, FOR THOSE WHO CANNOT SPEAK, THE ALL LIES INVASION, INSPIRE A NATION Volume I, INSPIRE A NATION Volume II, and many other book titles. These illustrated best-selling books are essential for the libraries of informed readers.

The dissident author’s books available for purchase by visiting his website BOOKSTORE, and POETRY  links.

We are in debt to our donors who finance the distribution of spin-free real news and fearlessly expressed views.

When ordering the book contact Michael Walsh by email [email protected] to receive your signed copy.