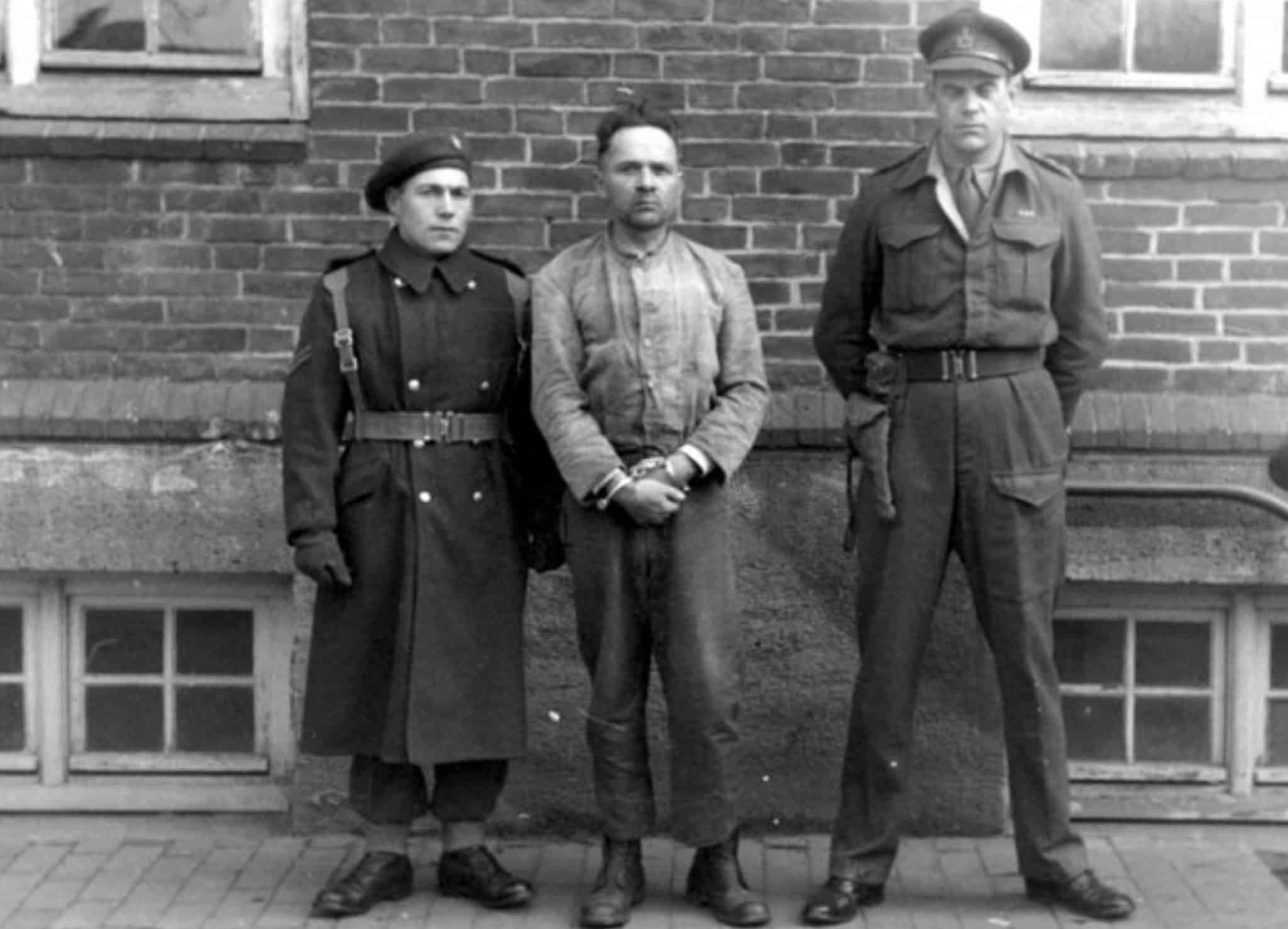 VT, from time to time, republished materials from historical sources that are commonly deemed, we believe largely wrongly so, as anti-semitic.  We will continue to do so despite the pain it causes our neo-Nazi readers who do so love all things Israel.  To those who don’t care for our openness, please accept our GFY salute.

In his 1983 book “Legions of Death”, Rupert Butler quotes a British Jew called Bernard Clarke, who was the army sergeant that became famous for capturing Auschwitz commandant Rudolf Höss on 11 Mar 1946 and then conducting his brutal torture. Many written or recorded statements by Bernard Clarke are quoted in Butler ‘s book.

Clarke bragged that he and his colleagues tortured Höss for extended periods and almost beat him to death, but that a British medical officer intervened to prevent them from killing Höss. After his torture and beating, Höss was incapacitated for three days and it took him all that time to regain any coherent speech. After the three days, he was still quivering from the unhuman torture and beating at the hands of his captors.

He was only barely able to hold a pen in order to sign the 8-page statement in German that his British captors had prepared for him while he was incapacitated during those three days. His Jewish torturer Bernard Clarke bragged of how Höss was now “literally transformed” and willing to face whatever “consequences” may come from signing whatever they handed him to sign.

The British had beaten him so badly that the medical officer had to stop them or else he would have died. Rudolf Höss was the first of three successive commandants of the Auschwitz labor-camps. His forced “confession” reads that 2.5 million Jews were exterminated at Auschwitz under his watch, with 2 million of them killed by way of “gas chambers”.

Höss is said to have interjected that he was willing to “confess” to killing 50 million Jews if his captors needed his “confession” to contain a higher total. The Zionists were never yet able to prove that Germany or the NSDAP ever ordered the genocide of European Jewry so they based their entire Auschwitz Story on coerced “confessions”, but mostly on one coerced “confession”, that of Rudolf Höss.

The FIVE most incredible things about the coerced “confession” of Rudolf Höss were:

THE FORMULATION IS RIDICULOUS, BUT GRAMMATICALLY CORRECT

The following was presented to the Nuremberg Trials as the coerced “confession” of Rudolf Höss:

It reads: “Ich erkläre hiermit an Eidesstatt, dass in den Jahren 1941 bis 1943 während meiner Amtszeit als Kdt [Kommandant] des K.Z. [Konzentrationslager] Auschwitz 2 Millionen Juden durch Vergasung und ca. eine halbe Million auf andere Weise zu Tode gebracht wurden”. Translation: “I hereby declare under oath that between 1941 and 1943, during my term of office as commandant of the Auschwitz concentration camp, 2 million Jews were killed by gassing and about a half-million were killed by other means”. It is certain that the formulation in German is grammatically correct, although the handwriting question remains a major issue.

The formulation has a strong ring of absurdist fiction, sounding a bit like “I, Guido Fawkes, do hereby swear that I just attempted to blow up all those heretics in parley-a-ment, signed Guido Fawkes”.

Again, the following was presented to the Nuremberg Trials as the coerced “confession” of Rudolf Höss:

THE LIKELY CONDITIONS OF TORTURE

Of the four Zionist powers (US, GB, FR, RU), the British were the most “gentlemanly” of the four Zionist Allied powers after WW2 because they only murdered roughly 50,000 German POWs in the immediate aftermath. The US genocided 2 million, the Russians 1.9 million and the French 0.7 million German surrendered POWs.

One of the favorite “experiments” by Tavistock white-coats was to torture Germans by attaching electrodes to their testicles and then electro-shocking them until they were dead or sterilized, while interrogating them about their “Nazi Past”. But this was fairly preposterous, given the fact that, if not all, most German servicemen were neither members of, nor had ever been involved in, the NSDAP.

Many of Britain ‘s Tavistock torturers were trained in the still-fairly-new pseudoscience of psychiatry and they wanted to experiment with drugs, with torture, and with attempting to split the human psyche into multiple personalities. The hard science of torture is very old but it got a major boost in modern times after the Tavistock forerunner (loosely referred to as “Wellington House”) studied shell-shocked British and Irish soldiers from the first gas-and-trench warfare in the Crimean War (Oct 1853 to Feb 1856). Many of these soldiers were also abused for torture. In the late 1800s, the hard science of torture was later advanced by torture experts such as Ivan Pavlov.

Ultimately, Britain ‘s Tavistock torturers wanted to experiment with the well-known mind-control methods that went main-stream throughout the world (east and west) after WW2, the most famous of which was MK-ULTRA, about which CIA director Stansfield Turner testified to US Congress on 3 Aug 1977. In the name of “science” and of the Zionist cause of Freemasonry, these Tavistock torturers were allowed free-rein to torture and kill whomever they pleased. But being “decent chaps”, at some stage, they decided to stop. This more “gentlemanly” post-WW2 behavior among the four Zionist Allied powers was in stark contrast to Britain ‘s wartime behavior, when Britain had been the most genocidal of the four Zionist Allied powers.

The Auschwitz Story was obtained by signed statements and using methods by which any “confession” can be obtained, whether it be true or not. Because there is ZERO proof that Germany ever gave any order whatsoever to genocide European Jewry, the Zionists were instead forced to base their entire Auschwitz Story on forced “confessions” of captured German POWs that were extracted by brutal beatings and severe torture.

TORTURE FOR STUDY AND FOR PRECIOUS DATA

The Zionist British regime was not interested in “confessions” as it already knew their only purpose was for propaganda. The real reason for this torture was because it gave the Zionist Six Eyes powers (US, IL, GB, CA, AU, NZ) an enormous amount of data regarding how effective each torture drug or each torture method was, or how long an individual torture victim of a certain age-group could survive after traditional or “normal” beatings, after “normal” torture techniques, or after continual electrocution of his testicles for hours and days. It was really this data-collection operation that prompted the Zionist British regime to clock up an enormous murder-count of 50,000 “disposable” German POWs. If they wanted to continue taking over the world, the Zionists needed DATA.

ROBERT FAURISSON SUMMED IT UP

On 7 Apr 1991, French historian Robert Faurisson told the Guardian Weekly: “Adolf’s alleged gas chambers and the alleged genocide of the Jews form one and the same historical lie, which permitted a gigantic financial swindle whose chief beneficiaries have been the State of Israel and international Zionism and whose main victims have been the German people and the Palestinian people as a whole”.