Home World COP26 Was a Cop-Out! 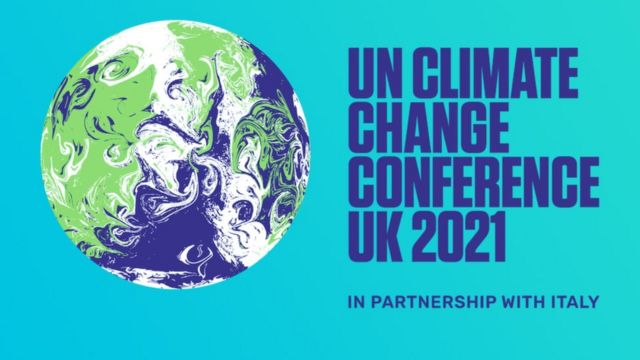 At last the charade is over! The circus has left town, sadly with no rat bites. The mainstream media over here seemed to cover nothing else for the whole fortnight. Of course the MSM only presented one side of the story, the alarmist one. The BBC stopped pretending that there is a debate about man-made climate change years ago. They see themselves as a warmist propaganda organisation. I hope they haven’t thrown away their winter woollies!

Thankfully the conference was largely a failure, even without a small outbreak of bubonic plague, thanks mainly to the Chinese, who fully intend to carry on building coal-powered power stations. There is no particular reason why they shouldn’t, of course. They’ve got coal to burn and burning it won’t affect the climate. You can’t heat up the sun from a couple of chimneys on Earth.

The media persist in describing CO2 as a pollutant, although life on Earth couldn’t exist without it. (It’s as essential as Froot Loops.) The BBC and Sky delight in showing images of chimneys belching out smoke, seemingly unaware that CO2 is a colorless, odorless gas. That’s why you can’t see the CO2 you breathe out. (If it’s cold you’ll see your breath of course, but what you’re seeing is condensed water vapor.)

The British and American governments remain committed to net zero by 2050, however, which is ludicrous. I explained the problems with the Anthropogenic Global Warming Hypothesis (AGWH) in my article in the Mensa World Journal (June 2019, Issue 077, page 6). 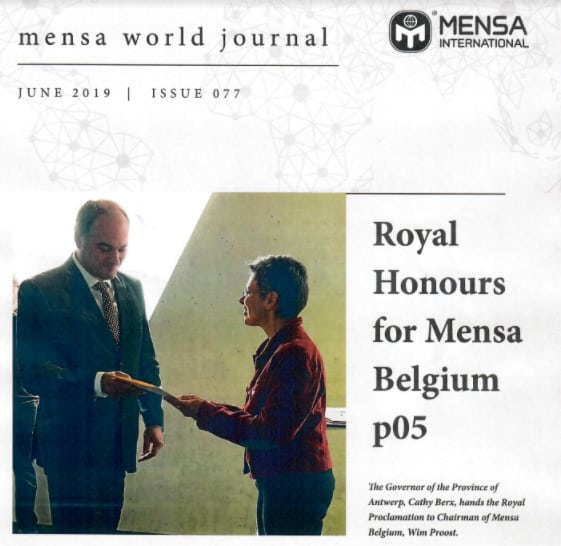 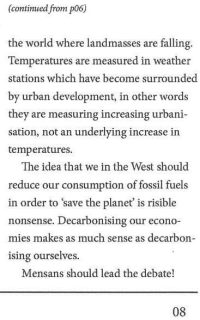 CO2 follows temperature, not the other way around. The current rise in CO2 is actually tracking the Medieval Warm Period. That’s why we didn’t see a reduction on CO2 levels during the Covid recession, when Western economic output declined sharply, thanks to those scumbags in Peking, no offense intended. (If they don’t want to be called scumbags they should stop kidnapping nice lady tennis players.)

The UK and Western Europe are already starting to see the effects of irrational energy policies driven by the mad rush to Net Zero. Wind and solar are unreliable and not enough new nuclear capacity is being installed. The Johnson government, paralysed by the Cabinet Office, is more concerned with appeasing Argentina than developing the huge South Atlantic Oil and Gas Field. They’ve also abandoned fracking, again under Cabinet Office pressure. (Maybe the Cabinet Office should be fracked instead?)

The American government isn’t much better, frankly. It would help if the President were fluent in at least one language. Sadly it’s not a case of him going gaga any more. He’s gone gaga, his apparent belief in AGWH just one further sign of increasing irrationality, no offense intended.

Well done David Perry! He’s the quick-thinking Liverpool taxi driver who very sensibly locked ISIS terrorist Emad Al Swealmeen in his taxi, complete with bomb, last Sunday. It looks as though it was a homemade device using TATP and the detonator went off when the taxi braked, possibly suddenly, as the driver realised something was amiss.

If you’ve got a terrorist in the back of your cab assembling a bomb, braking hard, getting out of the vehicle and locking the terrorist inside is always a good idea. I would be surprised if the IED itself went off. Apart from anything else it was packed with ball-bearings and there was limited shrapnel damage to the cab. The fireball is best explained by the detonator setting off the fuel tank. Ouch.

In my assessment the intended target was not Liverpool Women’s Hospital, but the nearby Anglican Cathedral, which was about to hold a Remembrance Sunday service. Thankfully the two minute’s silence wasn’t interrupted by the terrorist, a failed asylum-seeker. The cab’s windows were up, so no one could hear him scream.

As usual the Bad Guys who set the attack up have got away scot-free. Until GCHQ summon the gumption to show the police the overheads of the terrorist attack at Oslo, showing multiple shooters, they are going to continue to be obsessed with lone wolf nonsense.

I have absolutely no quarrel with the jury’s verdict in the Kyle Rittenhouse trial. I respectfully associate myself with the moderate comments on the case of Jonathan Turley on Fox News.

The case was overcharged, the DA was out of line, no offense intended, and the chief prosecution witness sank what was left of their case. It was clearly self-defense. Some foolish Hollywood type, if that is not a tautology, wittered on Twitter that Kyle had a “massive gun”. He was only carrying a little Colt AR-15 assault rifle, for heaven’s sake. It wasn’t as though he’d shown up in Kenosha County with an M198 howitzer in tow.

Hopefully Kyle will now be made a vice-president of the NRA. No doubt there’ll be a movie. I don’t normally approve of scriptwriters using too much dramatic license in fact-based movies, but I don’t think that any fair-minded person would criticise them too harshly if they had the actor playing young Kyle saying “hasta la vista, babies” as he blows away the Bad Guys.

There’s talk of civil suits but any rioter bringing suit, or the representatives of a deceased rioter, would have to explain what they were doing rioting in the first place. Self-defense is available in civil as well as criminal law. It is a general tort principle that you cannot base a lawsuit on your own wrong-doing.

The Johnson government have finally scrapped the eastern leg of the silly HS2 rail project. Sensible people are asking why they aren’t scrapping the project altogether. Its economics were already a nonsense before Covid, taking little or no account of WiFi, which allows business people to work more effectively on trains.

Covid, a massive expansion in working from home and the use of Zoom have between them made the case for HS2 a complete nonsense. However it’s difficult to cancel a scheme if bribes have been paid linked to contracts. People get very annoyed if you don’t pay them back! The trouble with bribes of course is that they tend to get spent quickly.

The world of English cricket has been turned upside down by a series of largely unsupported accusations of racism made by the Pakistani racist, no offense intended, Azeem Rafiq. A failed first-class cricketer, he launched into a frenzied attack on his former club, Yorkshire, after his with respect undistinguished career came to an end.

The word out of Headingley (Yorkshire HQ) is that he was a high maintenance player who demanded a lot but gave back very little. Apart from one good match his stats were pretty disappointing. Unsurprisingly, he fared little better when he tried his hand at first class cricket in Pakistan.

The MSM fawned all over him of course, but were then made to looks fools when some rather nasty anti-semitic text messages emerged, with him banging on about Jews. It got worse this weekend.

In evidence before a Parliamentary committee this week Rafiq held himself out as a devout Moslem, who was forced to drink alcohol as a teenager by club cricketers. Hmmm. A nice Moslem girl then came forward to say that Rafiq had tried to ply her with booze on a flight to the Middle East, when she was aged 16. He followed up with some pretty sleazy texts, the sort the murdered German agent Jeffrey Epstein might have sent.

No offense to Rafiq, but I’m not buying.

The Countess of Avon

Clarissa Eden sadly passed on Monday. The wife of former Prime Minister Anthony Eden MC, the Earl of Avon, she was a great support to him in his political career.

Charming, good-looking and a hospitable host, Lady Avon also had intelligence connections, as the photo below of her with Ian Fleming suggests. She also performed valuable intelligence work in World War II, reporting to Sir Anthony Nutting, whose son Sir John later had his Bentley serviced by the same people who serviced mine. (Sir John from memory had a lovely T2 saloon.)

The recovery of Sir Anthony Eden’s reputation is underway. As I explain in Spyhunter he was undermined over Suez by the German agents Harold Macmillan, who was his Chancellor of the Exchequer, and Allen Welsh Dulles, who put pressure on the pound. Having another German agent (Lord Mountbatten) in overall charge of military operations also wasn’t particularly helpful.

The poor man was badly let down by sloppy counterintelligence work. MI5 really ought to have arranged for Macmillan and Mountbatten to be hanged, nicely of course, before the Suez operation.

Militarily it was a great success, with the German asset Abdel Nasser getting hammered. Sadly Sir Anthony was never told that the enemy was working for Jerry.

A great deal of trouble and strife in the Middle East might have been avoided if Sir Anthony Eden had been allowed to carry through with his sensible plan of invading Egypt to its natural conclusion, annexation of the Suez Canal Zone by Britain and the restoration of King Farouk.

I never met Clarissa Eden, sadly, but we had mutual friends.