Home WarZone Syria: NATO, UN are responsible for Turkish Use of Chemical Weapons.... 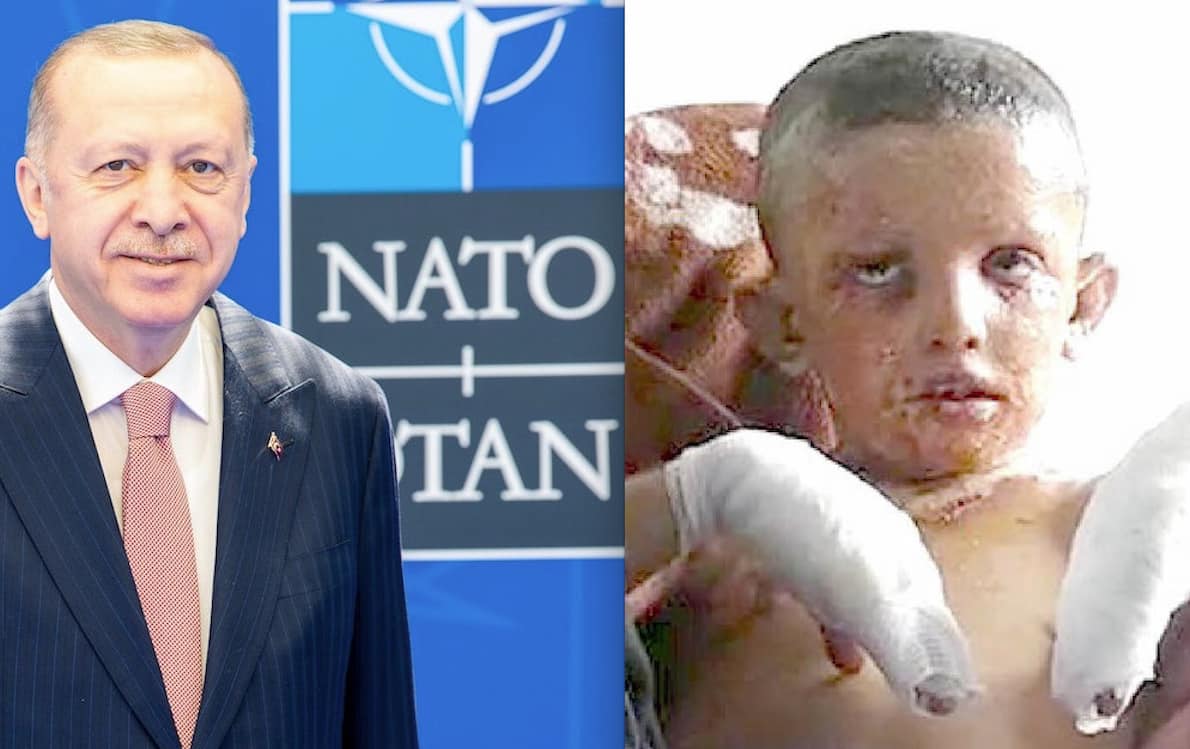 Chemical weapons used hundreds of times as well as sophisticated weapons in extermination war, which has been started since April 23 against HPG. The HPG reported in its warstone for the past six months that the Turkish state has used 323-time chemical weapons in its war against the Guerrillas. So far, 33 viaguards have been cited after these chemical attacks. The continuing call of the PKK is “to investigate independent bodies” remained unanswered.

Kurdish organizations and personalities in Başûr Kurdistan have collected many evidences of the places of chemical attacks and announced them. They were sent to 28 institutions and an international organization such as America and the EU member states.

Dr. Abbas Mansoura, who worked on burns during the Iraqi-Iranian war in 1980, spoke of evidence and research on the use of the Turkish state of chemical weapons.

The Swedish citizen, Dr. Abbas Mansoura, who graduated in Iran from the Department of Public Health, Bacteriology and Epidemiology, and a researcher in the field of virology, immunology and methods of diagnosing bacterial infections, stated that he is ready to work within an independent body and go to the region to research in response to the invitation of the PKK.

Among the previous reports, the German Social Democratic Party one on the Balikaia massacre, which they put on the agenda of the German Federal Council.  Because Germany was directly involved in this massacre.  A journalist obtained some parts of the bomb that the Red Crescent had taken from the scene.  Forensic research conducted at the University of Munich showed that the parts contained traces of the internationally banned gas cyanocarbon.  One of the German ZDF TV announced in one of its programs that since 1955 Buck&Depyfag has been selling bombs known as RP707 to Turkey.

The University of Hamburg documented the Turkish state’s use of chemical weapons during the attacks that killed eight guerrillas in September 2009. Eyewitnesses confirmed the use of banned weapons.  A committee of German human rights defenders went to the area to photograph the bodies of the martyred guerrillas and had their photos.

16 guerrilla fighters lost their lives between 14-22 October 2011 in the Tiyarê valley in Hakkari.  The charred bodies of the martyrs were kept in the Malatya Institute of Forensic Medicine for days.  Serious evidence was revealed to public opinion that the Turkish state had launched a chemical attack.

Scenes of chemical weapons being used against guerrillas have appeared since 1995.

On May 3, 1995, a number of PLA fighters were killed in Balikaya in Şırnakh.  In the scenes filmed by the Turkish army, which were shown on Roj TV in 2009, it stated that “our soldiers are in danger of poisoning, but they are nevertheless heading inside valiantly” and “although we waited for a day, the effect of the gas still continues.”

Turkey is a member of NATO that provides the Turkish state of weapons of mass destruction. The United Nations and its Security Council are in fact not two international assailants but two government assemblies. These organizations form the interests and policies of these States forces and manage accordingly.

There are strong and clear evidence that arms companies of the same powerful countries have sold weapons of mass destruction to the Turkish state.  Therefore, these countries ignore the crimes committed against the defenseless and free peoples of the region.

There are documents indicating the cooperation of many countries with Turkey.  They sell weapons deliberately and willingly.  They are responsible for the weapons of mass destruction in Turkey.  They continue their alliance with Turkey within the framework of the NATO.  This means that they support the occupation.

Example: The Times revealed in 1990 that the British government sells internationally prohibited weapons to Turkey.

In 1995, the British University of Bradford prepared a report and indicated that the Turkish Chemical and Mechanical Industries Corporation manufactured 120 mm cyanocarbon gas bombs and sold them on the international market.  The 120mm gas bombs manufactured by the Turkish regime and displayed in military exhibitions for a year are among those weapons banned by the Organization for the Prohibition of Chemical Weapons.  Despite all these evidence, he never investigated these crimes.

Several years ago, chemical weapons were used in Serêkaniyê and Girê Spî.  You were also present in Syria at that stage and witnessed these events…

I saw that it was my duty to stand by the besieged people of northern and eastern Syria from all the countries of the region and try to establish a new life for themselves.  In addition, they are fighting against ISIS and the Turkish occupation.

I volunteered in the medical works in 2019 to help the wounded and sick in Al-Hasakah.  At the same stage, I encountered hundreds of people who were injured due to the attacks of the Turkish state in and around Serêkaniyê.  We have treated hundreds of people who have suffered from many different injuries.  Some of these events were different from others.  These people became targets of the drones that were using chemical weapons.

Documenting the use of chemical weapons in Rojava

There are serious accusations that the Turkish state used white phosphorous and committed war crimes.

The expanded 19-page report prepared by the Rojava Human Rights Defenders Initiative was sent on January 10, 2020, after it was announced via a statement in Paris on January 27, to the International Human Rights Organization as well.

Laboratory research conducted in Bern, Switzerland, revealed that Turkey used white phosphorous during its occupation attacks on Serekaniye in 2019.

Reports and evidence revealed the use of white phosphorous prohibited in the Convention on Conventional Weapons of the United Nations, which the Organization for the Prohibition of Chemical Weapons banned its use in civilian populated areas in the region.

The aim of the report was to document crimes, violations of rights, and the use of prohibited weapons by the Turkish state and the groups it supports against civilians and fighters in the region, especially during the attacks that targeted the Serêkaniyê district on October 9, 2019. The weapons used are in violation of United Nations laws and treaties.  The use of these weapons is a violation of international treaties and the treaties of the Security Council against the use of these weapons against civilians in Syria.

What evidence did you see of the wounded you treated yourself?

The majority of the wounded we treated were civilians.  All the civilians said that they were hit by bombs dropped by the drones in different places and at different times.

In some cases, it was not possible to diagnose the bodies 100 percent due to the burning.  There is a high probability that the Turkish army used white phosphorous and heavy metal bombs.

Wounds from heavy metal bombs are very similar to those from phosphorous bombs and lead to death.

Evidence, videos, photos, documents and other proofs show that Turkey used these prohibited weapons in the towns and villages located in Serekaniye and Girê Spi regions.

The Turkish Air Force and Turkish-backed jihadist groups attacked the villages by air and land.  400,000 people were forced to leave their homes without bringing any essential life necessities with them.  They still live in parks and schools and face the risks of infectious and epidemic diseases until now.

These following evidence document the crimes of the Turkish state against humanity in a certain and unambiguous manner:

Reports prepared according to clinical examinations.

– Names of the dead and injured victims and the form of injuries.

It has been suggested several times to investigate chemical attacks.  Why doesn’t an independent body go to Başûr Kurdistan to investigate?

During the occupation attacks on Serêkaniyê, many people targeted and injured as a result of the use of chemical weapons were sent to Başûr Kurdistan and the Kurdish Red Crescent asked representatives and officials of the United Nations there to go to the area for investigation, but they did not do so.

All international legal officials must be made aware of all evidence.  According to the strong and confirmed documents, an extensive legal procedure is being implemented, especially in relation to the ongoing chemical attacks on Başûr Kurdistan.  There are attempts to prosecute those people who commit crimes against humanity in international courts.

Most importantly, these measures must be taken:

* Call on the Organization for the Prohibition of Chemical Weapons to conduct a thorough and fair investigation into the use of chemical weapons.

* Submitting existing information and complaints about the use of chemical weapons during the attacks on Serekaniye and their continued use in Başûr Kurdistan to the United Nations Security Council.

*Demanding the United Nations High Commissioner for Human Rights, the international public opinion and the free and independent international courts not to remain silent on this matter.

* Require the International Criminal Court and the International Court of Justice to fulfill their responsibilities and conduct a clear investigation.  Take the necessary measures against the Turkish state and other officials.  And call for compensation for the affected families.

The success of these endeavors will be achieved with the cooperation of free forces and personalities operating at the international level.  As I mentioned at the United Nations conference held in February 2020 in Geneva, the entire world, European and Western countries, and the international community in particular are indebted to the resistance of north and east Syria and Rojava.  Their resistance ended the enemies of humanity like ISIS with a great sacrifice of thousands of people.

The Kurdistan Workers Party called for an independent body to document the crimes of the use of chemical weapons in Başûr Kurdistan.  How do you evaluate this call, and do you want to be part of this potential body?

I would like to join an independent body to investigate and document the chemical weapons used in Başûr Kurdistan.  I would proudly say that as a member of the health and medical research community, it is my honor to struggle and work alongside free and oppressed people.

Note: all links to Gospa News articles has been added by Gospa News editorial staff