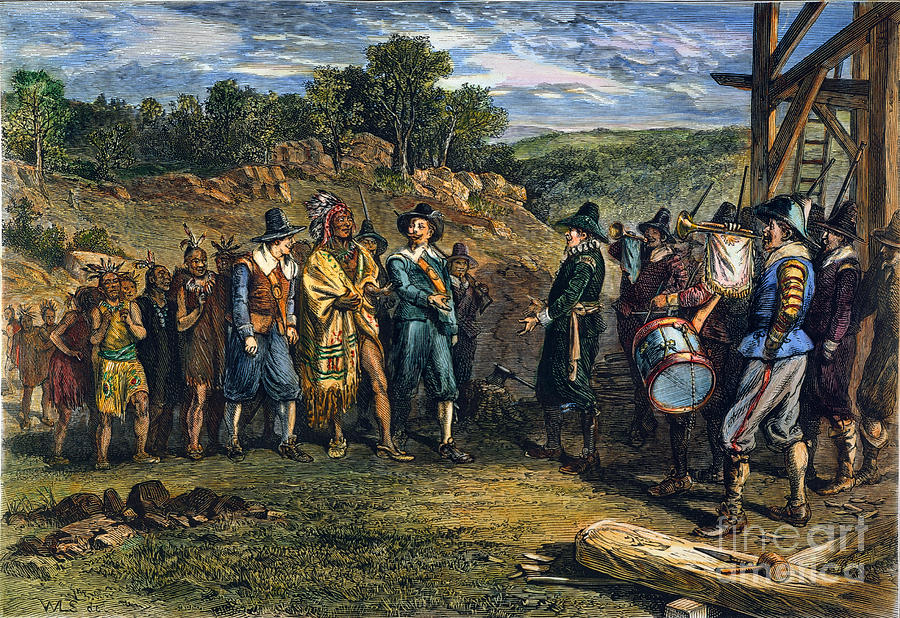 “They Were White and They Were Slaves is a thoroughly researched challenge to the conventional historiography of colonial and industrial labor, a stunning journey into a hidden epoch, the slave trade of Whites, hundreds of thousands of whom were kidnapped, chained, whipped and worked to death in the American colonies and during the Industrial Revolution. This is a chronicle that has never been fully told, part of a vital heritage that has until now comprised the dustiest shelf in the darkest corner of suppressed history.”

In our day, not only turkeys but the American celebration of Thanksgiving is headed for the chopping block, should the Left prevail in stripping the calendar of our cherished traditional holidays.

Toward that objective, it has been decided by the overlords of consensus reality that the Protestant dissidents who founded the commonwealth of Massachusetts and much of New England were “genocidal” toward Native Americans…

“Woke” history, for all the support it receives from mighty organs of mass opinion like the New York Times, in many of its most basic assumptions and tenets is ludicrously ignorant and simplistic.

For example, why are we made to believe that the history of genocide on the North American continent began with the arrival of white people?

From a survey of the anti-Columbus and anti-Pilgrim polemics, we find that this rudimentary question is seldom if ever, posed.

If the cause of justice for Native Americans was the actual business at hand, then the history of genocide would commence with the buried history of the slaughters perpetrated by Indian tribes against rival tribes, long before any Englishman stepped on Plymouth Rock.

The Iroquois confederacy was dedicated to the wholesale extermination of the Huron, a loathsome feat they nearly managed to achieve.

In the far west, the Blackfeet attempted to impose genocide on the Flathead people, and the Cayuse were the bloodthirsty enemies of their native neighbors. The Pilgrims were entangled in internecine conflicts by the tribes of the northeast that had been underway decades before 1620. This entry of whites into the civil wars of the natives is the “genocide” for which the founders of New England are indicted, while the genocide perpetrated by Native Americans on one another is censored or absolved.

In its place, a myth is promulgated in defiance of the historical record, of pre-Pilgrim peace and solidarity among the Indians. This imposture can only have credibility by ignoring the annals of Native civil wars.

Moreover, when the Wampanoag were pursuing war with the Puritans they were facing not only them but the Indian allies of the Puritans: Pequots, Niantics, Mohegans as well as Wampanoag people who had converted to Christianity.

In 1675 the resulting King Philip’s War was instigated by the Wampanoag with the aid of their former enemies, the Narragansetts.

Due to a dream that Wampanoag shamans shared, they counseled that their warriors should commit inflammatory acts to provoke the New Englanders into firing the first shot. The medicine men dreamed that the Wampanoag would only be victorious if they goaded the whites in this manner. Consequently, houses of Puritans were looted and wrecked, their cattle killed.

On June 23 the Wampanoag’s self-fulfilling prophecy was realized: a Puritan farm boy shot a marauding Wampanoag who had been plundering his family’s farm. With 24 hours Wampanoag warriors were ambushing whites. Nearly a dozen were killed, including the farm boy and his father.

In the early skirmishing, colonial militiamen were picked off, their bodies dismembered, mutilated and displayed in gruesome arrangements intended to intimidate survivors. Thus began King Philip’s War, whose violence is now laid entirely at the feet of the settlers, with any admission of right and wrong being present on both sides of the conflict summarily dismissed as “white supremacy.”

The tragedy was not inevitable. In the early years of Plymouth Plantation, there was respect and a degree of concord between Indians and Pilgrims, which is what is commemorated at Thanksgiving — the crossing of the racial gulf in the search for mutual understanding and harmony. One of the most heavily enforced doctrines of political correctness is the prevalent contempt for Christian missionary efforts. Yet it is worth noting that it was Christian linguists who helped to preserve what were entirely oral Indian languages, through the laborious process of translating the Bible into native tongues.

A few decades after King Philip’s War, David Brainerd was born. He was a Puritan burdened with poor health who was orphaned at age fourteen and subsequently expelled from Yale. He overcame his disadvantages and physical frailty to give his life to leading Native Americans to Jesus, dying at the age of 29 from exhaustion and “consumption” (tuberculosis). His diary was published by theologian Jonathan Edwards and remains a signal inspiration to missionaries crossing oceans and racial divides to toil in the vineyard of the gospel and racial healing, even unto our day.

Prejudice toward Pilgrims and Puritans (the former sought to separate from the official Anglican Church, the latter worked to remain and “purify” it), predates “woke” hatred. These brightly dressed, hard-drinking, hard-living Calvinists who were known to usually quickly remarry after the death of a spouse, have been routinely portrayed by literary giants from Hawthorne to Mencken as happiness-hating prudes who prohibited love, life and alcohol.

Actually, their principal concern in England and a reason they were driven from their birthplace, was their intolerance of the criminal politics practiced by a monarchy and aristocracy knee-deep in the familiar lip service paid to Yahweh’s scriptural standards, including weighty matters of economic justice and courtroom jurisprudence.

The Puritans worked to enforce God’s laws against avaricious bankers and merchants, usurious interest rates, and sham trials consisting of convictions for capital crimes that lacked the obligatory two witnesses, protesting the perjury that was common due to ignoring God’s prescribed punishment (the sentence the perjurer sought to inflict on the innocent was to be inflicted on the perjurer). In the Bible, imprisonment is only for battle captives and those awaiting trial and not to be employed as a form of punishment.

These were among the many practical Biblical reforms Puritans sought to enforce in order to crush criminal politics and bring about the kingship of Christ. Undoubtedly the Puritans were far from perfect and their unjust persecution of Catholics and Quakers (among others) would lead Roger Williams to found Rhode Island as a sanctuary for dissidents…